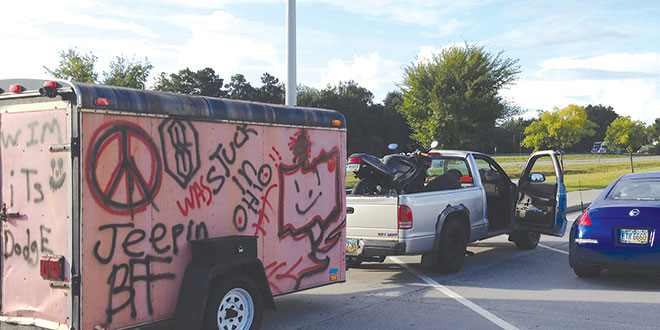 In one final marathon road trip to Ohio, we brought the boys and their toys back home to Goodland. PHOTOS BY MELINDA GRAY

I have to admit that I wasn’t ready; it seemed like only a few weeks had passed since the original plan was laid. The last six months have flown by, though, and now my family is finally back together again. My two younger brothers, Chris and Tyler, and yet another dog, have joined our already busting-at-the-seams household here in Goodland until further notice.

I love my brothers dearly, but this isn’t the first time we’ve lived together and heavily relied on one another. I would be lying if I claimed that it’s ever been easy. Our 15-year age gap compounded by a healthy dose of sibling rivalry has made for many tense moments in co-habitation. Still, I’ve missed them terribly, and I am happy they’ve made the permanent move, bringing us all together again.

So without further ado, I figure it’s time to introduce them before the bustling activity of season begins; and since I’m fairly shy, writing about them in the comfort of my prose is the only way I know how. As in any family, my brothers and I share some characteristics and quirks, but we are also vastly different.

Chris is our family’s middle child at 23 years old. He can be high-strung 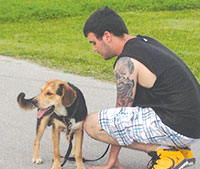 The ‘baby’ of our family, Tyler, and his dog Krypto, have been taking daily walks to learn the lay of the land.

and neurotic, but I admire him because he fully commits himself to anything he sets out to accomplish. He finished studying to become an auto mechanic in half of the normal time by doubling up on classes and work.

I managed an auto detailing shop for five years before going to college; I’ve always loved cars. As a child, he put in quite a few 11-hour days following me around the shop, helping and asking questions. Even at a very young age, he showed interest in the mechanics of things, asked questions and remembered everything I explained to him. He had his job at Toyota in Naples lined up months ago, and in his off-time, he gladly lends his mechanic skills to anyone who asks.

My 21-year old brother, Tyler, is much more like me. He’s shy, laid-back and impulsive — a home-body still unsure of what he wants to be when he grows up. He has followed in mine and Chris’s footsteps to an extent, working in both auto-body collision repair and detailing, but it’s obvious that his true aspirations lie elsewhere.

It’s an odd feeling to be looked to by others for expertise and direction in a place that’s still so new to me. Neither of 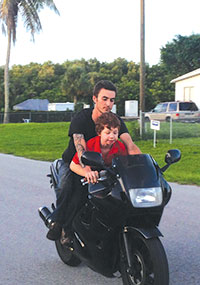 With frequent motorcycle rides and more Xbox games to share, my son sure is glad to have his Uncle Chris around again.

them enjoys hanging out in bars, partying or even drinking alcohol, and I respect their choices. Unfortunately, though, living in Goodland limits their options for extra-curricular activities and socializing. They have dirt bikes and motorcycles, and nowhere to ride them.

Their chronic boredom has affected the mood around our tiny two-bedroom abode, and it has me reaching out to find anything to entertain them, hoping they will meet people their age with similar interests. As a family, we are frantically searching for a rental that they can afford closer to Naples. It’s only been two weeks, but the close living quarters has everybody craving their own personal space.

I have no doubt that they will adjust quickly, just as I did. They are certainly grateful for not having to endure another northeast Ohio winter. The crowded driveway, packed house and frayed nerves are only temporary inconveniences; having my family back together and here in this beautiful place is priceless.