To limit truck traffic or not? 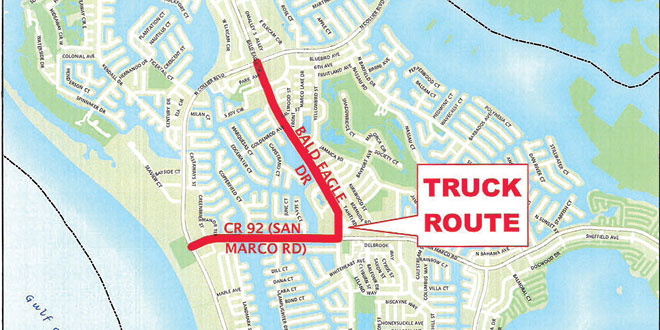 As Marco Island city staff solves the Smokehouse Bay Bridge quandary, city officials are considering various options to extend the life of the bridge and protect citizens. The city’s Planning Board recently discussed limiting truck traffic on the bridge and diverting it along two residential corridors — Bald Eagle Drive and San Marco Road.

Board member Dr. Bill Trotter developed the idea and suggested a Florida Department of Transportation representative provide information on the issue. While FDOT studies have not found Smokehouse Bay Bridge structurally obsolete, a third-party Condition Assessment and Recommendation Report by Cardno TBE found severe deterioration in the bridge decks — deterioration that “is likely to continue at an accelerated rate, since the bridges are now nearing the end of their design life.”

As such, Trotter contended preventive measures are in order to protect the health and safety of those using the bridge everyday. “We have complete freedom here,” explained Trotter at the meeting. “The point here is that the FDOT inspection is largely visual and not as detailed as the (Cardno TBE) one. The conclusion is severe deterioration on the road bed, and the more truck traffic that goes over the bridge, it is deteriorating the bridge. What is the harm in putting load limits on the bridge?”

Board member Irv Povlow agreed: “I think there is enough uncertainty about the condition of this bridge…We cannot afford to have any casualties or injuries there.”

This is not the first time city officials have pondered the question. Just ask City Councilor Larry Sacher. “When council began discussing Smokehouse Bridge for the umpteenth time, one of the questions I raised quite specifically was would there be an advantage to rerouting heavy 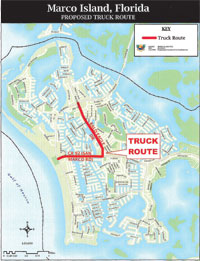 truck traffic from the bridge, would it extend the usable life of the bridge,” Sacher told the Planning Board. “(Public Works Director) Tim Pinter responded yes.”

Questions remain, though. Would there be an economic impact, and what would the practical impact on local businesses that use heavy trucks be? What would be the impact on the community? What would the criteria be for the limits? Weight? Number of wheels? How many trucks currently use the bridge everyday?

Public Works Director Pinter welcomed the discussion. As the FDOT studies assert the bridge’s condition remains within tolerable limits for truck traffic, Pinter and his staff have been unable to define the criteria for limiting the traffic. “This request is not based on engineering studies or evaluations. There is no criteria,” he insisted. “This is a choice for a reason, and if you ask for an engineering reason, there is no engineering reason.”

In the end, the Planning Board decided it needed more information before it could provide a recommendation on the issue to City Council, and it directed Pinter and staff to round up that information before the next meeting on Oct. 4. “I am not willing to burden council with a recommendation that does not have a background sufficient to make a reasoned judgment,” said Monte Lazarus, acting as chair of the board for the meeting. “We have the obligation to give them the most information possible.”

Trotter supported the measure, but emphasized the need for a decision. “We are trying to prevent a failure of the bridge while we are trying to do something to the bridge,” he noted. “There are a lot of considerations here.”