’Tis the Season for Murder, Mysteries and Mayhem 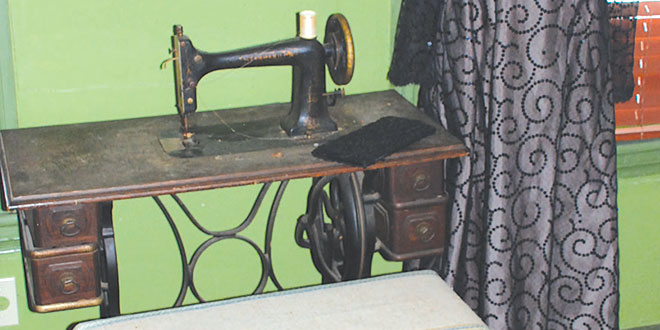 Just in time for Marco Island’s high season, Martha Horror (a.k.a. Gina Sisbarro) is launching the second season of her “Marco Murder & Mayhem” historical frightseeing tour — a “ghost tour” through the unsolved murders and mysteries of Marco’s last 150 years.

“This is a historical tour as well as a ghost tour,” explains Sisbarro. “History plays an important part of what shapes our world…Ghost stories are all over the island, but I focus one the ones that I can identify that helped to shape the island and its history.”

Still teamed with Bistro Soleil owners Denis and Lisa Mergue and Dolphin Trolley, Sisbarro will begin and end each 6-stop tour at the Old Marco Inn. Tours will start with a complimentary cocktail at Bistro Soleil. Visitors are encouraged to arrive between 6:00-6:45 PM, as everyone will be ushered aboard an old-fashioned trolley car at 6:45 PM. Tours leave promptly at 7 PM, and last between two and two-and-a-half hours.

Beginning Oct. 3, tours will be held on the first and third Friday of each month. Tour tickets cost $35 per person, and can 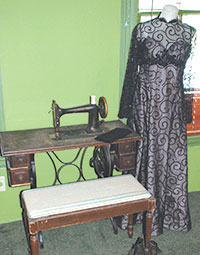 This room at the Old Marco Inn has been staged to look like the room of the woman who haunts the building.

be purchased online at www.marcomurderandmayhem.com.

Sisbarro is hoping her second season of tours will be as exciting and popular as the first, when every tour was full and private tours plentiful. She even held private tours during the summer when groups contacted her. “I am just so grateful and pleased with the reaction from last year,” she adds.

To be sure, the ghosts did not disappoint last season either. “We had a lot happen last season,” Sisbarro intimates. “I can’t guarantee an appearance. The spirits will seek out who they want for whatever reason, and you cannot come on the tour thinking they will be contacted immediately. The least suspecting are the ones who get the encounter. Certain ghosts drawn to certain ages.”

Of course, there are the orbs, shadows, mists and grainy images that some visitors caught on their cell phone cameras. Others claimed to feel a temperature change in the air — the presence of cold air — when a ghost passed them.

Still, Sisbarro recounts physical encounters as well, such as one time when a young man had his arm caressed when he left the cemetery. 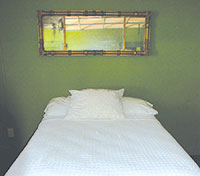 This bed provides a place for the ghost to lay her weary head.

Another young man felt someone blow on his neck, while still another suddenly was inundated with a scent of a floral soap. “It was clearly a fragrant scent,” she remembers. “The smell was with him as he walked along the landing (of Old Marco Inn).”

One woman even had her necklace removed from her neck. Sisbarro believes the necklace represented the time period the ghosts were from: “She felt the clasp move, and the necklace just fell off.”

“Many ghosts appear to have become more active since the tour began,” she adds.

There are new stories to tell as well this season. Sisbarro consulted a spiritualist, as well as two others who are able to communicate with ghosts. One new story focuses on a ghost that haunts a local restaurant. According to Sisbarro, the ghost was a little bit put when she first visited the restaurant. On the tour, visitors will find out why he stayed and why he is there. Here is a hint: It has to do with very happy people.

The room has been furnished with period pieces of furniture. SUBMITTED PHOTOS

her tours and research, identifying a second ghost in the Old Marco Inn and dispelling the rumors of the woman fleeing into the night. Marco’s most famous ghost was once an employee at the Inn, and Sisbarro believes her murderer also haunts the Inn. To help highlight this story, an old guest room on the second floor of the inn has been staged to look like the young woman’s room, complete with period dress and furniture.

This season, Sisbarro also will host a special Halloween Tour on Friday, Oct. 31. “We’re calling it midnight madness because it will go deeper into the night,” she notes. The evening will begin 8:30 PM with a complimentary themed cocktail and a three-course meal at Bistro Soleil. The tour will leave between 9:30-10:00 PM and will be back on the first floor of the Old Marco Inn by midnight in hopes of seeing some paranormal activity. Sisbarro asks that everyone dress in period costume from 1880-1930; there will be a costume contest.

“Let’s really bring out the ghosts,” she says. “I don’t advise flapper attire, though. I advise elegance. There were no flappers in Southwest Florida. Think Titanic.”