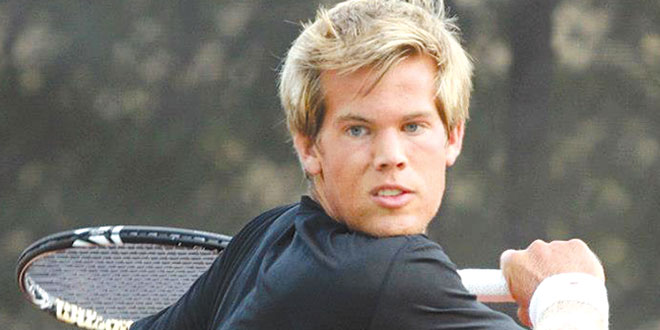 Ironically, when I grew up playing tennis on the Har-Tru (clay) courts at the Milwaukee Town Club (former home of the United States Clay Court Championships) back in the late 1960’s, we never had to contend with high-bouncing tennis balls. Sure, many of my peers had nice, well-groomed American Twist serves, but no one commanded vicious topspin groundstrokes that routinely bounced above one’s shoulders.

In my era, there was such a premium on the serve and volley strategy that points were relatively quick. Conversely, in the present game, foes constantly battle from the baseline and topspin strokes have never been more vibrant. Look no further than superstar tennis professional Rafa Nadal; it is alleged that he puts more revolutions (spins) on each stroke than anyone else in the history of the game. I’m not implying that he is the best ever, but when he hangs it up he will be in the discussion.

When I moved to Florida in 1981, I started to compete against an array of talented Europeans who often hit their groundstrokes with a variety of effective spins, and I was perplexed on what to do. Clearly, this new and different player forced me to make serious adjustments; when the elevated ball moved closer to my one-handed backhand, I had to raise my elbows to deal with the stroke. After a 90 minute battle against foes from Caracas or Bucharest, my chest and shoulders were literally exhausted.

I knew that if I wanted to win clay court events I had to alter my strategy and be prepared to sustain longer points and contend with high-spinning groundstrokes. Unfortunately, I did not have a sophisticated Playmate ball machine to practice with, so I had to be creative in order to cope with this new opponent: the groundstroke artist who commanded a huge inventory of spins and implemented a style which emphasized long drawn-out points. So, I employed one of my tennis pro friends who had the ability to feed the ball like no other.

Instead of hitting the ball with the traditional Continental feeding grip, which offers a flat ball, he made a radical change. With his new Semi-Western grip, he began to flick topspin balls one after another so I could deal with this different and incredibly challenging higher ball. He kept yelling, “raise your elbows!” Whether the ball visited my forehand or backhand side, I had to make the new adjustment or my challenger’s shots would have overwhelmed me.

Coincidentally, when I moved into the net to volley, I also had to have my elbows up or the ball would have dipped so quickly I would not have been able to hit a forceful ball. Remember, great baseliners have the ability to hit whipping, dipping balls, and if the net player does not meet the ball at its peak, well… say goodbye.

A great volleyer moves in quickly and tries to strike the ball when it is above the net, so

Browne once again raises the elbows for the high forehand drive.

he may put it away and not let the groundstroker recover. If the net rusher is timid, he must struggle with balls flying at his feet.

A few weeks ago at the Sony Ericsson in Miami, Novak Djokovic kept Nadal off-guard with commanding groundstrokes and outstanding net play. In particular, he attacked Nadal’s forehand (which Rafa did not expect) and snuck into the net hitting volleys at their peak and putting them away before Rafa knew what hit him! If, for example, Djokovic moved to the net a second or two late, Nadal would have reclaimed his balance and then would hit dipping balls that Novak could not scrape off the ground. Therefore, the only way to compete against a tough European baseliner is to hit every single ball on the rise or be prepared to run a mini marathon or more.

If the creative baseliner gets into the groove on his comfortable clay court surface, he will take command and control the tempo of the match. One of the many reasons American tennis players struggle at the French Open (coming soon) is due to their inability to cope with opponents who are in their element playing long points. Nadal dominates the French Open because he possesses so many qualities on the slow courts in Paris: blazing speed, unreal spinning groundstrokes and serves, shot selection and the patience or willingness to play for four or five consecutive hours. Realistically the only American male player who could beat Nadal is John Isner.

A few years ago, he had Rafa on the ropes in Paris and just could not close the deal and own the biggest win of his career. Even though the courts play slowly, John’s serve is so dominant that he can win quick points. Whereas, both Djokovic and Roger Federer must earn their service points with their commanding groundstrokes and be prepared to play at Nadal’s tempo. Additionally, Isner has more time to chase down balls on a clay court and has more opportunities to recover and then strike his huge forehand drive. However, John Isner has one major problem, and he has not been able to overcome it so far – he does not enjoy being away from the States for a prolonged period of time and has struggled thus far in his career.

If Americans desire to win more often in Europe, players must spend several weeks adjusting to the clay courts and be prepared to compete in the Italian Open or the Monte Carlo events. Finally, anyone who wishes to win on a slow clay court must practice hitting against the high spinning balls or suffer the consequences!