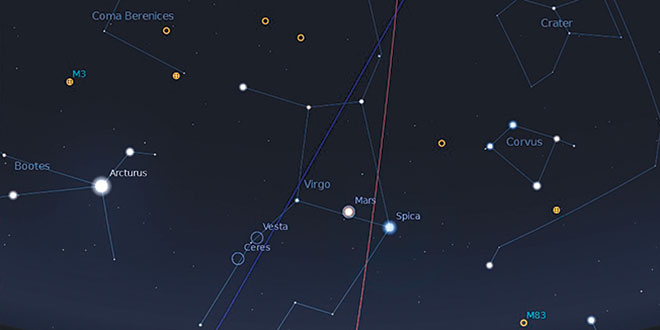 Mars is now the third brightest object in the evening sky. Only Jupiter and the star Sirius beat it out. Reddish Mars is located near the blue white star Spica, and together the two make an interesting color contrast; also nearby is the bright star Arcturus – an orange giant.

Mars is nearing opposition, which it will reach on April 8. When any outer planet is located 180 degrees from the Sun it is said to be at opposition (that is it’s opposite the Sun). The importance for stargazers is that the planet rises at the same time the Sun sets and is visible all night long. Also, opposition is the time the outer planet is nearest to Earth and appears largest and brightest.

In the case of Mars, not all oppositions are created equal; the planet has a rather elliptical orbit and some oppositions are simply better than others as the distance from Earth can vary quite a bit. This particular one is perhaps about average or a bit less. The closest oppositions come in intervals of 15 or 17 years and the best ones always occur in the summertime. You may remember the best opposition of recent times was in August of 2003 when Mars got a considerable amount of press. That particular opposition also spawned a hoax e-mail which annually appears every August promising that Mars will look as large as the Moon. This is flatly impossible.

On March 22 at Collier-Seminole State Park is a Star Gazing Party open to the general public. Several Everglades Astronomical Society club members and I will be there with telescopes and a park ranger from Big Cypress will give an interpretive presentation. I have heard his presentation before and he does put on a good show! Activities begin at 8 PM. Admission is $4 per car. In case of poor weather we will try again on March 23.