‘Til the Cows Come Home 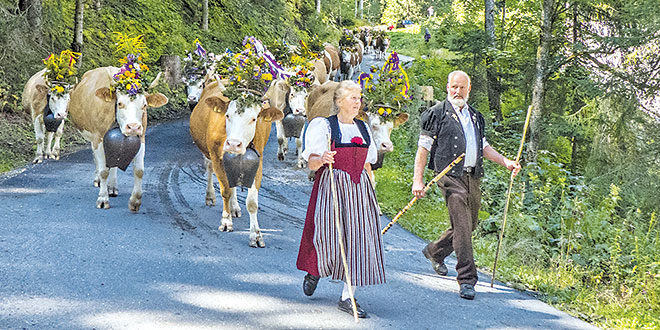 Local farmers lead their cows in a descent from their summer home.

Speaking of Travel
By Vickie Kelber

Although we have visited Switzerland a number of times, usually choosing to spend a month at a time, our travels have always taken place between early June and late August. On our last trip, we went a little later in the season, determined to stay until the cows came home.

Cows are an important part of Swiss culture and economy. Think Swiss cheese and chocolate. The cow has become a ubiquitous symbol of the country. After landing at Zurich Airport and getting on the internal transportation tram, we were greeted with a recording of cows mooing, cow bells ringing, alphorns, and jodeling. The bell rung on special occasions at the Swiss Stock Exchange is a cow bell. Even the reusable grocery bag that I purchased at a local supermarket was decorated with photos of cows.

The cow culture of Switzerland is unique and governed by laws, government subsidies, and strong tradition. There is something to be said for a country that pays a high price to preserve its traditions.

The Swiss Animal Protection Ordinance is very specific concerning suitable feeding, care, and housing based on current state of knowledge. Calves are given special attention; among the requirements are that calves over a certain age cannot be tethered or muzzled, must have sufficient lying area, must have straw, hay, or similar fodder and

sufficient iron in their diets and they must be housed with other calves or at least able to have contact with other cows.

Beyond the laws, though, it is typical for all of a farmer’s cows to have names and in some locations the barns are attached to his house. Insurance purchased to cover helicopter evacuation for a family is common in Switzerland and the policy also covers the family’s cows. This is more than just being humane, though. Switzerland is extremely conscious of its environment. The World Energy Council named it number one in the world in terms of energy efficiency, access to resources, and environmental sustainability. Farmers know a sick or dead cow could pollute the ground water system and recognize the importance of quickly removing a sick or injured cow for treatment or disposal.

As many as half to three quarters of a million cows spend their summers in remote high pastures where the mixture of grasses, wildflowers, and herbs are particularly good for making cheese. Cows that are primarily used for milking don’t make this annual trek to higher ground.

At heights of 5,000 to 7,000 feet, local valley farmers band together to hire a dairyman and herdsmen and women for their cherished cows. These workers must train and qualify for their positions. The main dairyman has to serve at least one season as a helper before assuming lead position. The hours

are long and pay low for the herdsmen, but somehow this way of life continues to be attractive to men and women from all walks of life. The dairyman shares his hut, called an alp, with the cows. Often the alp does not have power, running water, or refrigeration.

To help keep track of the cows, they are belled. There is nothing more mellifluous than the symphony of those bells as a chair lift or other aerial conveyance whisks us up a mountain over a herd of grazing cattle.

While the cows are on high, the farmers remain in the valleys, mowing the vegetation, haying, and stockpiling it for the winter. The cows remain in the alpine pastures for approximately 100 days, returning to lower ground by September 30th in a ritualistic, traditional manner. It was this ritual that drew us back to Switzerland this time of year.

Known by different names, alpfahrt, alpabfahrt, alpabzug, alpzug or désalpe in the French part of Switzerland, the “cow parade” is a time for the local farmers and townspeople to rejoice in the summer’s bounty of cheese and the return of their beloved cows to lower ground. The farmers wear traditional clothing while the cows are adorned with huge ceremonial bells, flowers, flags, ribbons, pom poms, even small trees. Typically, the procession is by families, with the largest number of cows at the end. In the Appenzell area of

In many towns, the alpzug is a cause for a festival with lots of food (cheese based, of course) and drink and a market with local products and arts and crafts along with traditional music of alphorns, jodeling, and accordians. Swiss jodeling is not the hokey, high pitched noise sometimes passed off as yodeling by country music stations in the US. Rather it has evolved from a Middle Ages way to communicate between mountain villages into a melodious type of a capella singing.

In other places, the descent takes place without much surrounding fanfare, but, of course, with the traditional costumes, bells, and decorations. If an alpzug happens to pass by a school while it is in session, lessons stop and all the children come outside to cheer the cows.

Our month in Switzerland allowed us to attend a number of alpzugs; some planned, some serendipitous. Perhaps the nicest was in the town of St. Stephan, population 1300. Almost 400 cows descended down to the festival grounds and back to their farms. They came not all at once, but rather by farms, decorated in time honored fashion.

The most memorable, however, was totally unexpected. We were on an alpine bus, taking us up 4500 feet to a remote area from where we were going to hike. As we ascended the steep, narrow, hairpin turn road, a man in traditional costume approached 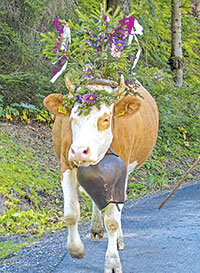 Typical decoration for a cow coming home for the winter.

the bus and flagged it down. The driver pulled over to the side in order to let a large group of festooned cows pass us in their descent. This happened three more times as we climbed to our destination. There was no accompanying festival for these cows; they were merely returning home. With all that is going on in the world, it was almost surreal, yet comforting, to witness this peaceful tradition that has been going on for generations.

While the alpfahrt is a time honored, deeply ingrained tradition, some of it may be in for a change. A recent study as part of a doctoral dissertation at the Swiss Federal Institute of Technology revealed that those very large bells weighing more than 12 pounds can create noise levels up to 133 DBs and may damage the hearing and feeding habits of cows. These large bells, though, are merely for ceremonial purposes, worn perhaps only 2 days a year; time will tell whether concern for the cows will change tradition.