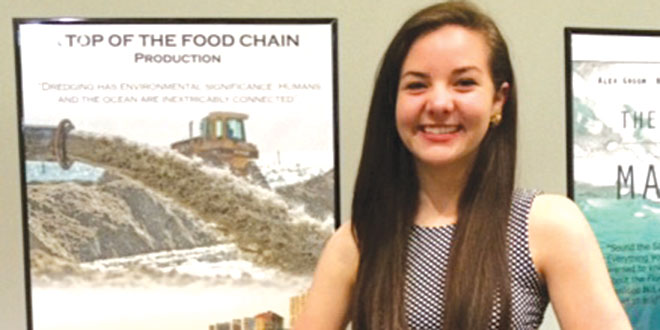 The glitz and glam were toned down, and there were no red carpet fashions or paparazzi. Still, the Second Annual Lely High School Marine Science Student Film Premiere was a big night Marco Island. The film “Marco Dredge and Fill” — the story of the creation of Marco Island — took top honors, rising above a field of 30.

City of Marco Island Environmental Specialist Nancy Richie was in the film, playing an expert and scientist. “It was a great experience to mesh history of the island, the science behind dredging and filling (pros and cons of these activities for wildlife, habiatat and the community) and the art of creating the short film. The students were all very creative. It was like watching a research paper. There’s no doubt some of the students will pursue a science and/or art career,” she explained.

Focusing on the local environment, the film projects and premiere were truly team efforts. The program was coordinated by Mark McGarity, LHS Marine Science teacher, in partnership with Discovery Education, a leading provider of digital content for the classroom and a division of Discovery Communications, whose networks include Discovery Channel, Animal Planet and Science Channel. Since 2002, Collier County Public Schools and Discovery Education have partnered to bring digital resources to classrooms to empower teachers, enhance curriculum and inspire students.

Each six-minute film began with picking a topic, researching that topic, creating a script and interviewing local and national 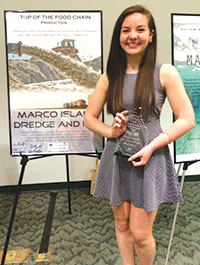 professionals and experts. McGarity and his students worked with the Discovery Channel associate producers on the mechanics of making a film and incorporating science education into those films, including Kristen Wilcox who is on the “Shark Week” team. Students and producers met throughout the project via Skype. The LHS media students created the posters to showcase the films.

Continuing its 25-year commitment to Marine Science Education, the Florida Department of Environmental Protection’s Rookery Bay National Estuarine Research Reserve hosted the film premiere on April 30. The Friends of Rookery Bay, a not-for-profit Florida corporation, donated cameras and other equipment needed for the projects, and Reserve scientists and educators served as experts for the 30 student teams. The Reserve also served as backdrop for many of the films.

“The Florida Coastal Office encourages our field sites — like Rookery Bay — to reach out to local high school and college students,” said Kevin Claridge, director of the DEP’s Florida Coastal Office. “This program excites students about science through a medium that includes a screen, which is second nature to our next generations.”

Gary Lytton, environmental administrator for Rookery Bay, agreed: “This is a great opportunity to merge science and digital storytelling in a way that engages students in our work.”

During the film premiere, awards were presented to the top five films — “Marco Island Dredge

Team Top of the Food Chain won 1st prize for its film “Marco Dredge and Fill.” Students (from left) Brooke Bragenzer, Holly Heidenreich, Ciera Parcelles andRobert Thompson worked together on the film which is about the creation of Marco Island.

Richie applauds the students and educators behind the program, as she sees it as a way to help people better understand the world in which they live and better communicate the critical issues facing the natural world and the solutions to those problems.

“Reading a text book or watching a documentary about environmental issues, about somewhere else on the planet is important and necessary, but getting the kids out in their backyard environment, seeing firsthand the local issues, how they affect their community, their recreation, and the people of the community, talking to local people that are implementing projects they have read about in a book or heard on the news, makes the students realize they too can be hands on, part of the solution and able to talk about a subject seriously,” said Richie. “I think the teenagers who were involved put themselves out there in the real world and saw that they could actually be a scientist or a film maker. This project gave them the knowledge and confidence that will help them as they travel their path to a job or college.”