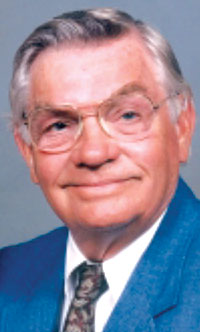 Tom was born in Marion, Illinois on September 28, 1928, to Harmon E. and Ola P. Garrison. He had two brothers, Herbert and Norbert, and a sister, Jo Ann Wall Trosper, all of whom preceded him in death.

Tom served in the Navy for two years and graduated from the University of Illinois. He was a member of ATO fraternity and is a past president of his Chapter at Urbana. He met his wife, Mary Alice, while at the University and married in 1951.

Tom and Mary Alice moved to Indianapolis from Danville, Illinois, in August 1963 when he became the General Agent of Massachusetts Mutual for the State of Indiana. He built a nationally-recognized Mass Mutual agency in his 35-year insurance career. His business success allowed an early retirement at age 60.

He and Mary Alice split their retirement years between their homes in Marco Island and Indianapolis. They traveled extensively during their golden years. She preceded him in death on August 30, 2008. Tom enjoyed his retirement years playing golf, reading, and singing in the church choir on Marco Island.