Theater Camp: ‘Into The Woods’ 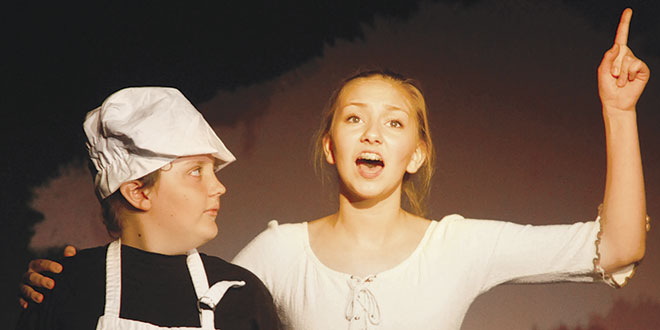 Ryan Sullivan and Jessica Lang played the Baker and his Wife.

In its summer camp grand finale, the city of Marco Island’s annual theater camp pondered the consequences of wishes and dreams in its production of Stephen Sondheim’s “Into The Woods.” Directed by Booey Blassneck, campers performed the musical for the city’s Camp Mackle and during two Aug. 9 performances at Marco Players Theater.

Premiering on Broadway in 1987, “Into The Woods” is the story of a baker and his wife and their fondest dream to have a child. Seems simple enough, right? Wrong! Their story is woven among the plots of several Brothers Grimm fairy tales — Little Red Riding Hood, Jack and the Beanstalk, Rapunzel and Cinderella — and is fraught with gallant princes, conniving witches, angry giants, enchanted animals and lots

Cinderella (Abby Martin) and her Prince (Jonny Hurtley) are blissful in granted wishes.

of magic. The moral of the story for every character is to be careful what you wish for because even when you get it there is always another something to wish for.