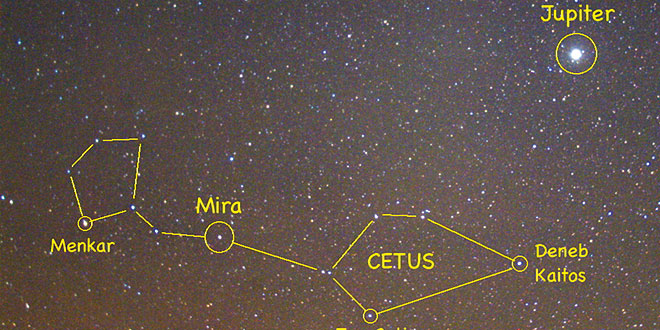 In the southeast tonight lies the constellation Cetus, the whale, as it is usually called, although it is really more of a sea monster in mythology. It’s in that area of the sky called the sea, which is a large group of constellations that have a watery theme. It’s not the brightest of constellations. In fact, it is rather dim, and it will take you a moment to locate it in the sky. Look first for Fomalhaut, the brightest star in that whole region of the sky — almost due south of you. Now, turn your eyes towards the left to find Diphda, a dimmer star than Fomalhaut but still brighter than anything else around it. Diphda is the base of the tail of Cetus; from there, you can pick out the rest of the constellation.

One of the more interesting things about Cetus is what you don’t see. Near the “C” in Cetus on the chart two constellation lines come together where there should be a star, but there is no star to be seen with the naked eye. In fact, you might be hard pressed to find one with your binoculars. A star is present, but it is a very special one, a variable star that changes its brightness on a fairly regular basis.

Mira the Wonderful, as the star is called, can be as dim as magnitude 10.9 and become as bright as magnitude 2 every 332 days. In other words, it can be as much as 1,700-times brighter at its maximum than its minimum! Usually, however, it avoids those extremes and tends to move between 3.5 and 8.6. To put it another way, Mira can be as bright as Diphda, but usually maxes out as bright as Tau Ceti. The next time Mira is scheduled to reach maximum brightness is in May 2015.

Speaking of Tau Ceti, marked as “T Cet” on the chart, it is one of the closest stars to the Sun at 12 light years. It is thought to have five planets, at least one of which is in the habitable zone. As Tau Ceti is only about half as bright as the Sun, this habitable planet would be about as close to it’s star as Venus is to ours.

Take out your binoculars, and see if you can find the Sculptor Galaxy. It is one of the brighter galaxies in the sky, but it can be rather hard to find as it is not located near any convenient finder stars. Look for a cigar-shaped misty spot nearly as long as the Full Moon is wide.

Mr. Usher is a Director of the Everglades Astronomical Society which meets the second Tuesday of the month at 7:00PM in the Norris Center, Cambier Park, Naples. E-mail: usher34105@earthlink.net