‘The Wall That Heals’ Returns Feb. 12 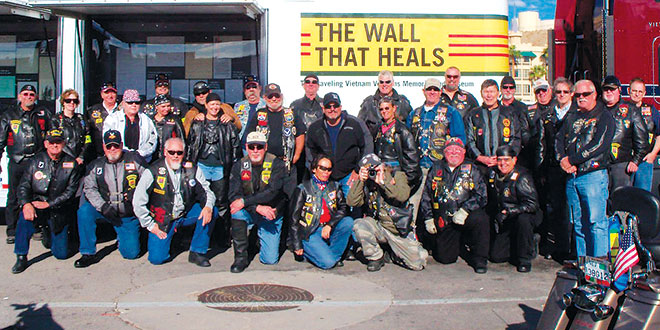 The sacrifices of the Vietnam War are never too far from the minds of those who fought and those who awaited their loved one’s return.

It’s a memory accompanied by heart rending pain when it comes to the members of America’s military who paid the ultimate sacrifice during the conflict.

Known as “The Wall That Heals,” the traveling memorial returns to Marco Island’s Veterans Community Park, Feb. 12-16. Marco is the smallest community on the 15-city, 2015 tour schedule. More than 15,000 people paid their respects at the Traveling Wall during its initial visit in 2011.

“I think it’s very unique (the Traveling Wall) because it gives people who can’t travel to Washington, DC, an opportunity to see the impact of the 56,000 people that we lost in the Vietnam Conflict,” said Marco realtor Bill Filbin, who served in the US Navy during the war. “It sort of brings home what happened over there.”

The 24-hour exhibit opens at 7 AM, Thursday, Feb. 12, with an opening ceremony set for 3 PM that day, which will include the dedication of the Freedom Fountain, centerpiece of the park’s Veterans Memorial.

Like the original Vietnam Memorial, the 250-foot long Traveling Wall is erected in a chevron-shape and contains the names of all the American service men and woman who lost their lives.

The exterior sides of the trailer that transports the exhibit open into a mobile education center that tells the story of the War, the Wall and the Vietnam era. A computerized information center allows visitors to search for data about the service members whose names are on the Memorial.

Over the course of the five-day exhibit, volunteers will read the names of the 1,954 Floridians killed in Vietnam.

Filbin was one of the readers during the Traveling Wall’s 2011 visit and will perform the same duties twice next week. He served in Vietnam from 1969 through 1970 and then worked for three years as a civilian for the U.S. Embassy in Saigon.

“To me, those are sacred names, whether you knew them or not,” said Filbin. “I feel it’s an honor and a privilege to read those names and keep them alive in people’s memories.”

Jane Kiester of Marco was also a reader in 2011. Her brother, Christopher James Bell was in Vietnam for only six weeks when he died in 1969, at 21, after the pin fell from a grenade on his belt and he dove on it to save his comrades.

“Both my parents’ hair turned absolutely white,” she said. “They never got over it. Neither did I. I miss him still, so to me it’s really important that I participate in the (Traveling) Vietnam Wall. How could I not volunteer for the (Traveling) Vietnam Wall? The most important thing about this wall is these young men who never had a chance to live. They never had a chance to taste the flavor of life. The Wall is a way to remember them so they don’t pass away to obscurity.”

Doug Hartman, a graduate of the United States Military Academy at West Point, spent about 26 months in Vietnam during the mid-1960s, most of it in combat. After returning stateside, he taught economics for three years at his alma mater before becoming a business executive.

While working in Washington, DC, he became part of the organization responsible for making the Vietnam Veterans Memorial a reality and helped raise money for the monument from private industry.

“So it was natural that when I came down here and heard they wanted to get the wall here, I got involved,” said Hartman.

Hartman, who was the keynote speaker for the 2011 visit, is again a member of Marco’s The Wall That Heals Committee, which is organizing the visit, under the sponsorship of American Legion Post 404 on Marco.

“We have a pretty well-oiled team because they’ve all done it before,” he said. “I feel very good about the whole thing. The Vietnam War veterans are kind of like WW II veterans. We’re thinning out a little. It’s (Vietnam) still a very relevant issue and it’s something that the kids in school don’t know a lot about.”