The Virgo Supercluster of Galaxies 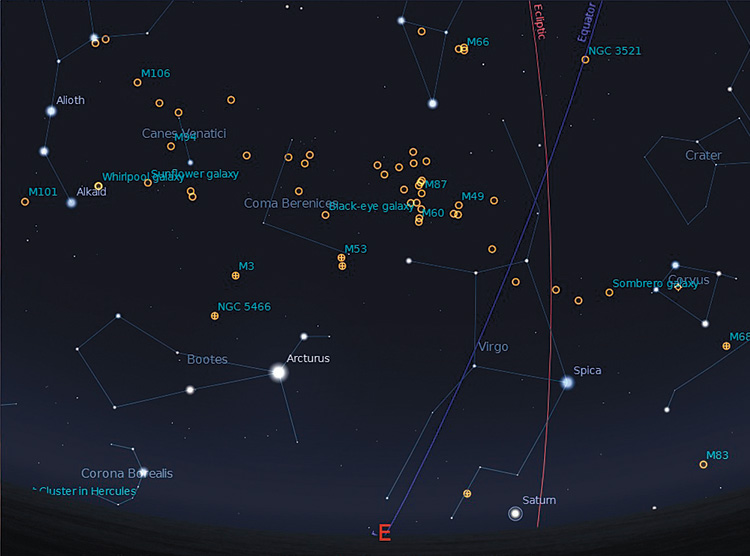 In the gap between Virgo and Leo lies one of the showpieces of the sky and all it takes is a pair of binoculars to glimpse it. In this area, mostly devoid of naked eye stars, lie a countless number of galaxies of which about a dozen are visible in 9×50 binoculars. In a dark spot rest your elbows on a sturdy object like a car roof and scan this area of the sky carefully. In the accompanying chart each galaxy is represented by a tiny circle; ones bright enough for binoculars have either names or Messier numbers. The galaxies will appear as tiny wisps of fog – as well they might, being some 45 million light years away!

The Virgo supercluster, of which our galaxy is a distant member, is just one of millions of superclusters throughout the universe. As superclusters go, it is one of the least impressive ones but is highly visible to us for two reasons: 1) it is relatively close and 2) it is situated well away from the disk of the Milky Way where dust hides almost everything truly distant – at least in visible light.

For naked eye observers, we have Boötes (both o’s are pronounced) rising in the east dominated by the bright star Arcturus. It is the 4th brightest star in the sky and the brightest in the northern hemisphere, although it is so close to the celestial equator it is easily visible everywhere in the world except Antarctica. In the unlikely event you have trouble finding Arcturus, mentally extend the curve of the handle of the Big Dipper and Arcturus is the first bright star you come across. Arcturus is a very old star, about as massive as our Sun, but 170 times brighter and has a distinct orange tint. In fact, our Sun will look very much like Arcturus in 5 billion years or so.

Continue the arc of the Big Dipper’s handle beyond Arcturus and Spica is the next bright star encountered. Spica is one of the few 1st magnitude stars found near the ecliptic and is occasionally occulted by the Moon and very rarely by planets, perhaps once every few centuries. Spica is one of the closer stars to Earth expected to end it’s life as a supernova – but don’t expect that to happen for many millions of years yet!