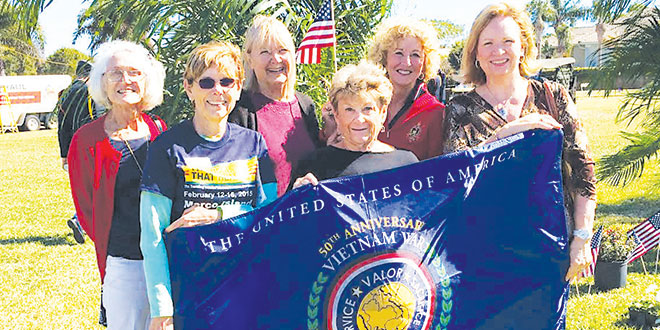 Among the hundreds of Marco Islanders who were part of the effort surrounding the return of the Vietnam War memorial replica were members of the Marco Chapter of the Daughters of the American Revolution.

The women volunteered to help while the Wall That Heals, the traveling replica of the Vietnam Wall in Washington DC, was on Marco February 12 through 16. The women worked at the Wall’s welcome center, participated in reading aloud the names on the Wall and helped people find names using the computer index and searching on the Wall itself.

“With the return of the Wall to Marco Island, our chapter was able to participate in one of the foundations of DAR – patriotism. We could sense the unashamed patriotism and love of our counter from the Wall’s visitors.”

She recalls one visitor who said, “The Vietnam War was so different from WW II – where we fought, won, and returned home to a thankful nation. Now we are 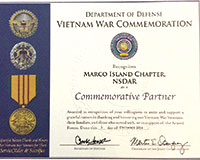 Signed by outgoing US Defense Secretary, Chuck Hagel and Chairman of the Joint Chiefs of Staff, General Martin Dempsey,this certificate honors the Marco Island Chapter of the Daughters of the American Revolution for its ongoing support of America’s Vietnam veterans and their families.

able to recognize the sacrifice that so many made – 50 years in the making – with the traveling Wall.”

Marco’s DAR has been recognized as a Commemorative Partner by the Department of Defense Vietnam War Commemoration Committee because of the chapter’s ongoing efforts on behalf of Vietnam veterans.

The commemoration honors those who actively thank all Vietnam veterans and their families, those individuals, agencies, organizations and allies that supported the war and highlights contributions of that war effort in the fields of technology and medicine.

Karen Lombardi says the members will display proudly the certificate and the banner “to commemorate the Vietnam experience, to honor the fallen with the dignity they deserve and to publicly thank the returned Vietnam veteran.”

The Marco Island Chapter of the Daughters of the American Revolution holds its monthly luncheon meetings at 10:30 AM on the third Thursday of each month. The chapter welcomes members from other chapters who are living in or visiting the area and potential members. For further information, please call Karen Lombardi at 239-394-0028