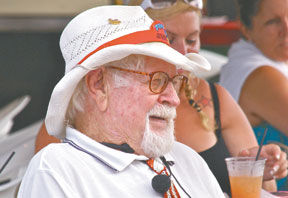 A true philanthropist, Stan Gober will be remembered for his generous spirit. PHOTOS BY VICTORIA WRIGHT/COASTAL BREEZE NEWS

People often say, “you are judged by the company you keep.” If that is correct, than the oddity of the “Do-Goodlanders” begins to make a lot more sense.

Not many people in Goodland can remember a time prior to the Stan’s on Sundays mania. After all, Stan Gober has been a fixture in Goodland since he first moved here in 1969. He bought Stan’s Idle Hour in 1970 and had the first Mullet Festival in 1985. Ever since then, we have been “Buzzard Loping,” handing in our “Yankee Dollars,” dancing to live music, listening to Stan’s jokes and guzzling those oh-so-delicious Buzzard Punches. Any time you tell someone that you live in Goodland, their immediate response is, “Oh! I’ve been to Stan’s!”

From humble roots in Alabama, to hard work in Miami with the telephone company, Stan built himself up to become a legend in his own time.

Having a true sense of what God had provided for him, Stan was able to utilize the popular weekly event he created for the greater good.

Growing up during the Great Depression, he always knew it was important to give back. And so he did; and in a big way.

In the past few years, every Sunday seemed to bring a different fundraiser. People gladly gave their “Yankee Dollars” to any of myriad charities Stan supported.

As Goodland has changed over the years, Stan’s generosity and huge heart has always remained a constant. He taught us to be generous and to share what we could. He was the Grandfather of this era of Goodland. Stan is the man behind the “Do-Goodlanders.” He will always be remembered and celebrated for all the good he did while in Goodland.