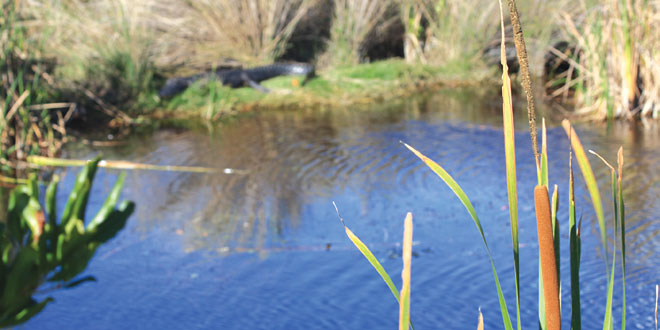 Marco Island. Paradise. It’s a destination for many, a seasonal home for thousands and a year-round community and permanent home for many more – both humans and wildlife.

Separated from mainland peninsular Florida by the Marco River with the Rookery Bay estuary and the 10,000 Islands ecosystem complex cradling it on the edge of the southwestern Gulf of Mexico, the approximately four by four square mile island is one-of-a-kind. Once 6,000 acres of mangroves, it is now over one hundred miles of manmade canals with that gorgeous 7-mile crescent beach, both recreational for tourists and natural habitat for wildlife, that maintains the tropical atmosphere. The “finger” canals are sea-walled and rip-rapped, with docks about every hundred and fifty feet. It’s a boater’s dream and one of Florida’s largest population of manatees’ precarious safe haven. Through our lanai screens and breakfast room picture windows we watch mullet spawn, school and leap at regular intervals. We see sting rays congregate, mate and glide and enjoy the daily Bottle-nosed dolphin patrol, rounding up mullet for meals. Snook lights on the docks attract, well, snook, but also grouper, snapper and sheepshead for easy fishing. Starfish, oysters and barnacles attached to the cement seawalls recreate a natural marine environment. Riprap improves habitat for crabs and other intertidal species. But is that enough?

These manmade canals are an ecosystem balanced delicately, holding its own against impact from storm water runoff, development, landscaped yard waste disposed carelessly, pesticides and herbicides leaching and soil erosion. Improvements to outfalls, removing septic systems and education about fertilizers and Florida Friendly Landscaping principals may be keeping the tipping point of disaster at bay, for now. But everyone needs to take note and participate if this paradise can sustain. As south Collier County, specifically the County Road 951 and east State Road 41 corridors develop in the next decade, and Marco Island builds-out, thousands of new residences will be added along the edge of the Rookery Bay estuary that buffers and protects Marco Island. This fragile balance has to be addressed now and continually if we are to keep the ecosystem healthy.

Why aren’t we paying more attention to our backyards, the canals? Grass is treated royally – mowed, fertilized and tended weekly. Can you count the number of lawn care companies on the streets of our small island? Many but not all, fortunately, of the contractors and sea wall builders pay little attention to soil erosion on their project sites.

At the Conservancy’s Dalton Discovery Center visitors can see how their trash hurts our waters. Photos by Natalie Strom

Construction silt fencing is not installed properly and turbidity booms in the canals are not maintained during projects. Easy practices are common knowledge for those with professional ethics. These “best management practices” prevent soils, sawdust shavings, waste from entering and polluting the canals and ultimately the Gulf of Mexico. Each episode of discharge of waste into our canals accumulates and, little by little, it impacts the balance until the tipping point is reached. Commonly, debris is blown into the canal, allowing the tide to “dispose” of the evidence of waste from a construction site. With new products containing plastics and synthetics, this unprofessional management further impacts our ecosystem. Is this best management practices? Yet, our backyard canals that are less than fifty feet from our back doors and the gateway to the Gulf of Mexico are not given that much thought or care by many of the contractors and their employees. Will they, before it is too late? Other Floridians know that it is too late.

We currently read about muddy waters off Sanibel Island chasing tourists away and causing low fishing takes and slimy green algae blooms in Cape Coral just forty or fifty miles north of Marco Island. That area has the unfortunate proximity to the mouth of the Caloosahatchee River. Due to high rainfall amounts, the emptying out of the bulging Lake Okeechobee by the Corps of Engineers is causing havoc to that estuary and those near shore waters.

Just across the state, Indian River Lagoon has collapsed. They are experiencing historic numbers of dead dolphin, manatee, birds and fish. A toxic algae bloom persists. The experts and scientists studying this demise point to the collision of many factors: development removing natural storm water retention and cleansing systems such as wetlands and hydric forests that are replaced with non-pervious surfaces, growth in population upstream with hundreds of thousands of septic systems permitted, leaching nitrogen and wastes into the groundwater and estuary, many years of drought, compounded by the recent high rainfall amounts have overloaded the system. Releasing the waters from Lake Okeechobee downstream on that coast has caused sediments full of nutrients, particularly nitrogen, to stir up causing a toxic soup for sea grasses and the entire food web. In the name of developers and flood control, water quality and environmental collapse is sacrificed. The very reason many people chose to move to Florida is the natural environment and clear water which is now facing such grave distress.

this happen here? Yes. We are fortunate not to be in the vicinity of the direct mouth of a river, but the diversion of canals in the Everglades restoration projects and mainland development will impact the now balanced water quality in and around Marco Island. Many of us have lived here over two decades…or more. We have seen water go from clear, filled with a diversity of fish species, to cloudy with less fish and algal blooms more frequent. In the past year, we just survived over six months of low to high levels of red tide algae blooms that cause discolored waters, complaints of respiratory irritation and dead fish in the canals and washed up on the beaches. This rainy summer, many canals were covered in mat algae, a macro algae species that grows on the canal bottoms, and in rain events and storms, peels up and floats on the surface decomposing. It is not toxic, but it does impact bottom dwelling marine life, causes fish kills, unpleasant odors when decomposing and unwanted aesthetics on the canals. With more water with unknown contaminants headed our way from upstream, the estuary and waters of Marco Island need to be considered a priority and monitored carefully and consistently.

Marco Island is paradise. When it comes to natural beauty and wildlife, let’s not be the place one says, “Remember when…” The tipping point is now and it is time to pay attention. Do your part and demand best management practices from your contractors to ensure protection of one of our most valuable resources, our canal backyards, which should be treated with great care. Make sure yard debris, soils and waste from a project do not go into the island’s canals. It is a community effort to ensure no one is polluting our waterways! Ask your lawn care company if they have taken the Florida Green Industries Best Management Practices certification classes. Many lawn care companies have taken the course and registered with the City and do practice ethics and professionalism – please hire them! For information on Best Management Practices (BMPs) for surface waters protection, landscape and other environmental information or to inquire about or report illegal discharge or site management practices on Marco Island, please contact Nancy Richie, City of Marco Island, Environmental Specialist, at 239-389-5003 or nrichie@cityofmarcoisland.com.

For more information on local locations to see wildlife, or interest in volunteering, please contact Nancy Richie, Environmental Specialist, City of Marco Island, at 239-389-5003 or nrichie@cityofmarcoisland.com