The Tiger In The Sky 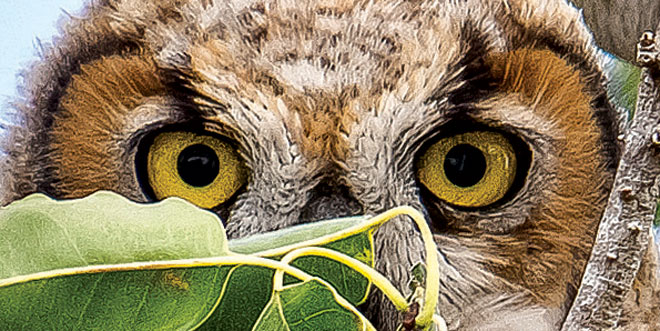 The Marco Island Burrowing Owl population is very popular this season. So popular, in fact, that many burrow sites on the main thorough fares are being invaded by visitors for drive-by photos and amateur tours. Some sites have people approaching all day long by car, bike, foot – even crawling under the flagging tape with cameras – time will tell if this owl population will tolerate and sustain this impact. Just a friendly reminder – please approach all wildlife sites quietly, if in a group, stay together, don’t surround the posted area or wildlife that is being viewed, and give the wildlife some space – a photo of a frightened bird or animal, is not a great photo and an owl or bird flying away, running in its burrow, hissing and acting agitated, is considered harassment and may cause the animal to abandon the site.

There are actually a few other species of owls on the island, more secretive and camouflaged. One is considered the “tiger in the sky” due to its predatory voraciousness. The Great Horned Owl (Bubo virginianus) is also nicknamed the “hoot owl” or “cat owl” in some regions due to its hunting technique, distinct vocals and prowess. It has been a resident of Marco Island – and our nation – longer than most.

Its range is common throughout North America and into South America. It was first seen and described in the Virginia colonies in 1788 by German naturalist Johann Fredrich Gmelin. Very distinctive due to its large size, the Great Horned Owl can be almost two and a half feet in height weighing over five pounds.

It can be found throughout Florida, but not in the Keys or through the Caribbean. Typically, its feathers are brown but can have changing characteristics depending on its range; darker in the northern ranges to almost white in the tundra. Here in Florida, it is typically mostly brown, barred with white, brown and gray feathers in color, with a burnt orange to tawny face disc. It has rather distinct ear tufts – “plumicorns” – not horns or ears, just feathers that stand up. The ears are not symmetrical, but at different elevations on their head, so hearing is augmented at a head slant or turn, and also used as funnels, giving them a better depth perception and hearing range than humans.

Large, with a barrel-like body, its wing span can be over four feet in width with intricate feather layers to ensure silence in flight. They have bright yellow eyes – eyes locked into place with binocular vision, so its head can swivel 270 degrees to look around, thanks to 14 vertebras in it’s neck – twice as many as humans. The females are slightly larger than the males, but the males have the deeper voice that calls a “hoot hoot hoo hoo hoo,” a three to six score cadence that can be heard for over a couple of miles. This species is simply unique and gorgeous.

Great Horned Owls have no known predators except potentially the Snowy Owl in the north ranges, and interestingly, they do not build their own nests. This owl will not hesitate to use abandoned nests of herons, osprey and Bald Eagles and will 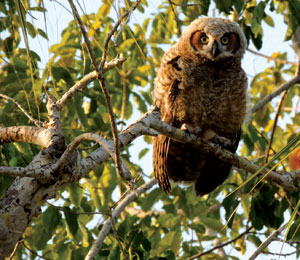 aggressively take over their nests; just as a pair did this year on the Island Golf Country Club property to a long-time Bald Eagle pair. Reports of this take-over were that the long-time resident Bald Eagle pair was chased away from their nest in the nesting season but then the Great Horned Owls never nested themselves. The eagles did not return to nest either. This attack was possibly a territorial dispute between two magnificent birds of prey at the top of the food web. This same scenario also happened the first year the young Bald Eagle pair settled at the Marco Island Eagle Sanctuary site. The owls never did nest themselves at the Eagle Sanctuary site and the Bald Eagle pair did come back and defend their nest site. They have since nested successfully for several successive years. Hopefully, this will happen on the golf course as well, and the owls can find a different nesting site they can settle into.

The eco-drama regarding Great Horned Owl nesting patterns has played out on Marco Island for years. The owls have produced young at several different locations here: Fieldstone Court, within Hideaway Beach, South Heathwood Drive and on the fringes of Barfield Bay.

The owls look for tall, dense trees and apparently abandoned nests. This year, there has not been a documented active nest on Marco Island, but there are nesting pairs with two owlets each nearby in GooEarly nesters, the Great Horned Owls, court and mate in early December and will have young by late January or early February – in the dead of winter. Both the male and female will incubate the one to five eggs, commonly hatching just two chicks. The chicks fledge (can fly) in six to eight weeks, but can will stay months, sometimes through October, in Florida, with their parents.

Here’s a tip: never get too close to a nest of Great Horned Owls – both adults will not hesitate to protect (i.e. this means “attack”) anything or anyone that gets too close to their nest or young. Get your long lenses out, photographers!

Being birds of prey – and nocturnal – they will perch on tall trees, structures or snags (dead standing trees) as the sun is setting and into the dusky night to watch and wait for prey. Prey is virtually anything – amphibian, fish, reptile, bird and mammal. They are the only animal that will eat a skunk! They swoop down silently, due to their fringed and intricate feathers, and are very efficient in picking up the target prey with their large feathered talons. By the way, the talons have the crushing power of up to 300 pounds per square inch! They eat their prey whole, then produce a pellet of fur and bones. Known to be a hunter of crows and their young, crows will travel for miles to congregate in large groups or “mobs” to harass the owls.

International Earth Day is April 22nd this year. Please remember, with all the bounty of wildlife on our beautiful island, Earth Day is every day on Marco Island. Give our wildlife respect and space so the populations are sustainable and so that we and future generations can continue to enjoy them.