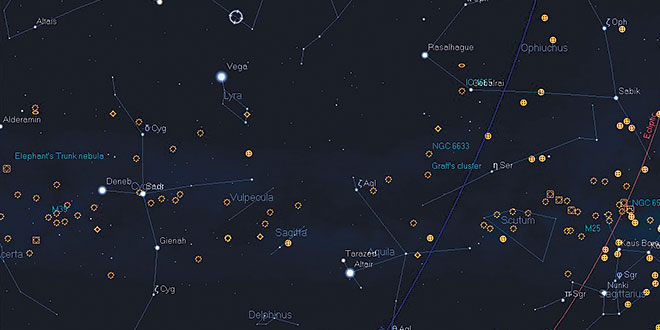 We talk about the Summer Triangle consisting of Vega, Altair and Deneb from time to time and once again it is high in the east. This asterism is a relatively recent invention popularized by Sir Patrick Moore about 60 years ago.

The three stars of the Summer Triangle are buried deep in the Milky Way, and their constellations are rich in Deep Sky objects. But before looking for any of them, examine the shape of the Milky Way itself. If you are at a dark sky site, you can’t help but notice the Milky Way is not a continuous stream, but is in fact rather irregular in shape. In particular, between Cygnus and Aquila there is a dark streak largely devoid of stars. This is the Great Rift — not really a starless region but a vast dust cloud that blocks the starlight behind it.

Rather than hunt for a particular Deep Sky object with your binoculars, lay down on a lawn chair with them and sweep the sky along the length of the Milky Way. There is nothing like the thrill of discovery! Most of the Deep Sky objects seen in this area of the sky are known as open or galactic clusters. These are groups of stars of perhaps a dozen to several hundred that were born at nearly the same time and are still associated with each other. Our Sun was born in such a cluster long ago, now dispersed. Open clusters are short-lived objects perhaps lasting no more than 100 million years before gravitational forces from the rest of the galaxy pry them apart. Somewhere in the sky tonight are the long lost siblings of the Sun.

Such a sibling has just been found! It’s marked in the chart tonight by a large circle just above Vega. It’s only a 6.5 magnitude star, just below naked eye visibility, but easy to spot with binoculars. The star (called HIP 87382 by one popular catalog) is slightly larger than our Sun and has no known planets — but their possible existence has not been ruled out. The things that identify the star as related to us are that it has exactly the same chemical composition as our parent star and is the same age. At 110 light years the star is amazingly close. Members of our birth cluster have had time to be scattered across half the galaxy.

Mr. Usher is a Director of the Everglades Astronomical Society, which meets the second Tuesday each month at 7 PM in the Norris Center, Cambier Park, Naples