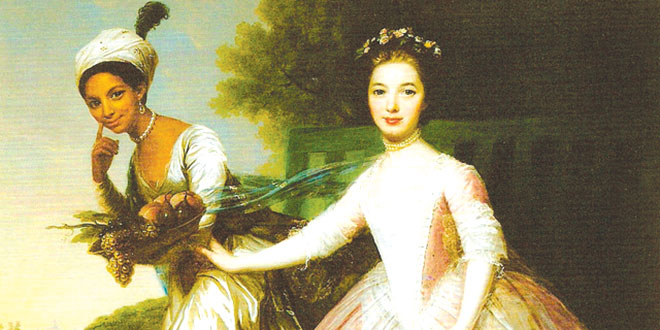 I haven’t seen the movie “Belle,” but I can tell you it is a testament to the power of art. It’s a period film rich with elegant costumes and lavish sets embodying the true story of a mixed-race daughter of a British admiral who became an unwitting force of change in 18th century societal mores and instigated the end of slavery in the British Empire.

A fascinating story — tremendous, really — but for me the more interesting tale is how the story came to be told, and the movie made. So here it is:

A young British college student of Nigerian descent, Misan Sagay, encounters an obscure painting while touring a Scottish palace. A playful portrait of two affectionate sisters in lavish dress would probably not have stood out, except one of the women is black. Sagay admits to being stunned. Black people in 1779, when the painting was commissioned, usually played the role of a prop for the all-white personalities. These women had a relationship. There must be a story. Oh, was there ever a story.

The painting is of Lady Elizabeth Murray and Dido Elizabeth Belle; the identity of the artist is currently in dispute. It so intrigued Sagay that it drove her deep into the castle’s dusty and dank archives to research the work, and what she uncovered would years later result in a screenplay written on spec by Sagay, and a movie directed by Amma Asante.

Now really, can you imagine being so moved by a painting as to devote years to uncovering its backstory? I have to be honest; this is not a genre that attracts me. I probably would have walked by with only a cursory glance. I say this with great shame because I do love art history and the history that art can invoke, but just how much have I missed by limiting myself to my own predilections? Granted, if I came upon an 18th century painting of a round-faced, pasty-white, freckled Irish lass surrounded by her ethnic opposites, I would probably go to the trouble of googling it for more info…but dusty dank barely legible archives? Maybe not so much.

Sister Wendy, the pride of BBC art histories, tells us that to spend less than an hour with any work of art is to not have seen it at all. I adore Sister Wendy, and she quite possibly may be right. I would say that you can see a lot in less time, but no, you could not possibly know it.

So, with so much great art out there, what’s an art lover to do? I mean, there’s only so many hours in a day, days in a week, weeks in a year, and the opportunities to immerse yourself in art. Do we try to view as much as we can in the time allotted us? Go for quantity? Or do we only pick those few that touch us there and uncover all we can about them and their creators and reach for quality time? I must admit, I’m starting to lean towards the latter. Beloved works of art can become as friends. Would you prefer 100 acquaintances or six true and great friends?

I salute Misan Sagay for her tenacity and for her inspiration to look a little closer. I very much look forward to seeing “Belle,” though before then I am pledged to spend much time engaged with the painting that inspired the movie.