The Spirit of Marco 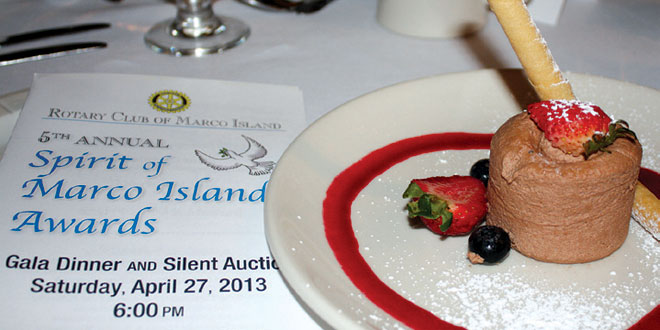 “I’ve always said that the nice thing about us is when you ask one of us to do something, you automatically get two people. We’re a team. Kind of like Batman and Robin. Only, I just realized that I’m Robin!” These are the words of Lou Prigge, spoken on the evening of April 27th at the Fifth Annual Spirit of Marco Island Awards Gala and Dinner, hosted by the Noontime Rotary of Marco Island.

Lou Prigge and his wife Barbara, were presented with the last of the five awards that evening, but their gratitude was beyond any other. Known for giving their time to just about every charitable event on the island, as well as for their beautiful holiday decorations at their home on Collier Boulevard, it was no surprise the couple received the award.

After realizing his true role in the partnership he shares with his wife, Lou handed Barbara the microphone saying, “Here you go Batman.”

With a beautiful bouquet of flowers in her arms, and fighting back tears, Barbara simply said, “Thank you all very much.”

Four more awards were handed out that evening. Emcee for the night, Al Diaz, reiterated the idea behind the evening. “This is our Fifth Annual Spirit Awards,” he said. “The purpose of the awards is to recognize individuals and businesses that enhance the community; and Marco’s a great community. A lot of people volunteer and give back. So, this is our opportunity, once a year, to recognize those people who give so much of their time and effort to make this island so special.”

A delicious three-course meal of a mixed greens salad, bacon-wrapped filet and skewered shrimp dinner along with a chocolate mousse dessert to die for, was provided by the host location, Bistro Soleil. Throughout the meal, the five recipients were called up and given their awards.

George Schroll was honored next. A member of Noontime Rotary for 21 years, Schroll was twice named Rotarian of the Year. “He has served on the YMCA Board for 20 years – since 1993,” stated Diaz, prior to Schroll receiving his award from Noontime Rotary President, Dr. Loan Lam. Al continued, “He was the 2003 Naples Daily News Citizen of the Year. He chaired the Collier County Water and Waste Authority, is graduate of Leadership Marco and is on the Board of Trustees for Police Foundation. One of his biggest achievements, in my opinion, is that he is Chairman of the (Noontime Rotary) Scholarship Committee. He increased our scholarships from two $1,000 scholarships to three scholarships of $3,000. This is for all four years. So we really give away three scholarships of $12,000 over four years per student.”

Scott Campbell with Physicians Regional Healthcare was honored next. Through Physicians, Marco Island has benefitted with a new health care clinic, has seen support of the Marco Island Chamber of Commerce and the Fourth of July Fireworks fund, to simply touch on the generosity of Campbell and Physicians Regional. When asked to name a few words describing Campbell, members came up with these adjectives: optimistic, integrity, driven, “and one of the best comments was servant leader,” stated Diaz. “That says a lot about someone. That is someone who leads by example.”

From the beginning, the Marriott has been involved with the Marco Island Academy High School of which Rick is on the Advisory Board and Building Fund. He is on the board of directors for the American Cancer Society, a member of the Tourist Development Council and runs a Golf Charity that raises over $75,000 to benefit local schools.

As the Spirit to Serve Award is all about service, the evening was a two-fold event. A live and silent auction took place, with all proceeds going back to Noontime Rotary’s scholarship fund.

The evening celebrated service and selflessness. Many past award winners were present who still continue to contribute to the community. Attendees were not shy about bidding on both the live and silent auction as they knew the importance of the Rotary’s scholarship fund.

Simply put: the evening was full of gifts for people who are constantly giving of themselves.