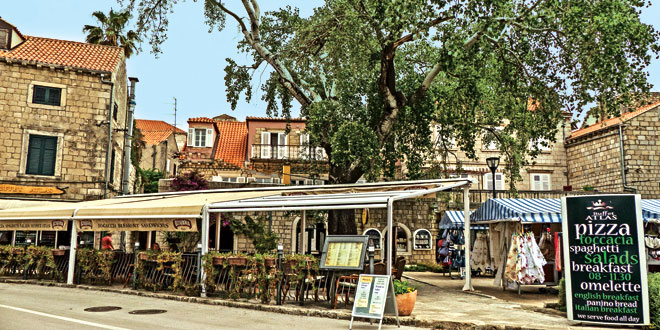 Croatia’s mainland coastline is 1,100 miles of drama and beauty. Offshore, there are 1,200 islands in the Adriatic. The beauty is almost indescribable: deep turquoise water dotted with both rocky and green islands, large bays, isolated coves, rugged ridges and bluffs, dark forests, fertile fields and orchards.

Dalmatia encompasses a long part of the Croatian coastline. The term Dalmatia comes from an ancient Illyrian tribe, and the area is so named historically and geographically. Dubrovnik is considered part of the Dalmatian Coast, and there are some easy day trips that can be made from this city.

Cavtat in the Konavle Valley, a rich agricultural area that was heavily damaged during the Yugoslav War in the 1990s, lies at the southern end of Dalmatia. On the way to Cavtat, one passes through the Îupa Dubrovaãka suburb of Dubrovnik, whose beaches were once reserved for the Yugoslav army and dignitaries. The hotels there are still standing, but remain deserted. After a three-week barrage during the war, they are just black holes waiting to be replaced. Only recently has one, the Hotel Orlando, been razed with plans for a new four-star resort.

Originally called Epidaurum, Cavtat is an appealing town with a waterfront

promenade, the Riva. There are some notable churches, art galleries, a mausoleum built by famed Croatian sculptor Ivan Meštroviç, a monastery, restaurants and cafes. But, mostly, Cavtat is a peaceful alternative to Dubrovnik, with a shady, circular walking path that follows the water and has views back to that larger city. It can be reached by boat, bus or car, and is about half an hour from Dubrovnik.

An interesting side trip on the way to Cavtat is to one of the three water mills that have been restored. Mills dating to the 1400’s were once a thriving industry here due to the power of the Ljuta River. With industrialization, they were all closed by the 1940’s. Today, three have been fully restored and are operational. The one we visited had been operated by the present owner’s grandfather.

The vineyards of the Konavle are known for their cabernets and merlots. Some of them offer tastings, and organized wine tasting tours booked out of Dubrovnik are popular.

The Elaphite (deer) Islands are a popular day trip from Dubrovnik. There are daily ferries to one or all three of the inhabited Elaphites: Koloãep, Lopud and Šipan. Lopud is the most popular; ·ipan the largest.

The walled Old Town of Korcula.

into the Adriadic, the Pelješac Peninsula is home to Korãula Island. The island’s centerpiece is Korãula Town, whose medieval architecture and pedestrian old town make for a pleasant day trip. The Greeks named the island “Black Corfu” due to its thick cypress and pine forests; it is claimed that Marco Polo was born here. One enters the old town by ascending a classic staircase and passing through a fourteenth century gate. There is an interesting museum, cathedral with accompanying treasury, an icon gallery and some lovely jewelry shops. On Thursday evenings (and Mondays during the summer), there is a performance of the traditional Moreška sword dance in an open air theater. This dance, which tells the story of a battle between forces for the fate of a princess, is unique to Korãula, having been performed here since the 15th century.

Korãula can be reached by ferry, bus or car. The drive there passes through the towns of Ston and Mali Ston, known for their more than three miles of 14th century walls. Built to protect the Republic of Ragusa (Dubrovnik) from the Venetians and Ottomans, it is claimed that these walls are the second longest in the world after the Great

Staircase leading up to the medieval Old Town on Korcula.

Wall of China, but this can be disputed. The Ston area is also known for its salt, mussel and oyster harvesting. Most of the mussel and oyster farming was destroyed during the war; only about 30 percent of it has been recovered. The trip to Korãula also passes through vineyards, some of which can be visited for wine tasting and purchasing.

Dalmatian cuisine reflects the various ethnicities that have ruled this area. Seafood is fresh and plentiful; it is said that mussels from Ston are among the best in the world. Octopus is popular; I grew quite fond of grilled hobotniãe. Meat is also popular, especially barbecued kebobs. There is a sort of sausage called çevapãiçi, grilled minced meat that my husband raved about, and he thought that the homemade Croatian prosciutto, pršut, that we had at a local farmhouse was better than any he had tasted in Italy or any of the Serrano ham he had in Spain. A speciality is peka, meat prepared under a metal dome on an open fire. Vegetables are readily available, and while salads tended to be unexciting, the grilled vegetables were wonderful. Chicken and surprisingly turkey, are on many menus. As a requisite for

One of the many hidden coves along the Dalmatian coast.

joining the EU, all Mediterranean countries are required to produce a certain amount of olive oil, and Croatia’s figures heavily in its food preparation.

Dalmatian wines are regional and excellent. The best cheese to go with that wine is Paški sir made of sheep’s milk on the island of Pag. A real treat is homemade grapa (loza) or herbal brandy (travarica). I don’t usually bother bringing home bottles of wine or liqueurs, but on this trip, I did pack a bottle of the most wonderful lemon brandy I have ever tasted (even better than the lemoncello in Amalfi), homemade at the same farmhouse where my husband had the pršut.

Introduced by the Austro-Hungarians, beer is also popular and good, although most of it comes from northern Croatia rather than Dalmatia. Incidentally, the Dalmatian dog is named for this area but there is no evidence that it originated here. We only saw one Dalmatian dog while we were in the area, and no, he wasn’t at a firehouse.