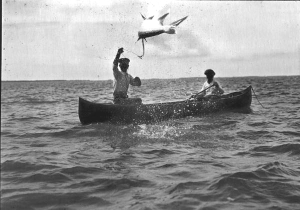 After the Civil War, there were few rugged pioneers who chose to settle on the old shell mounds that the islands of Southwest Florida offered and attempt to eke out a living. Few were willing to endure mosquitoes, heat, and almost total isolation, with towns and villages accessible only by boat and no railroad or roads within hundreds of miles.  Homesteaders tried to make a living by commercial fishing in the rich estuaries, burning buttonwood trees to make charcoal for sale in Florida’s largest city, Key West, or planting garden crops of vegetables and fruits to be shipped by vessel to larger markets for resale.

But the ‘Silver King’ changed all of that, almost as fast as the flash of silver a rolling tarpon makes on the surface of the water.  An 1874 report from New Smyrna Beach reported that, “the tarpum (tarpon)…is rarely taken with the hook and line, as it generally carried away the tackle (being used), however strong….  The only successful way, I am told, is to strike it with a harpoon…”

The Fort Myers News Press reported that Mr. W.H. Wood of New York had, between March 19 and 31, 1885 landed five tarpon averaging over 100 pounds each on a rod and reel; this feat, that a tarpon could be caught by a sportsman, was given wide national publicity. The sport-fishing industry went so wild about this new game fish that the tarpon gained an almost mythical stature, and the discovery started an international craze. Much of the thrill was in watching the acrobatics of a five or six-foot fish jumping vertically to reveal its entire body length.  By 1888, to capture the excitement of this new sport, The Angler’s Publishing Company issued a booklet: The Tarpon or ‘Silver King’; Its History and Method of Capture. Edward Von Hofe, who caught tarpon near Marco Island, designed the ‘star-drag’ reel that became the popular tackle of the day.

Hotels were immediately under construction to house the sportsmen flocking into Southwest Florida. The San Carlos Hotel was built in St. James City on Pine Island; the Marco Inn, built in 1883 was remodeled to a hotel;  The Tarpon House was built in Fort Myers at Punta Rassa (now the east side of the Sanibel Island causeway).  Tourism was so strong that prominent houses were converted into 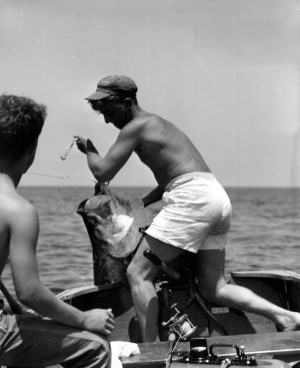 hotels to meet the demand. The Roach home on Useppa Island took in guests and later became the Tarpon Inn (now the Collier Inn); the Barfield residence on top of Indian Hill in the Caxambas area of Marco Island became the Heights Hotel; the Storter residence in Everglades City opened for lodging and was later converted into The Rod and Gun Club.

The Fort Myers News Press began publishing weekly lists of local tarpon catches which showed incredible interest in this sport: in 1891, 152 tarpon were caught, and by 1894 they recorded that 438 tarpon had been caught!

The major tarpon fishing season ran from April to June of each year and rooms were rented to paying guests. The Marco Inn rented rooms for $2.00 a day while, in 1906, one could stay in the Tarpon Inn on Useppa Island for $3.50 a day including a room with a bath, all meals, and towing of one’s skiff to and from the pass at Boca Grande.  In the early days guides rowed the skiff to the tarpon areas and after a tarpon was sufficiently worn down, the boat was rowed to the shallows where the fish was reeled in and gaffed. Those who could not afford a rod and reel used leather gloves with a twisted cotton hand line.  An actual guide and bait (usually cut mullet) cost extra money.

Tarpon look prehistoric and are, as documented by fossils; they date back 100 million years to the Cretaceous period. Tarpon have been recorded living up to 63 years old, but their average lifespan is 55 years, assuming, of course, life is not shorted by their natural enemies: sharks, porpoises, and alligators. Tarpon lungs, unlike hose of most fish, can accept oxygen directly, so they roll on the surface as they gulp air, creating the characteristic flash of silver.

Wealthy New Yorkers and English sportsmen jumped on sailing yachts and steamers to get to the fishing grounds of Southwest Florida.  New fishing clubs started and at The Tarpon House at Punta Rassa, they invented the system of mounting one scale for each fish with the date, name of the angler, and weight of the tarpon. On Useppa Island The Izaak Walton Fishing Club was formed (named after the author of The Compleat Angler and considered one of the most exclusive sporting 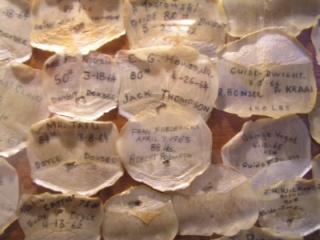 clubs in the world), and at the Marco Inn The Tarpon Club was initiated for any guest who caught a tarpon weighing 60 pounds or more. The guest was permitted to put a scale on the wall with his name, date, and size of fish, and received a bottle of champagne with dinner plus a silver pin reading the “Marco Inn Tarpon Club”.

The rich and famous, as well as ordinary sportsmen flowed into Southwest Florida changing everything almost overnight. Thomas A. Edison, a dedicated angler who came to Ft. Myers in 1886 to fish, soon purchased a home and spent 46 winters in Florida. His friends Henry Ford and Harvey Firestone followed and joined Edison in catching tarpon in the Caloosahatchee River. The Louisville Journal reported in 1889 that Walter Haldeman, the publisher of the Journal and founder of the City of Naples, had “hung a magnificent tarpon and played him for a couple of hours…the silver king weighed not less than 100 pounds, but was lost…”

Captain Bill Collier in Marco and the Daniels Brothers started constructing special tarpon fishing vessels to meet the demand of the fishermen. In the spring of 1895 Captain Collier found wood and cordage while digging on his property and mentioned the find to Charles Wilkins, a tarpon fisherman. That conversation triggered a series of events that led to the discovery of over 2,000 Calusa artifacts found in Old Marco the following year.

Barron Collier came to Useppa Island in 1911, invited to fish by the owner of the island, John Roach. In August of that same year he purchased the entire Island for $100,000. By 1923 Barron Collier had purchased 1,300,000 acres of land in what was then southern Lee County. He also purchased or built twelve hotels in Florida, including many along the coast of Southwest Florida: the Floridian in Tampa; the Sarasota Terrace; the Useppa Inn (now the Collier Inn); the Gasparilla Inn in Boca Grande;, The Rod and Gun Club; and the Everglades Inn in Everglades City. Most catered to sportsmen whose sole purpose was catching tarpon.

Theodore Roosevelt came to Charlotte Harbor in March of 1917 to fish for tarpon and, instead, caught a 16-foot manta ray. Meanwhile, J.P. Morgan fished for tarpon while staying at the Gasparilla Inn in Boca Grande. 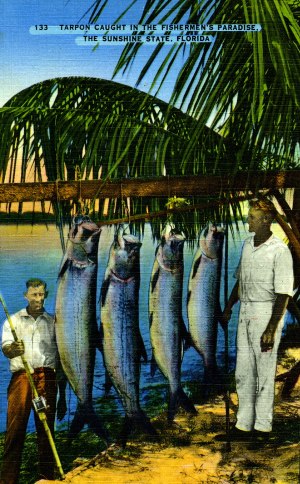 through the 1940s, 1950s and into the 1960s, filling hotel rooms and providing employment for famous local fishing guides like Preston Sawyer, Hiram Newell, Rob Storter, Ralph Doxsee (known as ‘a Tarpon man’), Jack Thompson, Doyle and Dwight Doxsee,  Ted Naftal, and many others.

If you are ever asked for one word that opened up Southwest Florida to tourism, that one word is: TARPON.

“Now let me talk of Florida. Even at Punta Garda (Gorda) we began to feel Tarpon in the air, and by the time we reached St. James there was nothing
but Tarpon, Tarpon everywhere. The people there think and breathe nothing else. The sole standard of manhood is the catching of Tarpon, and the skill shown therein.

So on the second day we were rowed by our boatmen about six miles away to a place where they said tarpon frequented. Scarcely had we been fishing there an hour before, O joy! hold my sides! your brother, O Nannie! caught and actually “landed” a tarpon! and I sat back in the boat knowing that the utmost height of my life had been attained. Perish the Variorum! Perish Shakespeare! The hands that have reeled in a tarpon need never thereafter descend to puny themes. It was a fine one, weighing a hundred and thirty-five pounds and six feet long. Verily it is the most exciting work on earth. In order to shake the hook out of his mouth the huge creature leaps out of the water, a dazzling column of pure silver, rushes hither and thither, dives down deep, comes up again with a mighty rush of water, darts off swift as lightning. After it was all over, and it sometimes lasts an hour, I quaked in every limb and I was so weak I couldn’t have raised my hand to my mouth.”