The Sands of Time 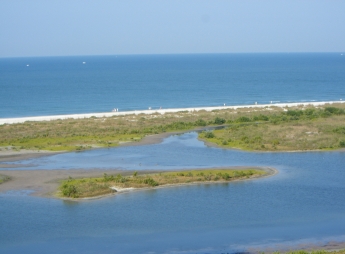 Marco Island’s beach is the jewel of our community. With approximately 6 miles of beach from Hideaway Beach to Sand Dollar Island to the main (Tigertail Beach Park to Cape Marco) beach, it gives walkers, fishermen, shell collectors, sunset (and sunrise!) gazers, both residents and visitors, so much enjoyment.

The beach has experienced changes, as any barrier island’s shoreline, over seasons and time. In 1991 the beach was originally renourished by pumping offshore sands. In 2005, the southern area of the beach, from the Hilton Resort to Cape Marco was renourished following erosion caused by Tropical Storm Faye. Sand bars naturally build offshore, and a very large one, named Sand Dollar Island, could actually only be reached by boat until 1999.  At that time, this large sand bar, or shoal, connected with the main beach, creating the vast beach area just south of the Tigertail Beach lagoon system. Though it provides excellent storm protection, recreation, and a shorebird area, it is an area of concern to beachfront residents and beach goers. This area of beach is so wide, almost 800 feet at the widest point, that the natural dune-building by the dynamics of sand, surf and tide occurs nearer the water creating a nearshore berm.  When high tides or surges from storms move water over the berm, the waters do not naturally flow back to the Gulf of Mexico, thus causing standing areas of water, saturated sand, and changes to the topography of the central beach area.

Laser grading of the beach is used to improve the slope and topography of the beach and typically performed as part of a beach renourishment project. The optimum slope for a beach is a negative gradient towards the Gulf at a 10:1 ratio. The last time the Marco Island beach was laser graded was 2006. The Florida Department of Environmental Protection (FDEP) permits only one foot of material (sand) to be removed and redistributed from the berm area for laser grading at a time. When the 2006 grading was completed, it improved this area for about one season but the results did not last and the beach reverted to the condition it is in now – standing water and wet areas.

Because of the beach’s extensive width with the nearshore build up of the berm and the limited amount of sand that could be moved if a one-time laser grade project was permitted, the City of Marco Island’s Beach Advisory Committee met with Collier County Coastal Zone Management Department staff, who rake and maintain the Marco Island beach, to discuss a project to re-distribute sand over a long period of time using the beach rake tractor and box-blade equipment to be able to move the volume needed to improve the slope of the beach. FDEP would allow this method which would allow more volume of sand be redistributed over a long period of time resulting in long term improvements. County staff has proposed to the City of Marco Island’s Beach Advisory Committee that they will to continue the current raking/grooming of the beach two days per week and then focus three days per week on redistributing the sand with the box blade method. This would not impact the regular raking and maintenance of the entire beach and would be a long-term solution to this problem area. The redistribution of sand in this area could occur approximately 5 months per year – outside the sea turtle and shore bird nesting seasons.  The project could start in late February 2010.

For more information on the Marco Island beach, accesses and amenities, a brochure can be found at the City of Marco Island’s website, www.cityofmarcoisland.com or at City Hall (50 Bald Eagle Drive, Marco Island, FL  34145).

Please do your part to keep our beach beautiful:
Leave only your footprints by taking your trash home
No Glass containers
Live shelling prohibited
No dogs or pets on the beach
Protect the fragile sand dunes
Share the beach with wildlife
No camping or fire pits
No vehicles of biking

For Sea Turtle conservation, keep our beaches dark between May 01 – Oct 31.

Nancy Richie and her husband Michael, have lived on Marco Island since 1992; they have two daughters, Madeleine and Camille. With a Bachelor of Science degree in Marine Biology from Texas A&M University at Galveston, she was the microbiology analyst for an environmental laboratory, Enviropact, and then a hazardous waste inspector for the Collier County Pollution Control Department before becoming the City’s Environmental Specialist in May 1999. In 2005 she received the Guy Bradley Award from the Collier County Audubon Society for her stewardship of Marco Island’s environment.  A few of her duties at the City include: vegetation trimming permitting, beach vendor permitting, protected species monitoring, water quality monitoring, staff representative for the Beach Advisory Committee, and a liaison with federal, state, county and local environmental agencies and groups.