The Rich Texture of Santa Fe 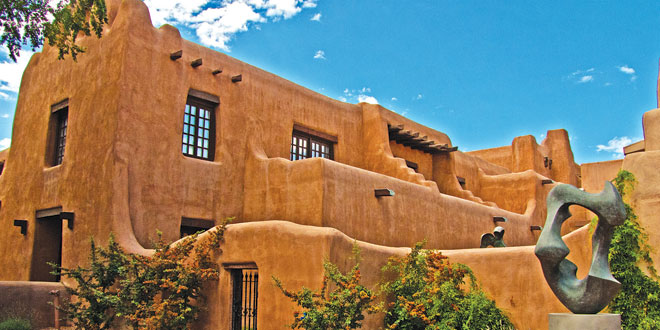 Situated at 7,000 feet above sea level in the foothills of the Sangre de Cristo Mountains, the southern range of the Rockies, Santa Fe has a mild climate with an annual rainfall of 14 inches and snowfall of 32 inches. Visiting this capital of New Mexico, three aspects impressed me immediately; the architecture, the art, and the richly textured history reflected in today’s mixture of cultures.

It’s not that we were unfamiliar with adobe or pueblo style architecture. We once house hunted with friends in St. George, Utah where all the newer developments emphasize this style. And we have good friends in Prescott, Arizona who have a beautiful pueblo home. What was so unique in Santa Fe was the ubiquity of the style. Not only the homes, but also the shops, restaurants, hotels, spas, and museums feature this style.

The early Native Americans used building materials immediately available – sand, clay, water, and fibrous material – such as sticks or straws – to build their structures of adobe bricks, with large logs called vigas providing support. When the Spanish explored this area in the 16th century, they called the adobe communities in which the natives lived “pueblos,” which means village in Spanish. Although the emphasis on what has become known as “Santa Fe style” can be traced to a movement begun in 1912, the passing of the Historic Zoning Ordinance in 1957 insured perpetuation of Spanish Territorial and Pueblo style architecture.

Santa Fe has attracted a large number of artists. As we drove about the area surrounding Santa Fe, I began to “get” what artists see here. The striations of color and interplay of light and dark begin in the flatlands and build to a crescendo as they rise into the mesas and mountains with the variegated sky topping it off.

Perhaps because we visited during one of Santa Fe’s many fine arts and crafts markets when tents are set up in the parklike center of the Plaza, the focal point of Santa Fe, we thought the number of artists here was impressive.

First, there are the individual artisans. In addition to the various regularly scheduled markets, there is the Native American Vendors program. Daily, Native American artists can be found under the portal of The Palace of the Governors, now the New Mexico Museum of History with their works spread out on bright blankets. According to one of the artists I spoke with, there are many Native American artists registered in this program. Each day, some show up for the 8 AM lottery which determines who will get one of the 68 designated spots. Yes, there are many shops selling Native American art in Santa Fe, but by purchasing through this program you are guaranteed authenticity and that profits do go back to the Native pueblos. There also is the Santa Fe Artists Market, again a lottery selection of fine arts and crafts from local artists at the Railyard Park, just outside the downtown area every Saturday from April through December.

Then, there are the galleries. Canyon Road, which was once a Native American trail, is the most popular location for a gallery stroll; there are more than 100 galleries, restaurants, and boutiques. One gallery after another, sculpture gardens, and hidden courtyards line both sides of the street for three quarters of a mile. Canyon Rd. is not the only location for galleries in this art friendly city; there are others spread about and the Guadeloupe District, the location of warehouses and the railway, is becoming increasingly popular for artisans.

Finally, there are the museums. Of course, Georgia O’Keefe is synonymous with Santa Fe and although her homes are a drive away, her museum is located downtown. I am an O’Keefe fan, but was a little disappointed in the museum. Through film, a docent talk, and displays of artifacts from her life, it did a wonderful job of educating about her.

There were works from as early as her teens and photos from throughout her life including early ones by her husband, Alfred Steiglitz, and later ones by Ansel Adams. There was a landscape that was fascinating in that there was a photo of the actual location right next to it; it was striking to see how detailed her representation truly was. I thought, though, that there were not a lot of her works in the museum. Perhaps they hang in museums and private collections elsewhere, but I was hoping to see more of her New Mexico landscapes.

Other museums in the city include the New Mexico Museum of Art featuring art of the Southwest, the Museum of Indian Arts & Culture, and a not to be missed Museum of International Folk Art. I know, folk art? Trust me, this museum tends to be a visitor favorite; even my husband who had to be cajoled into going enjoyed it.

The history of Santa Fe is rich. Here you will see what is said to be the oldest house in the United States, as well as the oldest public building and oldest church.

The earliest evidence of humans in this area dates to 25,000 BC and the Sandia people while Clovis-Paleo culture hunted and roamed the area around 9000 BC. Anasazi cliff dwellers, also known as the Ancestral Pueblo, may have been here as early as the 12th century BC, and the advent of agriculture saw the rise around 1100 AD of the Pueblo who were primarily Tewa people. Around 1500 AD, Navaho and Apache tribes came from the north, later followed by Utes and Comanches.

Coronado claimed this area for Spain in 1540. Following 300 years of primarily Spanish and Mexican rule, the Treaty of Guadeloupe that ended the Mexican American War in 1848 ceded New Mexico to the United States. New Mexico become the 47th state in 1912. A great overview of the history of the area can be found in the New Mexico History Museum.

The Santa Fe Trail, later became the Atchison, Topeka and Santa Fe railroad and eventually the famed Route 66 brought trappers, traders, merchants and cattle barons to this area followed by archeologists, artists, writers, oilmen, and the military. The mixture of Native American, Hispanic, and Anglo cultures is celebrated today in the art, food, heritage, festivals and faces of Santa Fe.

Santa Fe calls itself “The City Different”. It is, if nothing else, diverse, interesting, memorable, and unlike any other state capital I have ever visited.