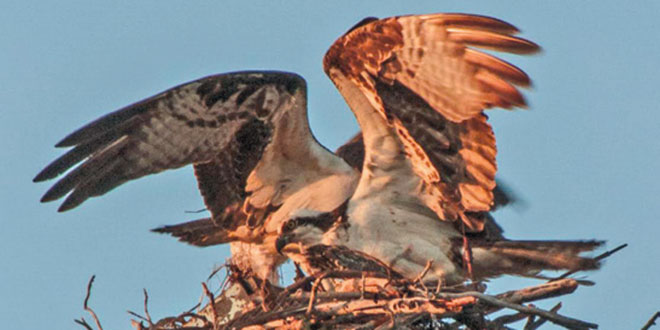 In December, a pair of ospreys did what most of their species do that time of year — they began building a nest.

Unfortunately, they chose as the location for their new abode the top of a seawall construction crane parked in a local canal. Neighbors reported this event to ever helpful and knowledgeable Nancy Richie, Marco Island’s city environmental specialist, who contacted the owner of the crane, Duane Thomas Marine Construction LLC, and Jo Barnhart of Florida Fish and Wildlife Conservation Commission’s (FWC) Protected Species Permitting Office.

According to the FWC web site, ospreys commonly nest on power poles, communication towers, water navigation devices, lighting fixtures, outdoor billboards and other man-made structures, as well as in decaying or dead trees. Sometimes, these large nests render the structure inoperable or present a safety hazard.

FWC typically will authorize permits for the removal of inactive nest (i.e. nests containing no eggs or flightless young) and usually require the permittee to build a replacement nesting platform/structure of comparable or better quality than the compromised nest support. Requests for removal of active nests (i.e. containing eggs and/or flightless chicks) are issued if the nest presents a safety hazard for the birds or humans. Active nest removal permits are issued with less frequency and on a case-by-case basis.

According to Angela Williams, FWC’s protected species permitting coordinator, the case of Marco’s persistent osprey pair is not unique. “It does’t happen very often, about 10 times a year,” she explained. “It is only unique in that the pair was nesting on an unsafe environment.”

Williams adds that a representative from Duane Thomas Construction contacted her office on Dec. 15 and applied for the permit to remove the nest. 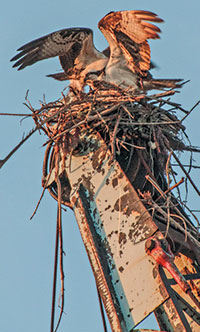 “We quickly issued it recognizing that it was an unsafe situation for both man and bird. The company was also experiencing an economic impact because of the situation, and there were no eggs or flightless babies in the nest,” she notes.

Generally speaking, these types of permits are good for one calendar year, and in the Marco case, the permit will lapse this coming December. The permit allows the contractor to remove the nest and discourage the birds from renesting in the same spot, hoping they will look for a more suitable location. Williams is optimistic about the renesting, as there is an osprey nesting platform located not far from the dock where the crane was sitting as well as a number of tall trees in the area.

Williams speculates that the osprey chose the crane for nesting purposes because “when it is erect it is the tallest, most prominent structure in the area,” making it an ideal place for the osprey to survey the land, hunt and protect their nest from predators.

Back on Marco, once the permit was obtained, the contractor removed the nest and moved the crane for a day to do some work at a nearby site. When the crane returned, the ospreys set about constructing another nest and began roosting in it. Early on the morning of Jan. 12, workers lowered the crane and destroyed the second nest; their permit from December was still good. Even as the crane was raised back into place, though, one of the pair dove and swooped at it, trying frantically to reclaim its “home.”

As the Coastal Breeze goes to press, this persistent pair is back atop the crane and sticks are once again beginning to pile up.