The Noes Arrive in Goodland 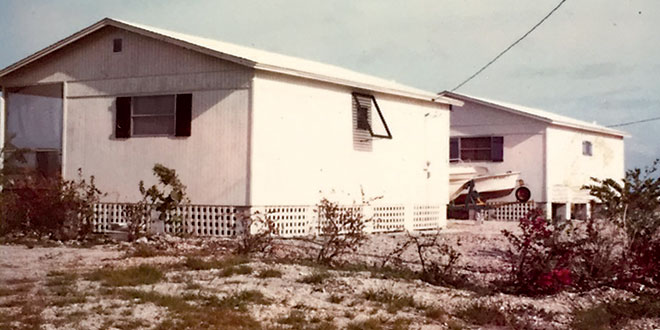 After the war, Walker Noe used his G.I. Bill to get a B.A. in English Literature from Center College in Danville, Kentucky (1948). Walker claims he never bought a book while there, but paid close attention and took good notes in class. He and his wife were housed in prefab housing for vets and were paid $110 per month. “That was more than enough to get by on,” Walker said. After college Walker taught high school, managed large farm operations, and finally moved back to Stanford where he opened a real estate and insurance business. This led to a job as a real estate appraiser in the Kentucky Highway Department. Walker was soon made head of the Real Estate Appraisal Division and finally retired in 1985.

In the late 1950s Walker’s dad Stiph (I didn’t make this up) bought a travel trailer and took a shine to Florida. In the winter Stiph and Nancy wintered in various Florida trailer parks. The Tamiami Trail was always a part of these winter excursions. In 1962, as Walker tells it, “My Dad noticed a sign

at the intersection of CR 92 (San Marco Road) and Tamiami Trail, (U.S. 41) which he had not noticed before. It noted that Goodland lay a few miles to the west, down CR 92. Stiph remembered that a good friend from Kentucky, Joe Pettus, wintered at a small trailer park in Goodland. He decided to pay him a visit. Pettus lived in a trailer park on Papaya Street, known as Drop Anchor. Walker’s parents fell in love with the place and stayed a while longer than they had planned, leasing a spot at Drop Anchor. At that time most of the development in Goodland was in the Highlands, a term used to describe the higher ground, built on Indian shell mounds toward Marco River. There was practically nothing west of Goodland Drive West. In 1962, Stiph Walker bought the house at 563 W. Coconut Ave. It stands beside the Carter Dock building on the corner of Goodland Drive. My dad was intrigued with this house. It was the first house on stilts and because you could drive into a car port on one side 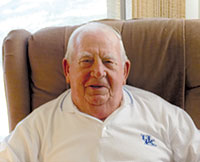 and park your boat in covered boat port on the other. Both have since been enclosed.

A Miami entrepreneur and businessman, T.E. “Ted” Curcie, had also discovered, Goodland and was coming over for fishing trips. In 1963, a year before the Mackle Brothers arrived on Marco Island, Curcie foresaw the development possibilities in Goodland. In July 1963, Curcie bought much of West Goodland, styled Goodland Isles, from the Collier Development Corporation. Walker Noe understood from his dad that this purchase included just about everything on the West Side of Goodland Drive including what is now the boat park. In 1964, Curcie incorporated as Goodland Inc., “with its principal place of business at Goodland Drive.” This would have been at the present day Carter Dock offices on the corner of Coconut and Goodland Drive. Curcie and Stiph Walker were now neighbors. Thus began the second wave of Goodland development.

Ted Cursie must have liked Stiph Noe’s house on Coconut Avenue, as he built one just like it further down the street as a model home (#576). Cursie may have envisioned that a house with both a car

and boat port would be a big seller. It wasn’t, but Cursie liked the model home so much he moved into it. It was solidly constructed with cement and I-beams. Ironically, John Carter later lived in this house and ran his marine construction business out of the old Goodland, Inc. offices.

In 1965, Stiph Walker saw his relatively peaceful neighborhood erupt into the clatter and clanging of a large dredge deepening and widening the canal and forming a small bay in front of his house. Curcie was not only running his development company next door but was also bringing in water and collecting garbage for Goodland. The Carter Building also housed the town cistern. Curcie owned and ran the whole shebang as Goodland, Inc. The cistern’s sturdy sides can still be seen at the western end of the building. Water lines had been laid from the cistern to nearby lots. Every morning, Curcie would bring in a tanker truck full of water and pump it into the cistern. According to Stiph Walker, there was a rush in each serviced residence to get as much water 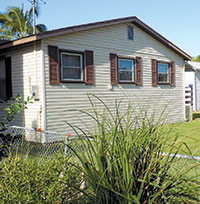 from the tap as they could before the cistern went dry later in the day. Other residences had their own cisterns, many of which can be seen today. A rise in the ground capped by cement is most likely a cistern. “My dad was outgoing and amiable,” recalls Walker, “As neighbors, they (Curcie and Stiph) took a liking to each other. They also trusted one another.” Curcie had platted his holdings into residential lots. Stiph could see a beautiful bay being dredged along Goodland Drive. He wanted a couple of those bay front lots. In negotiations with Curcie, Stiph promised to bring more Kentucky investors down to Goodland to buy Curcie’s lots. A commission was likely involved for Stiph. As an extra incentive, Curcie gave Stiph a couple shares of Goodland, Inc. and probably a good deal on the lots. Stiph bought two lots and his Kentucky friend, Joe Pettus, bought three lots on Goodland Drive. Walker Noe, 92, still winters on one of the lots – 521 W. Goodland Dr. Pettus’s son-in-law, Hurl (I didn’t make this up either) Durham, 84, winters next

door – 519 Goodland Dr. Stiph Noe did succeed in bringing more Kentuckians down, but the only ones left are Walker Noe and Hurl Durham. When no more Kentucky buyers could be produced, Curcie asked for the return of the Goodland, Inc. shares.

“Dad also grew friendly with Cursie’s dredge foreman,” Walker recounted, “He talked him into a deeper dredge at the water line and more fill on his property. Dad also noticed that some mighty big limestone rocks were being dredged out of the bay. He talked the foreman into depositing one of these rocks on the street side of his property as a curiosity.” The rock has resulted in at least one fender bender and probably numerous barked shins and stubbed toes. It has since proven too heavy to move. Stiph Walker paid $1,750 each for his two lots. In 1965, over on Marco Island, the Mackle Brothers Deltona Corporation was picking up steam and was offering more rental cottages from a Caxambas fishing camp. The cottages were fully furnished, including lamps, kitchen utensils, and a window air conditioner. The sale price of

$8,250 included moving the house to Goodland. To buy the lot and move a fully furnished house cost Stiph $10,000 total. Joe Pettus did the same next door.

In 1977, Walker’s father died and he ended up buying the cottage from his mother, who no longer wished to come down. Until 2005, Walker and his wife Betty would come down from Stanford for winters, doing a lot of fishing and entertaining of their children and grandchildren. Additions and add-ons were made to the cottage. After Betty’s death in 2005, Walker continued to come down by himself. He has since taken a lot of our money, shooting pool over at Lynn Albee’s house and has been joined by a vivacious companion, JoAnne Miracle, a neighbor in Stanford. Today are three things that Walker reveres – University of Kentucky basketball, Stanford, Kentucky, and Goodland, Florida. He has been faithful to all three for almost 50 years.