The night my foot got caught 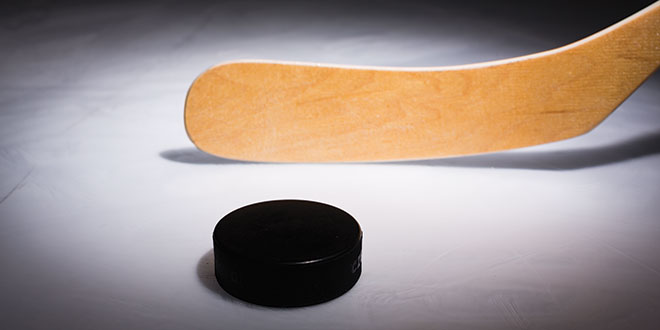 In memory of Monte Lazarus and his contributions to Coastal Breeze News, we are publishing many of his humor columns again in coming editions. They will bring as many smiles now as they did when first printed. Enjoy!

One of the things we enjoy every now and again is an Everblades hockey game at Germain Arena. It’s a great arena for spectators; just about every seat is good for viewing the game. Unlike the new mega-arenas, Germain is small, cozy, friendly and reasonably priced. A family of four can go for less than $100, if they don’t go crazy buying jerseys and other stuff for the kids. The hockey is good from our perspective: it’s a lower league, so the players are very young; and there’s considerably less fighting and dirty play than in the big leagues.

Thanks to a friend we recently got four tickets for a game, and off we went. The seats were great: second row, right next to the visitors’ bench. The players were right next door flashing their (1) recently broken noses, (2) missing teeth, (3) band aids and stitches. Yes, folks, hockey is a contact sport.

When the game began we knew we were in for a wonderful night. There was lots of action and the game was close. One leather-lunged lady right in back of us apparently disagreed with my appraisal of fighting and dirty play. She alternated screaming among: “Kill Him”, “Hit Him” (when she was feeling mellow I presume) “Smash Him”, and “Start Fighting”. Since she was missing a few teeth of her own I assumed she was either a hockey or a football player herself. However, now that I ruminate about it I’m inclined to believe she was simply pro-violence.

There was only one problem: since our seats abutted the bench that was in line with our second row, we found it hard to see the action to our left. The visiting team kept standing when the action was to the left, and we were reluctant to suggest to a group of toothless hulks that they kindly refrain from standing, and that they should behave themselves. We were only separated from them by a thin sheet of plastic, and it would have been unseemly for us to be pummeled into insensibility by a bunch of young guys trying to make a living.

Good fortune arrived! between the second and third periods the first row emptied. My wife – alert as usual – said that she was moving to the first row for an unobstructed view of the left goal. Brilliant! She walked down our row, then down to row one. My friend’s wife, sprightly, comely, and in great shape, simply stepped over from our row down to the seat in row one. My wife, and friends, urged me to follow her. What? Me take the easy way? I am no wuss! I decided to step over from my seat to a seat right in front of me, thereby demonstrating my agility and excellent conditioning (but ignoring my lack of brainpower). I was duly warned. Three voices in unison said: “Walk around, it’s easier; you’ll have trouble if you step over.” Being a male only firms up the resolve when someone says you can’t do something. It became a challenge.

I stepped firmly from row two to row one. Row one was apparently not pleased with my decision, because the seat in row one immediately snapped from “Sit” to “Up”. As a consequence my feet were both caught in the gap behind the up seat. I was able to extricate one foot, but the other was being punished by the seat that refused to budge. I was trapped. My wife was a combination of concern, annoyance, amusement and bewilderment. Still in my macho phase I put on my best toothy grin and explained to one and all that I was fine and would easily get out. I couldn’t. I could not reach down. I could not move the seat. I could not wiggle my foot out of the devilish trap. I thought I might get my shoe off and free my bare tootsie. What if I couldn’t? My fallback was my tiny Swiss Army knife, since I had recently read about the climber who sawed off his arm when he got trapped. That did not seem too promising, especially since my trusty knife can barely open envelopes.

Urged on by my wife and friends, and even the leather-lunged lady, I wiggled and coaxed and voila! My shoe was off. Free at last! I sat quietly. The rest of the game was great. In row one we saw everything and I emerged unscathed, except for a gigantically bruised ego.

THE MORAL OF THE STORY: “Beware the male ego: you’re not nearly as young and fit as you think. (NOTE: those of you who say the moral is “Look Before You Leap” win second prize – two seats in row two.)