The Name is the Thing 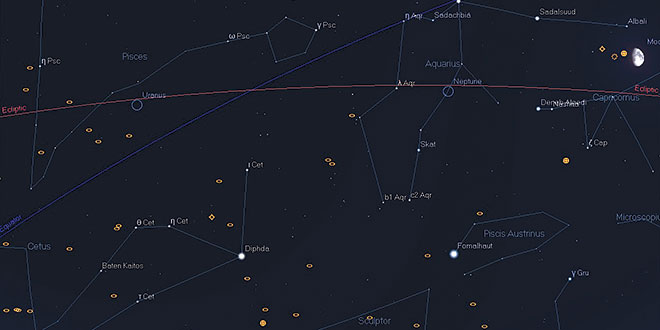 Looking South, 11PM on October 3. Our club telescopes will be available for public viewing all day and into the early evening October 4th at Corkscrew Swamp Sanctuary. SUBMITTED

How did the planets and stars get their names? For planets, the answer is easy. They were named after gods. Indeed, it was believed they were gods. Planets were named after different gods at different times in different civilizations, but the names we use today are those of Roman gods. The names follow a certain logic. Mercury was the messenger of the gods so he needed to move quickly as does his namesake planet. The planet Venus is quite beautiful and so was named after the goddess of love and beauty. Mars is as red as blood so it was named after the god of war. Jupiter was king of the gods and took the throne after defeating his father Saturn in a war.

Once the telescope was invented, and much later spacecraft, new features and new objects were revealed that just cried out for names. Gradually, certain naming conventions were developed. Satellites of Jupiter are named after the god’s many lovers, while Saturn’s moons are named after the god’s brothers and sisters — the Titans of mythology. Since Mars is a son of Jupiter and Jupiter is a son of Saturn when the next planet further out was discovered, it was named Uranus after the father of Saturn. The planet Neptune has a very blue color and so was named after the god of the sea. It should be noted here Neptune’s color actually has nothing to do with water but is a consequence of methane in it’s atmosphere.

Asteroids were named after Roman deities as well and later on Greek gods too. As more and more asteroids were discovered, the list of classical names grew thin, and other types of names were pressed into service. Astronomer’s wives and girlfriends names are common as well as numerous scientists, politicians, artists, composers, celebrities, TV characters and the occasional dog or cat. All asteroids are also given a numerical prefix in order of discovery so one can refer to a specific asteroid as 9007 James Bond (that’s a real name!). Discoverers are not allowed to name an asteroid after themselves, but colleagues can make deals to name asteroids after each other.

A few hundred stars have proper names handed down to us from antiquity; of these names, there are only about 20 to 30 that are in common use. Most astronomers do not know or care what a particular stars name might be. Instead, they use catalog designations almost exclusively. Certain companies claim to name stars after people, but they have no authority to do this. Currently, only the International Astronomical Union has the right to assign official names to celestial objects, and they do not name stars.

Mr. Usher is a Director of the Everglades Astronomical Society which meets the second Tuesday of the month at 7:00PM in the Norris Center, Cambier Park, Naples. E-mail: usher34105@earthlink.net