The Moon Puts on a Good Show 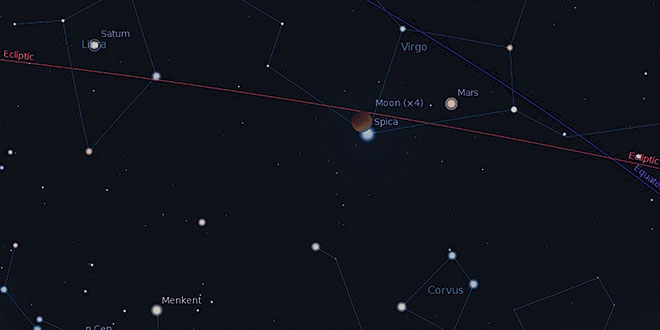 Facing southeast, 3:07 a.m., Apr. 15. Look for the moon near Spica; are you having trouble finding it? It must be the eclipse! SUBMITTED photo

During the early morning hours of Apr. 15, the moon will undergo a total lunar eclipse. Unlike its distant cousin the solar eclipse, a lunar eclipse is perfectly safe to look at as long as you please.

A lunar eclipse happens when the moon passes through earth’s shadow; this only happens at a full moon, and the moon’s orbit crosses the ecliptic (hence the origin of the word “ecliptic”). Another way to express this is to say the centers of the earth, moon and sun temporarily lie in a straight line or nearly so; astronomers speak of this alignment as syzygy – a mostly useless word but great in a Scrabble® game!

The eclipse begins at 12:53 a.m. as the moon moves into the penumbra, a region of partial shadow. This is a truly under-whelming event, so don’t bother to wake up for it. The real action begins at exactly 1:58:19 a.m. when the moon begins to enter the umbra; the region of dense shadow. With a small telescope or steady binoculars you will be able to see earth’s shadow sweep across the lunar surface. Totality comes a little over an hour later at 3:06:46 a.m.

If the earth had no atmosphere the moon would be invisible at this point. However, sunlight is refracted around our planet by our thick layer of air and the moon appears red in color. The color can vary from an almost invisible brick red to a bright red with the lighter shade being most common. Essentially, the moon is illuminated by all the sunrises and sunsets occurring on our home planet. The color is impossible to predict in advance as it is heavily dependent on the worldwide weather. Usually for the very dark brick color something odd must be happening on earth, like a major volcanic eruption. (Think Krakatoa.)

If you get up mid-eclipse the moon may be a bit difficult to locate at first. Fortunately, the moon will lie very close to the bright star Spica and not far from the even brighter Mars.