The Man Who Put Man on the Moon 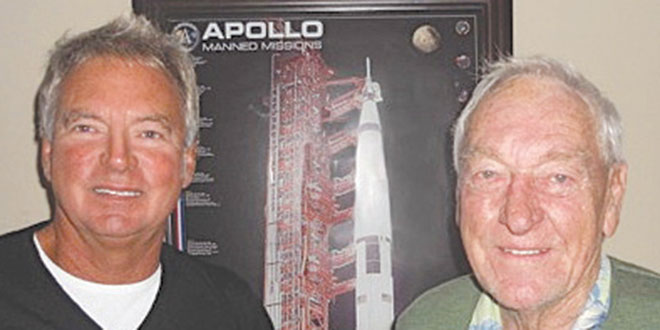 Rocket scientist Darrell Loan took the Marco’s Chapter of the Daughters of the American Revolution out of this world at its Jan. 15 meeting at the Hideaway Beach Club.

Loan, a part-time Marco resident, was one of the few “rocket men” whose brilliance, imagination and dedication put the first men on the moon, astronauts Neil Armstrong, followed by Buzz Aldrin, July 20, 1969.

Loan’s exploits are recounted by long-time Marco resident Tom Williams in “Surrounded by Thunder,” his historical narrative about the golden age of America’s space program. Williams’ book is fact, written from several years of interviews with Loan, but it is written with all the excitement of a fiction thriller.

The DAR members heard about the US vs. USSR race to dominate space in the late 1950s and 1960s. NASA was formed after the successful launch of America’s first satellite. That’s when Loan worked with Werner von Braun and other leading German engineers to send volatile rockets into space, eventually one carrying a human. Williams and Loan told the group about the intense era of experimentation, the 12 years between the launch of the Russian Sputnik and American boots on the moon.

Williams is a familiar figure around Marco, especially on the beach, where he is in his fourth decade working at the Marco Island Marriott as a captain, taking guests on sailing and shelling tours in the Gulf and the 10,000 Islands.

Williams also is an accomplished writer. His first novel, “Lost and Found,” which takes place partly on Marco and Goodland, was ranked among the top five books one “must take on vacation” by Sport Diver magazine in 2013.

Williams’ “Surrounded by Thunder” won the Gold Medal in the 2014 Florida Book Awards non-fiction category. Tom Williams’ books are available at Sunshine Books on Marco or at Amazon.com.

The Marco Island Chapter of the DAR holds its luncheon meetings at 10:30 AM on the third Thursday of the month. It welcomes potential members and members from other chapters who are living in or visiting the area. For further information, please call Karen Lombardi at 239-394-0028.