The Island of Public Opinion Surveys 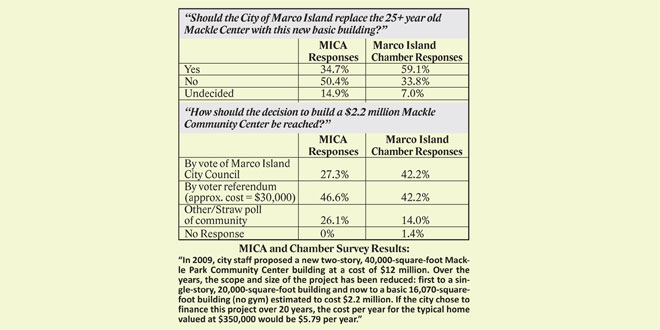 The survey was distributed by a number of local organizations, including Marco Island Civic Association, the Marco Island Chamber of Commerce and Bill McMullan’s ‘EyeOnMarco‘ newsletter. MICA surveyed its 7,700 member households, and received roughly 3,000 responses, a 39 percent response rate. Through its Constant Contact survey tool, the chamber sent the survey to its 706 primary email contacts with 71 respondents, a 10 percent response rate.

The survey led with a brief historical synopsis of the project: “In 2009, city staff proposed a new two-story, 40,000-square-foot Mackle Park Community Center building at a cost of $12 million. Over the years, the scope and size of the project has been reduced: first to a single-story, 20,000-square-foot building and now to a basic 16,070-square-foot building (no gym) estimated to cost $2.2 million. If the city chose to finance this project over 20 years, the cost per year for the typical home valued at $350,000 would be $5.79 per year.”

It asked two questions crafted by City Councilor Ken Honecker and City Manager Dr. Jim Riviere. The first was a yes or no question, asking: “Should the City of Marco Island replace the 25+ year old Mackle Center with this new basic building?” The second, a multiple-choice question asked: “How should the decision to build a $2.2 million Mackle Community Center be reached?” The answers included a by vote of the Marco Island City Council; a voter referendum (at the approximate cost of $30,000); and a straw poll of the community.

Now for the tricky part: deciphering the results. Of the chamber members who responded, 59.1 percent answered “yes,” the city should replace the current Mackle Park Community Center with the latest project rendition, while 50.4 percent of MICA’s member households voted “no.”

Chamber members straddled the fence on the how-should-the-decision-be-reached questions with 42.2 percent liking a city council vote and another 42.2 percent calling for a voter referendum. By a vote of 46.6 percent, MICA’s members felt the decision should be made by a voter referendum. In contrast, 91.2 % of an unknown sample of Marco Island Property Owners members answered yes to the organization’s February survey question “Should the Mackle Park renovation/expansion be placed on a referendum?”.

Confused yet? “It’s very easy to identify all the good reasons for surveys and just as many reasons why surveys won’t tell you what you are looking for,” says Bill McMullan.

According to experts in the world of public opinion polls and surveys, these types of public opinion surveys are fraught with problems. Take Dr. Michael Binder, the faculty director of the University of North Florida’s Public Opinion Research Lab. He says community-based public opinion polls are problematic on a whole host of levels, including gathering a solid random sample of the targeted survey group, the use of multipliers to beef up response numbers and the wording of survey questions.

McMullan agrees, and he notes that on Marco Island getting a good sample can be even more difficult: “The difficulty comes in reaching folks who are part-timers, snowbirds, retirees, etc. that for many reasons either do not stay current on the happenings on Marco Island, do not want to be bothered by the day-to-day or do not feel there voice is important in the scheme of things.”

Frames, or how survey questions are worded, can be sticky as well. “There is some science and some art to question creation,” Binder states. “The best surveyors use questions that have been field tested extensively and are established — even unique questions like spending for community centers can have consistent structure and terminology.

“I know that’s not exactly a ‘do x, y and z,’ and, poof, you’ve got a good survey, but good surveys are difficult to do. That’s why the best ones are so damn expensive,” he adds.