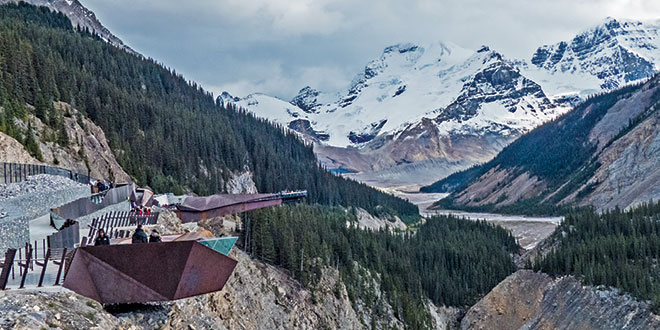 The Glacier Skywalk juts out over the Sunwapta Canyon.

The Icefields Parkway in Alberta, Canada, also known as Highway 93, is 144 miles of natural beauty, wildlife, tourist attractions, and, in high season (July, August), a moving parade of cars, RVs, and tour buses traversing this double lane road. Paralleling the Continental Divide, it runs from Lake Louise north to Japer and passes through both Banff and Jasper National Parks. We traveled its length twice, the first time, enjoying all it had to offer, took more than nine hours. The second, using it merely as a route from one location to another, took considerably less time, but was just as beautiful.

Imagine miles and miles of snow capped peaks, deep valleys, picturesque lakes, glaciers, ice fields, waterfalls of all shapes and sizes, wildlife, and a few manmade tourist attractions. There are thirteen viewpoints along the way with parking, as well as parking at some trail heads.

The lakes feature waters that range almost the entire color spectrum of blue and green; turquoise, emerald, aquamarine, rich robin’s egg blue. Some appeared deep and dark, others translucent. Traveling from Lake Louise, the first one encountered is Herbert Lake, with its reflection of Mt. Temple. Next is Hector Lake, the largest natural lake in Banff National Park and from which there are views across to the Crowfoot Glacier. Probably the two most popular lakes are Bow and Peyto. At Peyto Lake, known for its blue, blue water, there is a short, paved trail to a wooden viewing deck overlooking 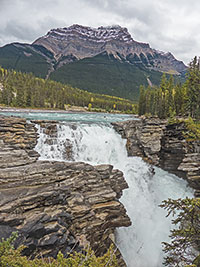 One of the waterfalls at Athabasca Falls.

the lake and valley. From there, intrepid walkers can continue on to Bow Summit Lookout, a two and a half hour hike. Other lakes along the way have names like Helen, Waterfowl, Honeymoon, Osprey. Many of the lakes allow fishing with a National Parks fishing license.

The waterfalls have evocative names like Bridal Veil, Tangle, and Weeping Wall; the latter being a series of waterfalls cascading down a limestone cliff more than 300 feet. Sunwapta Falls is located in the Jasper National Park portion of the Parkway; its name is a First Nations word for turbulent water. With mountains as a background, and a footbridge to access its view, it is not very high, but certainly picturesque. The Athabasca Falls, just fifteen miles further north, to me, were the most impressive. At a location where the wide Athabasca River passes through a narrow gorge, they are a sequence of raging falls, whirlpools, and spraying water. That they flow over quartzite down into a deep limestone canyon pocked with potholes make them especially photogenic. There are trails and viewing platforms all along the falls. What these falls lack in height, they make up in force.

The Saskatchewan River Crossing Viewpoint, the site at which the fur traders of the early 1800s crossed the North Saskatchewan River on their travels, looks down to the Howse Pass National Historic Site. Three rivers converge at this location and the Viewpoint offers an expansive vista of the valley below and surrounding peaks. It is a

The blue water of Peyto Lake.

popular spot not only for the scenery, but also for the services at the Crossing Resort.

What this area is known and named for are its glaciers and accompanying ice fields. There are more than 100 glaciers along the parkway, six of them are major. Their names include Crowfoot, Angel, Dome, Saskatchewan, Columbia, and Athabasca. The most visited is the Athabasca and its accompanying Columbia Icefields. The Athabasca Glacier is within walking distance of the highway. The Columbia Icefield above the Athabasca Glacier at about 125 square miles and more than 1,000 feet deep in places is the largest in the Rockies. It is here where we encountered our first manmade attraction.

The Columbia Icefield Discovery Centre, a large and very busy building opposite the glacier has exhibits, services, and a Parks Canada office. At the centre, tickets can be purchased for the Columbia Icefield Glacier Adventure. Boarding specially built six giant wheeled vehicles called Ice Explorers, passengers are transported down to the middle of the icefield where they can disembark and explore the area with its ice masses, fissures, crevasses, melting water, and cold, cold temperatures. Yes, it was a very touristy thing to do, but how could we resist? The narration during the trip down was interesting, as was seeing the icefield up close. Did I mention it was cold?

The more adventuresome can book a guided three to four hour or all day walk onto the Athabasca Glacier. Those trips are only available from June through the beginning 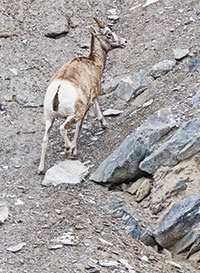 Bighorn sheep are frequently seen along the Icefields Parkway.

The less adventuresome can take a twenty minute (one way) trail to the foot of the glacier. Another trail, the Wilcox Pass, a moderate two to three hour hike, offers beautiful views above the glacier.

The Icefields Centre also has tickets for and transportation to the other manmade attraction along the parkway, the Glacier Skywalk. Opened to some controversy in 2014, it is a glass-floored walkway that juts out 115 feet from a cliff almost 1,000 feet above the Sunwapta Canyon. As you walk out to the viewing area, there are interpretive photos and signs about the geology, ecology, and biology of the area; audio guides, included in the price of the ticket, provide further information. Warned that the viewing platform is designed to shake, I wasn’t sure how I would feel about this attraction. I hate pedestrian suspension bridges because they wobble. But, I was fine with this U-shaped walkway although it did noticeably sway and the view was impressive.

The Columbia Icefield Glacier Adventure provides transportation to the middle of the icefield where its crevasses can be observed close up. Photos by Vickie Kelber

Travelers along the Icefields Parkway must have a Canadian National Parks Permit. There are four food stops along the way, at the Num-ti-Jah Lodge, The Crossing Resort, Columbia Icefield Centre, and Sunwapta Falls Resort. There are times when the restaurants at the Crossing and Icefield Centre are closed to the public as they are at maximum capacity with booked tour groups. We ate at the Icefields Centre buffet. It was busy, but quick, with a lot of fried food and an Asian theme.

All four of the above mentioned stops also offer accommodations, and there are additional sleeping options near Jasper. The Crossings has the only gas station along the highway and, as is to be expected, it is expensive. The Parkway is open all year, but the services are closed from mid October to mid April and sections of the road may close after a heavy snowfall. There is no cell phone reception along the highway. The smartphone app, GyPSy Guide for the Icefields Parkway can be downloaded and works off-line, thus not requiring a network connection; it has commentary for 80 sites along the route.