The House of Horrors- Part V Will It Ever End? 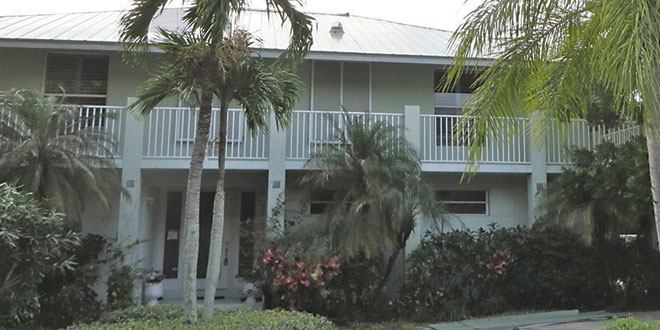 Photos by Carol GlassmanJanuary 1 – All but one panel of the new metal roof is in place.

As I approached my House of Horrors the first week of January, after being away for 16 days, the first thing I noticed was the absence of most of the metal panels on the lawn and a lovely new, almost-finished green metal roof. That looked promising. The roofer had said he didn’t need access to the house so at first I was pleased he had gone ahead and used his ladders. However, once in the house I realized his zealous workers had not only pried open the upper sliding doors to the verandah, but had left them open and created homes for more roof or palm rats than I could possibly imagine. The room was covered in wall-to-wall droppings. With disgust I tossed out all the upholstered pillows and anything else I was unable to fumigate. Even though they were the only people at the house while I was away, we all know the standard reaction, don’t we? “It wasn’t me.” All I can say is, it wasn’t me either and thank goodness I left the main doors to the house locked firmly, with security on.

The following week, the rest of the quartzite counters were removed from the kitchen. Nothing else happened the other four working days. In fact most of January was a write-off except for a worker showing up for an hour here or there. Even the roofer was scarce. His story was that he ran out of material and needed more to complete a panel. After it was delivered, it sat on the front lawn for several weeks. There seemed to be a shortage of workers in every trade.

Diana showed up with some samples of tile and we chose a backsplash for the kitchen — that took about 30 minutes.

After a big decision was made to replace all of the old cabinets instead of trying to match them, the rest of the kitchen was cleared out. On a Friday, workers replaced the damaged drywall and returned for an hour the following Monday to sand it. That took us to the end of January.

If you have ever lived in the cold north during winter months, you may remember how everything imitated the waterways: life slowed down and eventually froze solid, unmoving. That’s how this project began to feel: frozen in time. Even the dust bunnies just sat glaring at each other and me.

Not much happened at the beginning of the month but on February 12th, following a series of phone calls, roofers finally showed up to reposition the skylights inside the house. After my questioning, they discovered that two skylights had been covered with metal on the roof and would have to be cut out and exposed. By the way, they came without the necessary hardware to do the original job of repositioning and hanging the skylight tubes inside the house. My reaction was to jump in the car, go out for lunch and then a movie after informing them (with dragon-like flames shooting out of my nostrils) that on the following Monday I expected a painter and the tile men inside the house. They promised sincerely they would return to do the work and not be in anyone’s way. They were right about the second part — they weren’t in anyone’s way because they didn’t show up. Darn that caller ID — they didn’t answer the phone, either. Well two can play that game: I just turned off my caller ID when I called them on my cell phone and got a rapid response.

On Monday, February 22 Diego a painter arrived and began repairing and painting all the chipped woodwork around the doors, and prepping several damaged ceilings. It was a pleasure to have such an efficient, clean worker in the house finally, someone who took the time to let me know when he was arriving 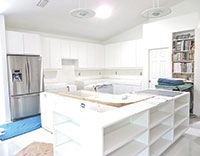 I had chosen such a pristine white trim that everything else looked old and dirty. I decided to contract with this painter to paint everything to match, while agreeing to paint all the 20 doors myself, setting myself a goal of several sets of doors per day. I needed the exercise.

I was told the new kitchen cabinets would arrive on Monday, March 14th. I hoped they would send a proper electrician to check out all the outlets that had been flooded, and a plumber to reset the kitchen piping. I noticed they had created a slow leak in one of the commodes as well, when they reconnected it.

After the painting was finished and the furniture replaced I decided to unpack approximately 20 cartons of china and crystal that belonged in the dining room cabinets. Without a kitchen sink, I had to settle for wiping each item thoroughly and dreaming of a future with soap and water. I didn’t need to rush, as on March 11 I was informed that the cabinets were held up by flooding on major highways and would not arrive until later in the week, possibly Thursday – St. Patrick’s Day. I hoped no more interfering leprechauns would appear.

Thursday dawned, and with it came a phone call from Diana affirming the cabinets were on their way and, incidentally, another payment was due. All right — I guess this is where the blackmail begins and I had to use that dirty cuss word “attorney” as I announced I was not paying anything until they reimbursed me for what they overcharged so many months ago. After a phone call to Steve, Diana emailed me a revised copy of the invoice. Was I grateful? No, not really, after all it was my money they had held on to for many months for no honest reason. It happened so speedily that all I felt was something tantamount to disgust: all along they knew very well that nephew Tony had messed around with my invoices, and they allowed me to beg for my own money.

Lo and behold, the cabinets arrived. The delivery people were not too happy about bringing them up stairs or with the lack of space to store them, but after eight months the only sympathetic response I could summon was, “It is what it is!” A plumber arrived at the same time and performed his magic on pipe fittings which looked as if they had never been sealed off properly when the old cabinets were removed.

After this flurry of activity died down, a new face appeared at my door, informing me that my worries were over. Fred said he knew all about the history of the job (maybe he reads the Coastal Breeze News?) and as soon as he familiarized himself with the details he would be overseeing the installation. By this time I knew better than to set off fireworks and crack open the Pinot Grigio, or maybe even step it up a notch to Prosecco for this grand announcement, so I merely went for yet another pre-made salad to balance on my knee and pretended I was enjoying lunch. Fred disappeared. Perhaps he had to meditate an appropriate amount of time before beginning. Meanwhile, I was stuck in the house, planning where I could escape for a decent dinner.

I’m sure some people were well meaning when they offered to bring me lunch to share while I was confined to the house but I guess they either didn’t listen or just didn’t get it, until I asked them where they expected to dine. We have two seatings here, the bed and the bathroom. And in typical Marco Island fashion the offers usually came from people into whose homes, in over 20 years, my little toe had never progressed. Can you explain that?

Historically, not much happens on a construction job around here on Friday, or most other days either when I really allowed myself to think about it — giving credence to the expression, “Time stood still”.

I’ll have to invite you to tune in to the next issue for another stirring chapter on life in a House of Horrors. If you can stand it.