The House of Horrors – Part IV 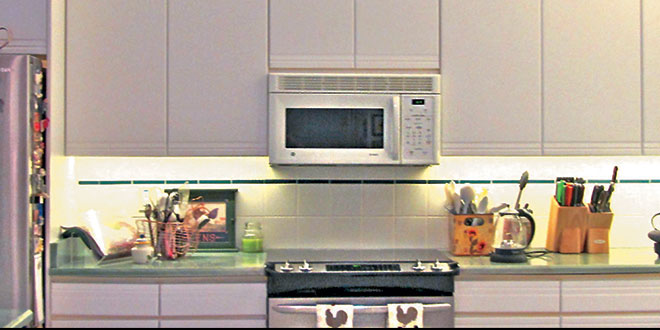 Photos by Carol GassmanThis is how the kitchen used to look.

Not much happened the first week after Uncle Steve and his assistant Diana took over renovating and repairing the flood-damaged house, but at least I received frequent calls and was kept in the loop as the insurance company approved various steps.

At the end of the second week, a team from the company that had installed my precious unique quartzite counters appeared. I was a little nervous when the two men didn’t seem to know why they were sent and even more nervous when they continually commented on how heavy the counters looked. After a few phone calls to their home base they actually began to work, torching the seams and lifting all the pieces carefully, wheeling them out and setting them all on the lanai floor. My nerves forced me to leave the room when they tackled the final piece which was a little less than nine feet long and must have weighed many hundreds of pounds. Two men lifted out what it had taken six men to install. They removed half of the counters, as allowed by insurance.

The following Monday was reserved for the mold remediator. At last I would see some action, I thought, and relieve some fears about the dangers of mold in the house.

Justin arrived and did a cursory swing around the kitchen to reacquaint himself with the problems. He seemed interested in two jugs of some kind of spray that the original unreliable contractor Tony had left behind, and asked me where I got them. It seems he has the sole franchise for using that chemical in this area and Tony must have ‘lifted’ them from his truck in order to have it. Pardon me if I didn’t show surprise at this.

Justin disappeared, saying he was going to the hardware store for supplies, and that was the last I saw of him that day. He called after a few hours to say he had been trying to get in touch with the project manager Diana for some details on the roof replacement. It seems he had second thoughts about attacking the mold while there was still the chance of a leak. I didn’t I blame him as up to that point everything seemed to have been done bassackwards and in reverse. Just another wrinkle in the already over-creased fabric of the house restoration. By the time I talked to Diana myself, I learned that the roofer (what a shock) didn’t have the permit yet and would not begin work before the following week, which would make it November. Before I did something foolish or committed myself to the nearest funny farm, I decided to get the heck out of the house and enjoy some serious retail therapy and then allow someone to serve me a luxurious hot meal. There are days when you don’t see the light at the end of the tunnel, and then there are days when you cannot even see the tunnel, and I’m afraid that’s where I seemed to be residing.

On November 10, it had been raining lightly in Naples, and as I turned off Collier Blvd. onto the side streets of Marco Island, I found myself driving through several inches of water from overflowing swales and storm sewers. When I got home, the ever-present beach towel in the kitchen was only half damp from the torrential rainstorm I seemed to have missed. (Did I mention that with all the washing and drying of heavy towels I blew out my dryer, and finally had to purchase 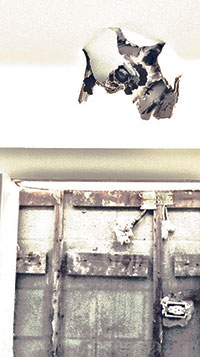 This is where the worst of the leak occurred – the same wall and ceiling.

a new machine?) Marco Island received 2.5 inches of rain. I could feel myself wearing thin and about to have another meltdown. Before that happened I sat down and had a wee chat with myself.

“Self,” I said, “I think you are reacting to having absolutely no control over this pathetic situation. Why don’t you make a little plan. If it doesn’t succeed, at least you will know you have tried and it might keep your mind off yourself for a while. You have nothing to lose.”

Good idea. I loaded my iPad with the photos I had been taking on almost a daily basis, of the tumult in which I was living. With this in hand, I went to the office of Ron the Roofer, introduced myself, explained how I had been victimized by an unscrupulous contractor and threw myself on his mercy. I became the “next job in line”. His office also gave me some excellent advice: instead of lining the contractor’s pockets with excess silver, why not deal directly with the roofing company? Hmm, why not indeed! (After all, still fresh in my mind was the crooked contractor’s attempt to pad my roofing invoice with a $12,000 bonus for himself.) In fact, they went a step further and said if I wanted the name of a good honest Christian contractor they could recommend one. Well, having just experienced Tony-the-Pastor-Contractor, I declined that offer and said (tongue in cheek) I’d settle for an honest atheist.

Early one morning a week later, those were not reindeer I heard on my roof, but the sounds of a crew of real live men ripping up tiles and tossing them into the two dumpsters that had appeared in my driveway. It seems as if a roof is done in several stages; first of all, it is ‘dried in’ – or all the old materials are removed and the new waterproof roof base is built. At least I then knew from a professional where the leak was coming from, the weak spots in the roof, and that there would be no more water in the house.

The same morning, Diana appeared by appointment with photos of my new kitchen cabinets, and a proposed delivery date of 6 – 8 weeks in the future.

Then the mold remediator Justin called suggesting he was available to demolish the kitchen and treat the walls for mold during the next few days — talk about ‘feast or famine’!

I spent a lot of November waiting. The roofer was as good as his word, and within days the old roof was torn off and ‘dried in’. I was assured this would keep the house dry until the metal was put on. He detected the worst leak and in total added five sheets of plywood in different areas of the roof that were also rotting.

Justin’s crew arrived one day, not at 9 a.m. as promised, not at noon, or 3 p.m., but at 5. Fortunately they were not thrown out by the Association but worked until 9 p.m. to remove all the mildewed cabinets and dry wall right down to the cement block walls. Now I also had a large hole in the ceiling where the worst of the leak had occurred.

November came and went — and December arrived. There were these frustrating, huge gaps of time when nothing happened. I discovered quite by accident that the original order for the roof metal as given by Tony, was the wrong color. Another time -consuming glitch and waiting for a dry day for 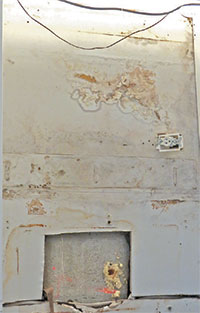 Same wall – mold and mildew damage behind cabinets and before affected drywall was removed. Imagine living with this for a total of half a year!

installation. In addition to all the grit and grime and confusion, all seven telescopic skylights fell into the house and would have to be re-installed when the roof was done. The roofer sent a couple of young men to cover the holes inside the house with plastic when the humidity became unbearable.

After another meeting with Diana, the insurance adjuster and his supervisor, and a lot of nodding and smiling, everyone was (again) sure of how to proceed and when. There was no doubt in my mind that the insurance company had always had my best interests at heart. There was also no doubt in my mind that Diana was trying to ‘sell’ me a completely new kitchen for which I would have to pay at least partially. I realized they would not make much of a profit here by the time they paid for all the broken and damaged property and the mistakes, but that was not my problem.

I lost count, but I think I received at least four requests for payment by the original roofing company, for the work I did not authorize, putting a tarp on the roof. Every time I spoke to Diana and Steve about it, they said they would look after it (neglected to say in what year), and I should stay ‘out of that loop’. It seemed pretty clear to me that I didn’t authorize the work, and in fact, was told by Tony that this company “just happened to come along and offer their help” as they were already working in the area. However, I didn’t want to see a company cheated out of a legitimate claim.

Meanwhile, I personally suffered with a painful bout of diverticulitis, wheezing, sky-rocketing blood pressure, and then seemed to have pulled all the muscles in my lower stomach by a simple sneeze. Would you say I had stress-related problems?

Following instructions from the adjuster, Diana arrived with one workman and took off two of the remaining cabinets from the back wall; we were satisfied there was no mold there, so now the rebuilding of the kitchen could begin. First of all they would have to re-do some of the floor and add tile to the areas under the counters, and remove the rest of the quartzite counters to lift them, as the dishwasher and stove would no longer fit since they raised the floor with a mud set for the porcelain tiles.

At the end of December, a load of lovely green metal roofing was dropped on my front lawn. As for me, I just hopped on a ship, as I had planned 12 months previously, and sailed off into the sunset for 16 days in South America. I was sure nothing would be accomplished during the holiday season so I locked the door and instructed everyone that I expected a veritable hive of activity on my return the first week of January. I really didn’t care where the ship went and South America seemed as good as any other place. I filled the iPad full of trashy reading, made use of all the ship’s amenities and never got off at any port. I had hot gourmet meals, gourmet coffee, and dust-free air to breathe. As far as I knew, no one lied or obfuscated for a full two weeks. I did my best to drive thoughts of the House of Horrors out of my head, planning to return home well-rested and ready to carry on, wondering what I would find.

Part V of this stirring, action-packed tale in the next edition.