The House of Horrors – Part II 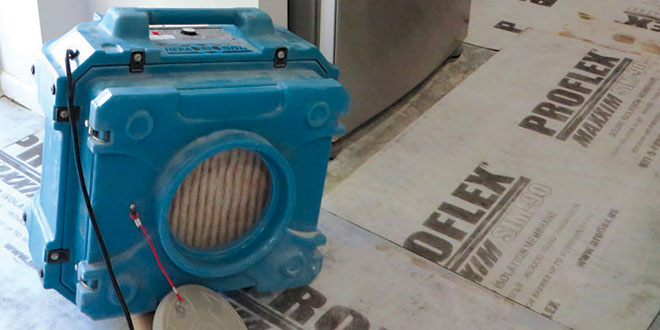 This is one of the ‘miraculous’ air scrubbers, said to remove dangerous and toxic mold and other air-borne particulates. Running them 24/7 as recommended guaranteed to render you deaf. PHOTO BY CAROL GLASSMAN

“Listen my children and you shall hear,” NOT the midnight story you may be expecting, but the second, hair-pulling installment of ‘Homeowner Beware’ or how not to choose a contractor and why you should trust no one who tells you, “Don’t worry!”

Facing possible replacement of a roof, a house full of floor tiles, and a complete kitchen, I awaited the verdict when the contractor Tony agreed to meet with my insurance company.

The insurance adjuster John and his area manager Tom met with Tony on August 11, and the three of them seemed to have a plan. Of course my plan was to get a new roof as soon as possible and Tony said he was working on it, that most of the roofers he would recommend were quite busy but he was lining them up to get quotes. He repeatedly urged me not to worry about it. I gave him a deposit for the floor which he seemed eager to begin, although the kitchen was still very wet, especially when it rained (a lot).

On August 18th, demolition derby began in the house with a dumpster in the driveway and a crew jackhammering the tiles that had not already gone swimming off the floor. There was very fine dust and rubble everywhere. I had done my best to pack away china and crystal but the workers still managed to push a piece of tall furniture into a hand-blown glass pendant fixture that could not be replaced, smash the glass in two pictures, break the wine rack, and pull the top off a lovely walnut games table.

“Don’t worry,” the foreman said, “we’ll repair or replace it.”

“Don’t worry” seemed to be the company logo and mantra.

The same day, Tony appeared and said he had contracted with a company to do the roof and asked for a deposit, which I gave him.

Every time it rained, and that was almost every day, I had a flood in the kitchen so the workers finally decided to put a tarp on the roof. The first one blew off after a few days.

After one month had passed, I was having meltdowns, asking almost daily when the roof replacement was going to begin as I had given Tony a deposit August 18th. I kept getting excuses that the roofing companies were too busy and had such large backlogs they could not even come to do an estimate.

All of a sudden it was the first week of October (my, doesn’t time fly when you are having fun) and we heard that Hurricane Joaquin was headed straight at us. By then the tile setters were almost finished with the floor, leaving the wet kitchen area to be done last.

The dumpster was removed in a rush to prepare for high winds.

I saw strange men helping the workers fasten a tarp to the roof, and Tony and the foreman told me they were from a local roofing company that was working in the community, had seen them having difficulties and had offered to help. I had been collecting names of roofers recommended by the city and it happened that this was one of them — we’ll call it Teddy’s Roofing. I strongly suggested to Tony that he give the job to Teddy since he had been so kind and helpful.

Hurricane Joaquin gave us a break but left me with the usual indoor flood running down the wall.

A few days later, Tony said he had written a contract and Teddy appeared with samples of metal for the roof, since I had decided I had enough of tile. I felt we were finally getting somewhere. The floor was finished, more or less, but nothing else was happening. Days went by while I sat around and waited for promised roof workers who never appeared. Tony rarely showed up and did not reply to messages or e-mails. Whenever I staged a meltdown, he sent two of his foremen to ‘hold my hand’ and assure me all was going according to plan — I was just not sure what the plan was and whenever I asked for specifics I got vague replies. In the meantime, I was living in a disaster zone: no kitchen; suffering with a sinus infection, no doubt from the dust and mold. One day Tony showed up with two air scrubbers which he told me ran at a cost of $500 per day each, to “remove mold and airborne particulates”. I wasn’t sure he knew what that meant.

I began to have some serious doubts about Tony and his honesty and ability. Not only was he telling me not to worry about anything, but it also became clear that he wasn’t concerned either, and frankly, I wondered if he knew what the heck he was doing. I became even more suspicious and nervous when he told me not to talk to my insurance adjuster unless he was present because I might “say something that the adjuster would use to turn against” me.

This is NOT a colorful piece of modern art. This is the back of a pure white kitchen cabinet that has been harrying mold for a few months. It smelled the way it looked. SUBMITTED PHOTO

they have always been helpful and caring. I pay them – they work for me. One day they called and asked me to tell Tony to call them. I relayed the message several times. Then one afternoon I got an e-mail from them saying they had been trying to contact Tony “for several weeks” but he wasn’t replying to phone calls, text messages, faxes or e-mails — is everything all right? I made sure they knew that I had given him the message two weeks previously, and then chased him down, told him to call immediately, and that if he wanted to be stupid and rude to leave me out of it. Little did I know, at this time, that he had never checked with them ahead of time, as he should have, before doing any of the work.

A workman finally showed up and pulled one of the white kitchen cabinets off the wall. The stench of mildew and mold nearly knocked us over, and the back of the cabinet looked like a modern art painting with splashes of colored mold. What else can I expect to find behind the other cabinets?

During this time I began to harass Tony as he would tell me things that I knew were not true, such as the roofer had the permit when I knew he didn’t because I had not signed a letter of commencement. I was becoming increasingly nervous and had to stage dramatic scenes to get any action. When I convinced him I was sick from mold and began to use words like “negligence” and “attorney”, there would be a flutter of activity.

Then I got the good news! Hallelujah! Tony was coming with the roofer to discuss how and when to proceed on Wednesday, I believe it was October 14, and three different mold and mildew remediation companies showed up in rapid succession to give estimates and ascertain just how bad the damage was. Maybe the squeaky wheel theory worked after all! Each mold expert said the same thing: the mold was evident but “not yet toxic”, and with the protection of a tarp on the roof, the kitchen should be sealed off from the rest of the house and demolished as soon as possible to give it a chance to dry out. This way they could ascertain just how much damage there was behind the cabinets and what had to be rebuilt. I had been begging Tony to do this for two months. He promised to be at the house with one of the remediation companies on Friday, October 16 at 9 a.m. to oversee this work. Perhaps he went to your house by mistake, because he certainly didn’t show up here.

I had been living in ruins: dust and dirt from the tile removal and replacement with promises of a preliminary cleaning crew that never arrived; smelly mold/mildew; moving from room to room to stay out of the way; no kitchen to speak of — only the refrigerator running; no access to preparing food; no access to closets, clothing, or laundry.

When Tony arrived on October 14, someone was missing: the roofer. He said Teddy refused to work here. He tried to tell me Teddy’s company had lost a bid with them the previous year and didn’t want to work with his company. I was stunned – we wasted all this time and now nothing? His stories and excuses about Teddy’s Roofing made no sense to me, after all, when he had agreed to do the roof, brought me samples, he knew exactly with whom he was dealing.

Tony assured me he had a bid from one other company I had recommended, for the same price, and they would begin by the first week of November. Did I have a choice? I decided I would look into Teddy’s Roofing for myself at a later date. Needless to say, another week was a total loss: no remediators, no roof.

Now I began to question Tony daily about the new roofer Sam and permits, which he said he didn’t need because he had the paperwork from Teddy’s company. I knew this was not true (or even legal) even when he said Sam already had the permits. This time I made a few phone calls myself and confronted him with the lies. Tony was never wrong: he would barefaced lie and just carry on as if I must have misunderstood him. I am no longer blonde and “Stupid” is not tattooed on my forehead. I really should have booted him off the job immediately but at that stage, I was terrified I would lose this roofer as well and be right back where I started. However, things rapidly came to a head. (Believe it or not, this is a shortened version of the story.) Weary, worn down, and lacking patience — I had canceled my entire life to sit home every day and wait for things that never happened — several straws broke this camel’s back.

Part III of House of Horrors will continue the saga — a one-woman trial of patience and endurance.