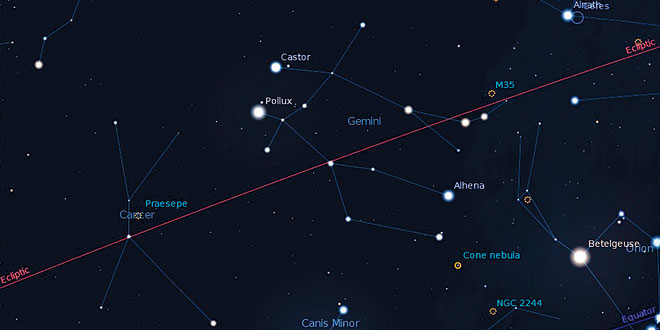 The title does not refer to the Olson twins, but the constellation Gemini is now at its zenith. As it is usually drawn in modern times, the constellation resembles two stick-figures holding hands; it is really quite easy to pick out once you locate Castor and Pollux. Pollux is the brighter of the two stars, but for some reason Bayer gave Castor the Alpha designation in his famous old catalog, while Pollux got the Beta designation. There has been some speculation over the centuries that either Castor has faded or Pollux has brightened since the early 17th century, but the most probable explanation is that Bayer was following tradition. In ancient mythology the twins are invariably referred to as “Castor and Pollux,” not vice versa, so Bayer went for the Alpha – Beta solution.

Just below Gemini is the excessively faint constellation of Cancer, the crab. Cancer has the odd distinction of having a Messier object in it brighter than any star of the constellation. Praesepe the Beehive cluster (M44) spreads out over an area three times that of the full Moon and is the perfect object to investigate with your binoculars. It’s too large to be seen in its entirety with a telescope and too faint to examine in detail with your naked eye.

Alas, the comet known as C/2011 L4 (PANSTARRS), is going to be a couple of magnitudes fainter than originally predicted. This is not an unexpected event as first-time comets often fizzle. Still, it should peak at about +3 magnitude which is brighter than any comet visible in the northern hemisphere for some years. Almost certainly you will require binoculars for the best view; however since the comet dives deeply into the Sun’s grasp anything could happen when it emerges. Next issue’s column will concentrate on comets in general and Comet PANSTARRS in particular, along with viewing instructions. The action begins on March 10th!