The Gulf Stream: A Migratory Highway 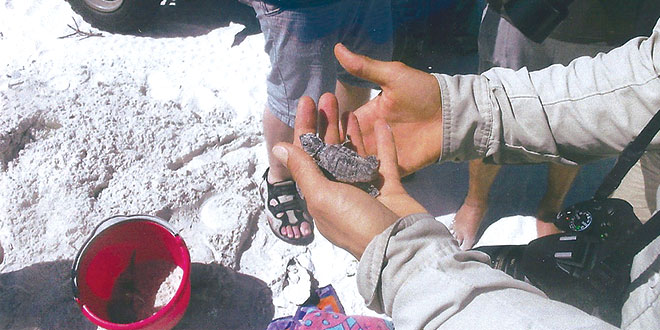 A newborn loggerhead, less than 2-inches long, gets ahead start towards the Gulf Stream current that will take it thousands of miles before returning to Marco Island 20-plus years from now. PHOTO BY BOB MCCONVILLE

Over the next few months, there will be a lot of attention given to the loggerhead turtles that nest on our local beaches. Not so much fuss will be made once the eggs have hatched, but many people are very aware of the absolutely magnificent, nearly impossible journey that these youngsters take. It is nothing short of a miracle.

Some of them will catch the Gulf Stream current just off our shoreline, grab a transfer into the Atlantic Ocean and continue up the coastline until they turn east toward Europe and Africa. But they are not alone. Some scientists estimate the number of marine species utilizing this swift flowing highway to be in the thousands. It is truly one of nature’s major expressways.

The Gulf Stream is a powerful current in the Atlantic Ocean. It starts in the Gulf of Mexico and flows into the Atlantic at the tip of Florida, accelerating along the eastern coastline of the U.S. and Newfoundland. It will then turn east towards Europe and continue down the African coast.

It is part of the North Atlantic Subtropical Gyre, one of five major ocean gyres on the planet. A gyre is a large system of circular currents and powerful winds.

This current was first mentioned by Ponce de Leon on April 22, 1513, and described in one of his voyage logs. He stated that, even though his crew had favorable winds for their sail, the powerful water allowed them no progress.

In 1519, Anton de Alaminos set sail for Spain from Vera Cruz, Mexico, using the Gulf Stream by following the Florida coastline northward until the currents turned him eastward towards Europe. He was a chief pilot for Ponce de Leon and also sailed on Christoph Columbus’ last voyage. He had experience on the open seas and was the first to take advantage of these currents.

Another famous historical figure who showed a keen interest in the North Atlantic Ocean circulation patterns was Benjamin Franklin. As a deputy postmaster of the British American colonies, he was looking for a way to streamline communications between the colonies and England, after receiving numerous complaints regarding overseas mail delivery.

During a 1768 visit to Englalnd, Franklin discovered that it took British

These savvy merchant ship captains tracked whale behavior, measurement of the water’s temperature, the speed of bubbles on the water surface and changes in the water’s color to follow the speedier route. Benjamin Franklin worked with Folger and several ship captains to chart the Gulf Stream, giving it the name it still is known by today.

Franklin’s Gulf Stream chart was published in England in 1770, where it was mainly ignored, and subsequent versions were printed in France in 1778 and in the U.S. in 1786. It would be years before the British finally took Franklin’s advice, shaving two weeks off the sailing time between England and the U.S. — a major stepping stone for better trade relations.

Anton de Alaminos realized that by working with the water flow, even though it was a longer route, he could save time to reach his destinations. Folger tracked whale behavior that led Franklin to determine the path of the Gulf Stream. Two hundred years later, we watch loggerhead turtles utilize this highway, and we are learning that it is also being used by migrating sharks, marlin, tuna and many more marine species that follow food sources, such as plankton and bait fish.

It seems endless, but the Gulf Stream has a beginning point and an end for many species. It has entry points and exits as well. Trade winds off the coast of Africa cause a warm cycle of water that eventually winds through the North Atlantic creating a merry-go-round for us to enjoy. There is an order to things on this earth, and this current is an important one. It’s another major stepping stone in the cycle of life. We should understand and embrace another one of Mother Nature’s wonders.