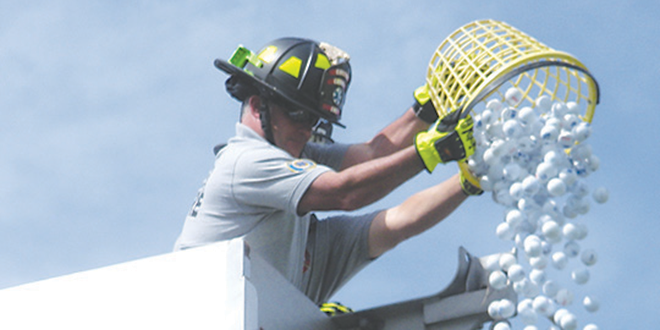 Both Eugenio Cardenas and the Marco Island Academy came away victorious on a recent Saturday afternoon at Winterberry Park. Cardenas, president of the Sunrise Rotary Club of Marco Island, was the big winner at MIA’s inaugural Golf Ball Drop fundraiser, capturing the $1,000 grand prize, which he donated right back to the school. The Golf Ball Drop involved baskets of the spheroids being poured from a perch about 60 feet in the air provided by an extendable boom-truck from the city’s FireRescue Department. Each numbered ball was purchased by entrants – $5 for one ball, $20 for five. There were four preliminary drops, prior to the $1,000 grand finale, and for each, the winning ball was the one that landed closest to 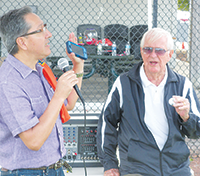 the hole below the boom.

Each preliminary round winner received $100 and only the balls they purchased were included in the grand-prize round. Aside from Cardenas, the other $100 winners were Pat Power, Amy Bozicnik and for the third preliminary drop, the prize was split in two when the golf balls of Kent Sterling and Tommy Racknor both landed in the hole. The festivities included stands set up and operated by the charter high school’s clubs that offered food and drinks, children’s games and more. The event was organized by the school’s Interact Club, which “is a leadership development program for Rotary (clubs) where we reach out to high school students in hopes of inspiring them to public service and to engage the community on 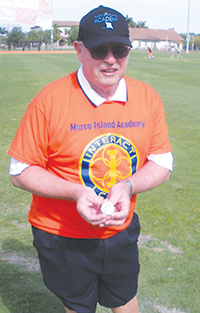 a give-back basis,” said Natalia Armstrong, Interact Club coordinator for the Sunrise Rotary Club. “What we’re really hoping is to develop them into leaders in the community and hopefully, Rotarians.

Armstrong said that despite the fact the first-year event was lightly attended, it was still a success because $5,200 was raised from sales of 1,300 golf balls. She said the proceeds will be used to purchase academic testing equipment and football uniforms, and “because every club participated, every club will get a slice of the money.” Jane Watt, MIA’s founder and chairman of the board, thanked the Sunrise Rotary Club and the Marco Island Fire-Rescue Department for their parts in making the event a reality. “This is huge for our school,” Watt added. “This really, really helps us out.”