The Glories of Sagittarius 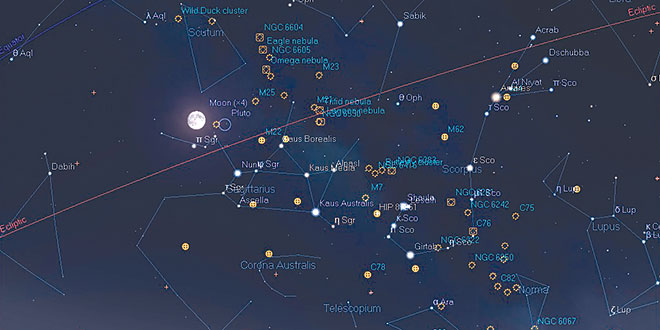 Last column, we gave only a scant glance at this most interesting spot in the sky, so with your indulgence we shall return to it.

First notice the nearly full Moon in the sky — how could you miss it? Tonight, it sits quite low in the sky and will not rise much higher. This is because the Moon moves along the ecliptic, and the ecliptic itself is rather tilted, low in the summer sky and high in the winter.

Why does the Moon follow the ecliptic at all? The major planets must as Solar System dynamics constrain them to a narrow band on either side of the ecliptic, but no such constraint should apply to the Moon. Orbits of other planets’ satellites lie on their primaries equator with a few minor exceptions, but not the Moon. It is a mystery, although presumably it has to do with how the Moon was formed.

The Moon sits in Sagittarius this evening, but you may wish to wait a couple of nights until the Moon is out of the way so you can view the constellation more easily. Can you make out the teapot shape embedded in the constellation? It is an unmistakable asterism once you see it for the first time.

When I was a boy I looked at Sagittarius for hours and never saw it as the map I was using omitted it, but it was instantly obvious once someone pointed it out to me. On a really dark night, the star clouds in Sagittarius seem to hover above the teapot spout like steam. The ancient Greeks, having no known experience with teapots, saw instead a centaur shooting a bow with the arrow aimed at the nearby Scorpius.

Sagittarius is almost literally stuffed with fascinating binocular objects. Rather than find a specific one, take a few minutes and scan the Milky Way in a systematic manner. In 10 minutes, you will find 10 amazing objects.

When you have a moment, have a look in Scorpius and locate the star Dschubba. In 2000, after being well behaved for all of recorded history, it suddenly became a variable star only slightly less bright than Antares. Dschubba has dimmed since then, but it remains brighter than it was before 2000. Another outburst may happen at any time.