The Future of Social Security: Safe, Stable, Secure or Uncertain? 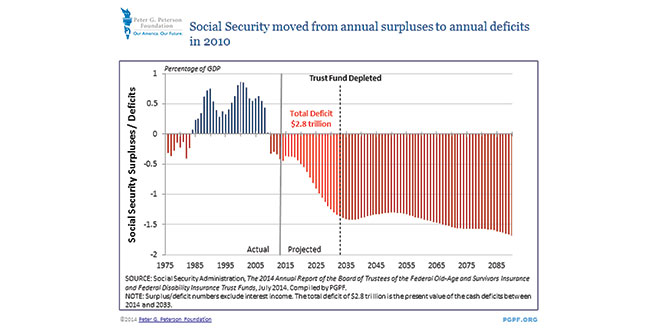 Question: I’m curious, since I’m planning to retire soon, what is the outlook for Social Security?

Answer: You’re in luck, on July 28, 2014, the Social Security Trustees released their annual report providing insight to their financial condition. This is national Social Security awareness week so you’re in good company. Plenty of retirees and pre-retirees are discussing their cash flow needs and income resources. Here are some highlights from the Trustees 2014 report (available at www.ssa.gov).

• The maximum annual Social Security benefit for someone retiring today at age 66 is $30,396.

• The average benefit received by retired individuals and married couples, respectively is $14,748-$23,928.

• Between 1965 and 2011, the U.S. population grew by 50 percent. During this same time, the number of people receiving Social Security disability benefits during this period grew 510 percent.

What is Social Security?

President Franklin Delano Roosevelt signed the Social Security Act on Aug. 14, 1935, which was designed to pay retirement benefits to workers. In 1939, survivor benefits were added with disability benefits appearing in 1956.

Ida May Fuller of Vermont was the very first recipient of a Social Security retirement benefit. Having paid $24.75 into the system, Ida retired in 1949 and received $22,888.92 in benefits. Ida retired at age 65 and lived until age 100.

There are two parts to Social Security: the familiar retirement income benefit, which is the Old Age and Survivors Insurance (OASI) program, and the Disability Insurance (DI) program, which is intended for disabled workers and their families. The combination of these two is OASDI. Payroll taxes are collected from workers to fund each component. Under Federal Law, Social Security can only invest these funds in securities issued or guaranteed by the Federal Government.

• If payroll income taxes alone won’t fully cover benefit payouts, the annual report states that payments will be covered until 2034 for OASI and 2016 for Disability Insurance.

• It is projected that the OASDI fund reserves will increase through 2019. By 2020, expenses will exceed total income and the U.S. Treasury will need to redeem trust fund asset reserves. If Congress doesn’t act before then, the combined trust fund reserves are depleted in 2033.

• When trust fund reserves are gone, incoming payroll tax revenue should cover 77 percent of scheduled benefits. This means that 20 years from now, if no changes are made, benefits could be 23 percent less than expected.

• Projections show that the DI Trust Fund reserve will be depleted in 2016, just two years from now. Legislative action is needed as soon as possible. Once the reserve is gone, income to the fund will only pay 81 percent of DI benefits.

Even if math isn’t your strong suit, it is clear to see that the future of this program is precarious. The program was designed when conditions were much different. Life expectancies have increased dramatically, and we’re drawing more out of the system than ever imagined. There are fewer workers paying into the system than ever before, and the rate of return on assets invested in the Trust funds is low (1.87 percent average during 2013). It is clearly important to have additional funds set aside for your retirement in addition to any anticipated Social Security payments you’ll receive.

Social Security plays a role in the lives of 59 million beneficiaries and 165 million covered workers and their families. Addressing problems now increases the likelihood that Social Security can continue to protect future generations. Here are a few suggestions our lawmakers are discussing:

• According to this year’s report, adding 2.83 percent to the current Social Security payroll tax, if done immediately and permanently, would address the revenue shortfall.

Recognize that your financial future is largely in your hands. You can take control by anticipating your cash flow needs and identifying potential income resources. Continue to follow the news for any new developments or proposed legislation to reform Social Security, understand your own benefits and what you’ll receive from Social Security based on current law. Save as much as possible for retirement.

The job of planning for retirement never ends, even when you’re retired. The decisions you make in the months and years leading up to retirement have considerable impact on your future. Get them right, and you could be one of those retirees who can honestly say they’re “living the dream!”

Information obtained from outside sources is believed to be accurate. This information is general in nature, it is not a complete statement of all information necessary for making an investment decision, and is not a recommendation or solicitation to buy or sell any particular investment. Investing involves risk and the possible loss of principal invested, investors may incur a profit or a loss. Opinions expressed herein are those of the author and subject to change at any time.