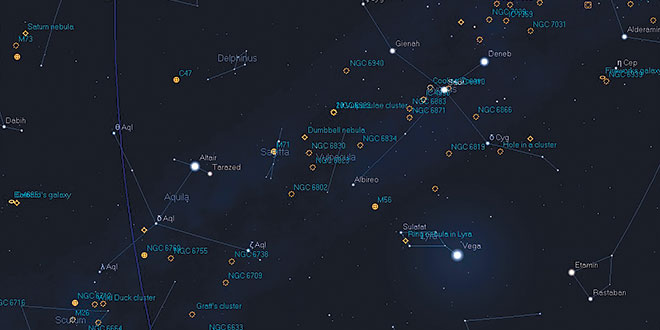 Starting with tonight’s chart, we are entering a period of several months where we have no bright planets available for viewing in the evening hours. This unfortunate situation will last through autumn and through much of the winter. We are just on the wrong side of the Solar System!

Jupiter is available in the east from 5 AM onwards, and Venus pops up just before the Sun does. But, who wants to get up that early? Jupiter does make it into the late evening hours in mid-December, but it’s February before a well-placed early evening appearance occurs.

We will return to the Summer Triangle area now in the west where the summertime Milky Way is still high in the sky, and it’s hard to miss our old friends Altair, Vega and Deneb. This general area is stuffed with star clusters and the occasional planetary nebula, typical when viewing through the thick part of the galactic disk. If the sky is reasonably free of light pollution, notice the dark lengthwise gash in the Milky Way running through Cygnus. Called the Great Rift, it’s not really a gap in the Milky Way but a giant cloud of dust placed between us and the more distant regions of the galactic disk. We see only the foreground stars with the naked eye.

Not far above the center of the chart tonight is the Dumbbell Nebula. The Dumbbell is a planetary nebula which is bright enough to see in your binoculars. Planetary nebulas actually have nothing at all to do with planets so it’s a terrible misnomer, but we are stuck with the name. When early telescope users first detected these nebulas, they appeared round and disk-like, much like a planet does, hence the name.

While most planetary nebulas do look round, some do not, and the Dumbbell Nebula is a perfect example of the other kind. As you might guess from the name, the nebula has the appearance of a hand weight in a small amateur telescope. Larger amateur telescopes reveal a shape more closely resembling a rectangle with a complex internal structure that your eye can’t quite follow. The nebula’s actual 3D structure is thought to be blimp-shaped, viewed from the side.

To find the Dumbbell Nebula, locate the star marking the arrows point in Sagitta and very slowly pan to the right with your binoculars; a tripod helps greatly. Although large for a planetary nebula, the Dumbbell will appear quite tiny in your trusty 9×50’s — a slightly elongated patch of fog. It’s modestly difficult to find so take your time.