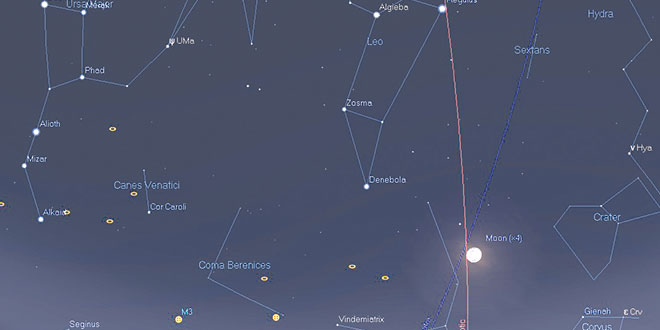 Looking Northeast, 9:00PM Mar 6. Even though the Moon looks huge when near the horizon you can still cover it up by a pinky finger held at arm’s length!SUBMITTED PHOTO

After setting a few months ago the Big Dipper has returned to the early evening sky. The Dipper of course is not a constellation but merely an asterism and makes up a portion of the rather large constellation of Ursa Major, the bear. It is an odd fact that roughly half of the world’s cultures regard this grouping of stars as a bear; after all it does not look much like a bear. One possible explanation is that this constellation’s identification as a bear is a shared cultural tradition springing from a common root. If true, this tradition can not be less than 15,000 years old for groups of Native Americans identify the group as a bear and North America was settled not less than 15 millennia ago.

Leo the Lion is well up now in the east; it’s very easy to find, just reverse the pointer stars on the Big Dipper and go roughly the same distance you would go to find Polaris in the opposite direction. Regulus is the brightest star in Leo and is one of the few bright stars on the ecliptic. In fact it is so close as to be occasionally covered up by the Moon; when this happens the event is known as an occultation. Regulus can also be occulted by planets on very rare occasions – the next time is by Venus in 2044. Being the brightest star in a constellation devoted to the king of beasts, Regulus tended to be associated with royalty in ancient times.

Two other nearby constellations are associated with royalty although it’s best to wait until the Moon is not in the sky to view them: Canes Venatici, the hunting dogs and Coma Berenices, Bernice’s hair. As the story goes, Queen Bernice of Egypt cut off all her golden tresses and donated them to the temple of Aphrodite as a sacrifice. (This was after the Greek conquest). The next morning the hair was gone – when summoned to the throne room the fast thinking High Priest claimed Aphrodite had placed the Queen’s hair among the stars. Thus saving his head and giving us a constellation at the same time.

Canes Venatici has the peculiar distinction of having one of the very few stars named after a human being – Cor Caroli, the “heart of Charles” in Latin. It’s named for King Charles I of England who lost his head in 1649. It has appeared on English star maps since 1673. While on the subject of star names be aware that there are fraudulent companies out on the internet which promise to name a star after you for a fee – don’t believe them!

Mr. Usher is president of the Everglades Astronomical Society, which meets the second Tuesday each month at 7 PM in the Norris Center at Cambier Park in Naples