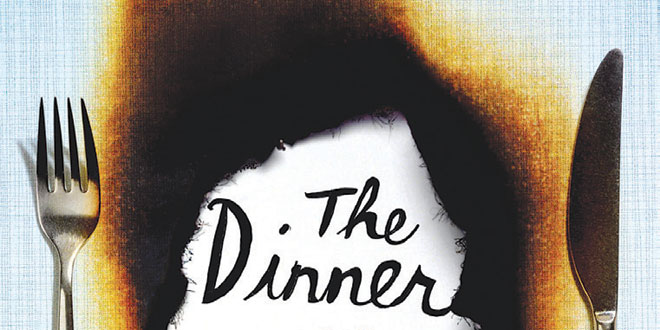 The Dinner is a feast for anyone with a taste for dark humor and satire. I found it to be a positively enthralling story. It is the type of book hard to describe without giving away too much. When I read it, I had no prior knowledge about it except the blurb I read in the public library’s newsletter.

Two couples, each with a 15-year-old son, meet at a fancy restaurant in Amsterdam to discuss said sons who may be facing grave legal consequences for some recent impulsive behavior that resulted in the death of a homeless woman. The father of the boy named Rick is a candidate for prime minister and it is he who proposes the dinner to the parents of the other boy, Michel.  Underline “fancy restaurant” because Rick’s father, Serge, selects this restaurant knowing that it is booked months in advance and only he will be able to get a table on demand. The power play begins even before the dinner.

The story is told in the first person by Paul Lohman, a former history teacher who has been unemployed for 12 years after losing his position due to, well, being himself. Paul is intelligent, irascible, irritable, and has a very dark view of everything and everybody except his wife Claire and their son Michel. Paul does not let the reader in on some details which are omitted because they are “private” or “nobody’s business.” Nothing essential is withheld, just names of restaurants, hospitals, and Paul’s psychiatric diagnosis, a technique that allows Koch to reveal Paul’s guarded nature and maintain a sharp edge to the narration. Almost like a slap in the face to the reader, the sudden appearance of _______ on the page brings home just how testy Paul can be.

Sections of the book reflect the courses of dinner – aperitif, appetizer, main course, dessert, and digestif. With each course, Paul reveals the backstory of his family, Claire, Michel and himself, as well as what he knows of the other couple, Serge, Babette, 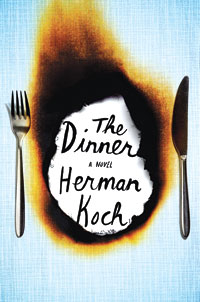 son Rick, Rick’s sister and adopted brother. About half the book is action at the dinner itself and about half is explication of preceding events, layering context with each course.

This is some of the best satire I have ever read. Paul skewers Holland, its prime ministers, fancy restaurants, the justice system, French vacation homes, the French, international adoption, and the Dutch educational system. The use of language throughout The Dinner is masterful. For example, in “Appetizer,” Paul decides to use the men’s room, just to get away from the table. Koch, or at least the translator Sam Garrett, describes a stainless steel wall with “gurgling” water running down and “tinkling” piano music playing, along with mention of jets, streams and velocity when another occupant enters the room. This contextual use of vocabulary is displayed throughout the novel.

I found this book gripping and read it in one sitting. Two pages into the “Aperitif,” I knew I was in for a real treat. I did not particularly like any of the characters in this book, including the teenagers, but it is an extremely well-written book and invites discussion about how far people might go to protect their own flesh and blood, about what it takes to push one to disregard conventional morality and how thin the veil of civility might be.

If you do decide to read this book, know that it is irreverent, satirical, provocative, smart, surprising, and entertaining. It will not give you a warm fuzzy feeling. (It is not Lifetime Movie of the Week, but more like Nat Geo: In The Wild.) But you will want to discuss it after you read it. If possible, have a friend or family member read it as well, meet them for dinner to discuss this book and I doubt you will have any awkward silences from aperitif to digestif.

Maggie Gust is a life-long avid reader whose career path has included working as a teacher and in various positions in the health care field. A native of Illinois, she has lived in Florida since 1993 and presently works from her home here on Marco Island. e-mail: winetaster13@gmail.com