The Difference between Repair and Replace 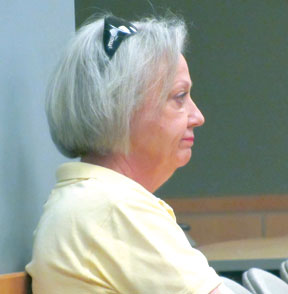 Bill Moore learned an expensive lesson or two at the city’s Code Enforcement meeting on November 13. Representing his wife Margaret, owner of a property at 1270 Stone Court, Moore objected to applying and paying for a permit to repair a docking facility. When the city realized the facility had already been repaired/replaced, Moore was offered the option of obtaining an after-the-fact permit.

Moore strongly resisted, denying any city code had been violated.

City Building Official Bob Maher did not agree, reporting his findings after visiting the property. Maher said the facility had been completely redecked and painted.

“The deck is pristine,” he said, acknowledging he didn’t know who did the actual building. He indicated that Phillips lead screws, which would eventually corrode, had been used instead of stainless steel screws. He went on to explain that a simple repair of replacing up to three boards would not have required a permit, but this was “all brand new”.

Moore, acting as his wife’s attorney, admitted he had done the work himself, replacing the original boards with Wolmanized lumber of the same size. Although he said he had replaced 50 – 60 boards as there was “no way to repair or rescue” the splintered and cracked boards, he insisted the work he had done was “simple maintenance” that had not changed the size of the existing structure.

Not only did city officials not accept this explanation, but neither did the code board members. It was then pointed out to Moore, that he was also in violation of another city code: as an owner of a property that is used for any rental at all, he cannot be an owner/builder. “There is an exemption for a homeowner,” he was told, “as long as the property is not rented.”

The board voted 6-1 (Phil Kostelnik against the motion) that Moore obtain a permit within 30 days and pay $250 administrative costs.

In another case, fines were mitigated for a foreclosed property at 1774 Hummingbird Court, where the homeowner had not connected to the sewer system. Barbara Confer, agent for Coldwell Banker which has an offer to purchase the property, and representing Bank of America, agreed on behalf of the bank to accept a reduced fine of $11,880.38 to be paid within 30 days.

The Islander Restaurant at 1089 Collier Blvd., (Town Center) was cited for failure to remove the Blu Fusion electric sign from its building although that business has been closed for two years. They had covered it with a banner which they were forced to remove as they had not obtained the necessary banner permit. The board voted unanimously that they should apply for the correct permit, remove the old sign within 30 days, and pay administrative fees of $150 or face fines of up to $100 per day until they are in compliance.

The next meeting of the Code Enforcement Board will be on Tuesday, December 11 at 3 p.m. at City Hall. The public is welcome to attend.