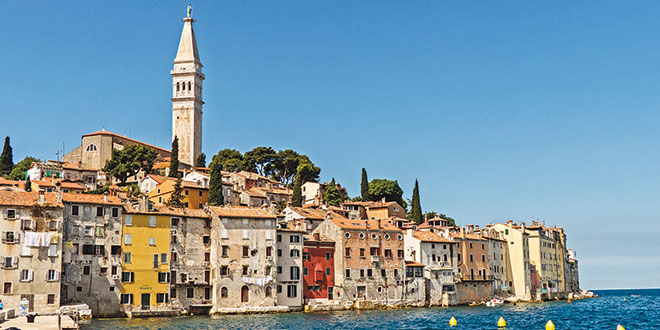 Along the Lungomare in Opatija.

The Croatian portion of the Istrian Peninsula is located in northwest Croatia, along the Adriatic’s Gulf of Kvarnar. Historically, this area was ruled first by the Romans, followed by the Venetians and then the Austrians. For a while in the 1920s, the Italians regained control. Although Istria became part of Yugoslavia in the 1940s, many towns still have two official names — one Croatian, the other Italian. A small part of the peninsula also lies in Slovenia and Italy.

While visiting Istria, the town of Opatija was our home base. I could easily write of the beauty of Opatija; the dramatic coastline; except for a few ugly 1970s hotels at the end of town, the elegance of the Old World Austro Hungarian resort; the charm of the fishing villages around it; the bucolic villages in the hills above where one can find a restaurant that serves venison and wild boar (I had the grilled veggie platter); as well as wineries and olive farms. But, after Dubrovnik and Split, the real draw for us was that it is not a port for cruise ships.

Opatija saw its first luxury villa built in 1844; it now houses the Museum of Croatian Tourism. The town soon became a favored destination for the Austrian nobility.

This restored 19th century villa in Opatija which speaks to its Old World elegance actually houses a shopping center.

Franz Joseph met with Kaiser Wilhelm here in 1894; that same year Chekhov came here for health reasons. Isadora Duncan visited in the early 1900s, and later said that the movements of the palm trees in Optija were the inspiration for her hand and arm gestures while dancing. During the Communist time, Croatians were entitled to subsidized vacations by the sea, and most of the resort areas were “syndicated” for this purpose. According to our local guide, Italy persuaded Tito to keep Opatija out of the “syndicate,” and so it remained a refuge for dignitaries and wealthy travelers.

Opatija — meaning “abbey,” so named for the 14th century Benedictine Abbey that has now morphed into St. Jacob’s church — has much to enjoy. Walk along the Croatian Walk of Fame whose marble stars honor famous Croatians and look for Nikola Tesla’s. Copenhagen has its Little Mermaid statue; in Opatija, a girl with seagull in the harbor welcomes. Catch an outdoor concert in the lush Park Angiolina or a performance in the open-air theater, or just enjoy one of Opatija’s fine restaurants or pleasant bar/cafes. Our favorite one was Tantra, right on the small sandy beach behind Park Angiolina with a full view across the water and back to the town.

Along the Lungomare in Opatija. PHOTOS BY VICKIE KELBER

allure of Opatija is the almost eight-mile-long seaside promenade known as the Lungomare. Strolling along, one sees parks, villas, small beaches, gardens, even a small bamboo forest. For added convenience, clean, modern public restrooms are available along the pathway. About an hour walk on the Lungomare to the North is the once fortified town of Lovran so named for its many laurel trees. Its clusters of medieval houses are built into what remains of the town walls and the 14th century Church of St. George in the small old town has a cycle of frescos dating to the church’s origin. A shorter walk to the South leads to Volosko, a small fishing town noted for its seafood restaurants; one can frequently see the nets used by the fishermen drying in the sun.

One morning we walked to Volosko, headed past the restaurants and cafes along the waterfront that cater to tourists and chose instead a decidedly local outdoor cafe at the end of the promenade; we were the only non-residents there. While we enjoyed some cappuccino, it was quite evident how small a town Volosko is. The postman passed by on his scooter. He noticed someone for whom he had a special package, stopped, and hand-delivered it to him. Another man called 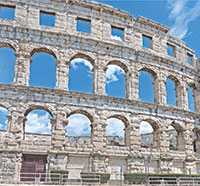 The amphitheater is Pula is just one of its historic sites.

out to ask if there was any mail for him. The postman checked, shook his head no, and continued on with his deliveries.

Rovinj on the other side of the peninsula is well worth a visit. Its attraction is its atmosphere: Venetian-style architecture; narrow, steep alleys; picturesque harbor, ringed with cafes; panoramic views from the height of St. Euphemia’s church. Places such as this always attract artists, and Rovinj is no exception. It had one of the best selections of small galleries and artisan shops that I saw in all of Croatia. A bustling market featuring local fish, produce, truffles and some crafts rounded out the shopping experience.

Not far from Rovinj, near the end of the this triangular-shaped Istrian Peninsula, is Pula, home of an active shipbuilding industry and site of numerous Roman artifacts. Most people come to Pula to see the well-preserved amphitheater, but there are other sites worth noting as well. There is evidence that habitation of Pula dates back 1 million years. Popular legend is that Pula was where the Argonauts, who had stolen the Golden Fleece, settled after their leader Jason was killed. Begun in 27BC, the Pula Arena seated more than 20,000 and was part of the circuit of the gladiators. Today, it seats no more than

Local specialties – truffles, lavender, and olive oil at the market in Rovinj.

8,000 for the many performers who have appeared there, including Luciano Pavorotti and Andrea Bocelli. There are other classical and medieval sites of note, including the Temple of Augustus and two Roman gates, as well as a fine Archeological Museum; the tourist information office on the main square (Forum) provides a very good map. If you go to Pula and it is not too hot, try to visit the amphitheater in the afternoon, as most of the tour groups tend to go in the morning. Don’t forget to explore the underground as well as the viticulture and olive oil exhibit there with its many ancient amphoras.

The largest of Croatia’s 1,000 islands is Krk located in the Kvarner Gulf and easily accessible. Krk Town’s well preserved old town still sports some of the original wall, three Venetian gates, mosaics from Roman baths, and requisite churches and cathedral. Although the northern part of the island is fairly bare due to the bura winds, the southern part is lush. The inland vineyards are known for their white wine, Vrbnicka Zlahtina, and the town of Vrbnik on the East coast of the island offers wine tasting. A peaceful, small island just off Krk, Ko‰ljun, is accessible by boat, and is inhabited by Franciscan monks who maintain a museum at their monastery.