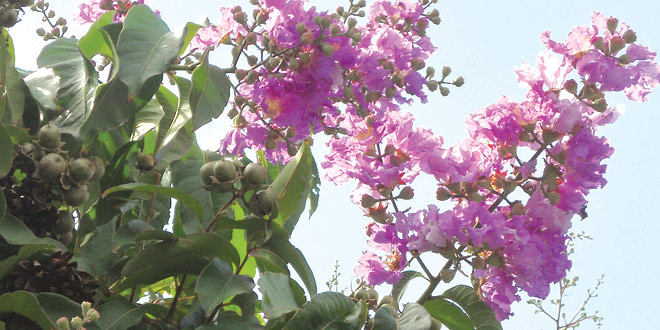 I’d like to introduce you to one of South Florida’s most magnificent landscape plants… Crape Myrtle. Originally grown in Japan, China and parts of Southeast Asia, it’s the supermodel of the plant world. It’s beautiful and a real head turner, of course, but crape myrtle is versatile, too. You can have it in either shrub or tree form and in myriad colors, including purple, white, pink, red, or a combination of colors. Even the bark on this plant is attractive!

The lovely crape myrtle blooms all summer long and into the fall, with long-lasting, crepe-like textured flowers that form large clusters of one to two-inch flowers at the tip of each branch. The blooms on the crape myrtle are so large and profuse, its branches appear to be weeping toward the ground.

The crape myrtle is deciduous. Still stunning in Florida landscapes during the winter months, its bark takes on a striking exfoliated appearance that ranges from tan to white to coffee brown. And, for us Northerners who miss fall 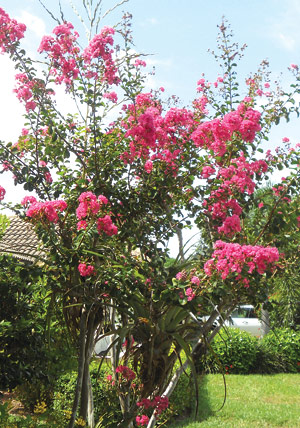 color, crape myrtle amazes during the autumn months in hues of red, burgundy, yellow and orange. It’s almost like being back in New England… almost.

Amazingly, this “supermodel” is not high maintenance. Crape myrtle thrives in full sun and high humidity, and is drought tolerant. And, it’s not the least bit finicky. It even flourishes in poor soil, which makes it perfect for South Florida landscapes. My personal favorite is the raspberry-colored cultivar, which is drop-dead gorgeous!

In order to maintain your crape myrtle’s pretty appearance, you’ll want to prune it in winter or early spring. Trim off all suckers and branches up to about four feet. Proper pruning will expose its beautiful bark and improve air circulation, which is very important for maintaining a healthy appearance. Never chop your crape myrtle down to a stump. This will ruin its natural shape and weaken its branches. Strong branches are vital during the summer months, because they support the massive flower clusters growing on the tips of the limbs. I recommend using hand pruners 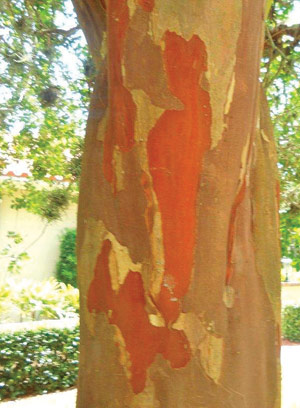 and trimming two to three feet off the top of your crape myrtle. During flowering season, you can promote a second light flush of flowers by deadheading old blooms.

If you’re looking for a large evergreen specimen, choose the Queen crape myrtle (lagerstroemia speciosa), known as one of the most spectacular flowering trees in the world! Originating in tropical India, this majestic tree blooms in June and July. The Queen crape myrtle’s leaves will turn red before falling in the winter, but will soon recover. It’s fittingly named Queen crape myrtle because it produces massive profusions of pinkish blooms on foot-long panicles, and can reach 40 feet in height. Of course, you can maintain a smaller height by regular trimming.