The Condee Man Can…and has for 45 years! 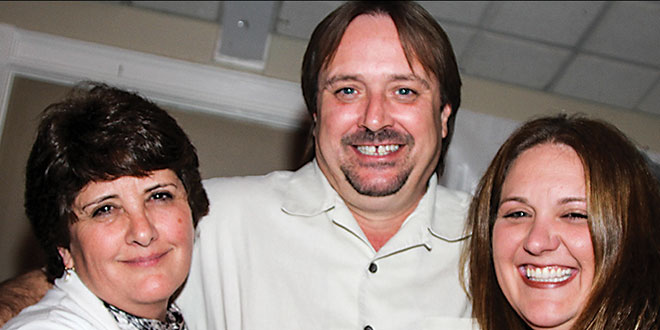 Condee Cooling and Electric recently celebrated 45 years of service to this community, and beyond. The momentous occasion was celebrated with employees and spouses over dinner at Bistro Soleil.

The company was started by Don Condee, Sr. Originally from Illinois, Don (Senior as he was affectionately called by employees) had his pilot’s license and loved to fly. He found Marco Island in the early 1960’s when he flew to Marco Island with his friend Ed Husted, who worked for Deltona and had invited him to take a 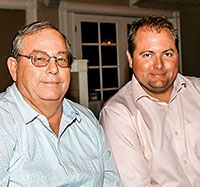 look at Marco as an investment opportunity. After running several successful businesses in Illinois including propane gas, electrical, refrigeration, heating, and air conditioning services, he saw a need for similar services on Marco Island.

Thus, Condee Cooling was born in 1969. According to Donald “Erik” Condee; the third generation with Condee Cooling, “Deltona was building homes and condominiums at that time; however, their service was not able to provide 24 hour mechanical service. Condee Cooling and Electric’s success was built upon providing quality services whenever needed, which included evenings, weekends, and

Erik hands a gift of appreciation to Jeff Pratus.

In 1973, Don married Mary Lou Reynolds and the two worked to build the business here in Marco. Don Condee II, the second generation with Condee Cooling, was still in college when Senior made the move to Marco Island. Don ran the company in Illinois until 1979. “My dad called one day and said he needed my help on Marco. So, I made the move, along with my wife and son, Erik.” Erik was just an infant at the time.

Don, Sr., passed away at the 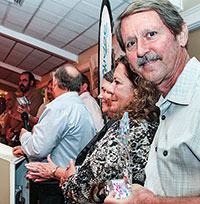 Not only has the company impacted the face of business and enterprise on the island, it has enjoyed generations of employees within the same family.

Imagine, a company that has 60 plus employees at any given time with many having been employed for 20, 30, 40 plus years. A lot can be said about a company with that type of longevity and loyalty from its employees. Condee Cooling and Electric has impacted hundreds of employee’s families over the years, which in turn spreads out to the community. In fact, Condee Cooling and Electric has several generations of customers as well as employees, another telltale sign of a successful honest, reputable company.

Don and Erik had few

words at the podium except to extend their appreciation for everyone’s contribution to the success of the company. Twenty employees were recognized for 10+, 20+, 30+, and 40+ years of service with the company. Greg Schneider has more than 40 years of employment followed by Debbie Lee with 30 plus years. Department heads each had a few moments at the microphone thanking the Condee Family and thanking their department’s workers.

It was a beautiful evening fitting of the celebration. According to Erik, “Our goal today, is the same as it was 45 years ago, we’re here to serve you.”