The China Syndrome: The Week That Was 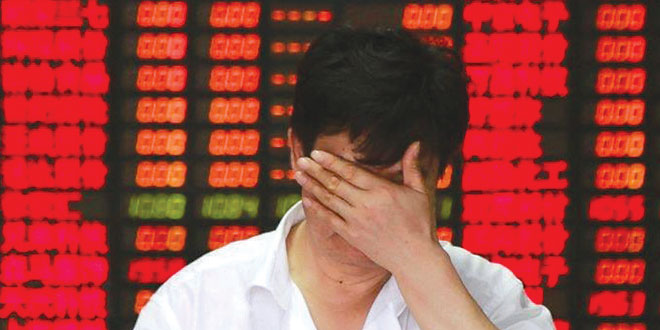 Question: Could you explain what happened to the stock market during the first week of 2016?

Answer: That’s a tall order, but here’s my best shot at describing a few of the market moving events that took place during that first week. For starters, China took center stage, overshadowing everything else. To borrow from the 1960s BBC political satire show featuring David Frost, “that was the week that was.” For anyone associated with financial markets in any way, the “week that was” couldn’t have ended soon enough.

First, China came in with reported disappointing manufacturing data reports. This wasn’t a big surprise. Their economy is beginning the shift from a pure focus on manufacturing and moving towards a more service-centric system.

As any country’s economy grows and matures, expansion based on manufacturing eventually reaches a peak. The next phase relies more on consumer consumption and service industries for continued expansion. The transition from an export-oriented and manufacturing economic system takes time and isn’t always easy.

When U.S. markets opened on Monday, January 4, 2016 we were prepared for volatile trading. Overnight, China’s market had dropped five percent. Chinese trading authorities put circuit breaker mechanisms in place on that day, which were designed to prevent excessive market volatility. For instance, If Shanghai’s market fell five, it would shut down for 15 minutes, giving traders time to regroup; if it fell seven percent, the markets would close for the rest of the day.

By Thursday, January 7, 2016 both circuit breakers were triggered, dampening investors’ moods. Markets closed for the rest of the day after only being open for less than half-an hour. Investors began to question whether policy makers had the ability to stabilize markets. The instruments employed to prevent excessive market volatility actually caused more uncertainty. Then, in attempts to solve the problem, China went on to scrap the use of circuit breakers, and also reversed their decision to restrict large shareholders from selling their stock.

Along with the discouraging manufacturing data, Chinese investors faced another disappointment when a ban they thought would be lifted was not. Last June, after markets fell thirty percent, a six-month ban on those types of sales was put into place to decrease instability and downward pressure on stocks. The ban was to have been lifted on Friday, January 8, 2016. During the first week of “the week that was,” China decided to keep that restriction in place to reduce potential market shocks. The combo of this, the manufacturing data and the circuitry breakers drove markets into a tailspin. Since we are such a globally connected economy, activity in other countries does influence our markets based on sales, confidence and future growth levels.

By Friday, China went back on yet another policy. In the past they had a policy whereby the government was not allowed to step in to purchase stocks. This rule was eradicated and the government did buy stock, effectively propping up the market. Many wondered why they bothered with any of the regulations if they could so easily go back on them in attempts to stabilize their markets, causing some investors to become reluctant to participate in the Chinese stock market going forward.

The Sage of Omaha

“Buy on the assumption that they could close the market the next day and not reopen it for five years,” is sound advice from Warren Buffet. Obviously, not many investors embraced his wisdom, selling at the most inopportune times, and helping to drive world markets downward. For U.S. investors, it felt like a replay of last summer, where worries about China and the pace of Fed interest rate increases overpowered signs of gradual improvement in our domestic economy.

Meanwhile, back in the good old U.S.A., our manufacturing data reached its lowest level since the recession began, and construction spending reports came in below expectations. And, if that wasn’t enough bad news, Saudi Arabia and Iranian tensions increased. Still, the broad range of labor market data suggests that the economic recovery remains on track. Nobody also said that investing was easy. Such anxieties may be likely to come and go repeatedly during 2016 as volatility continues.

According to the Chinese calendar, this is the Year of the Monkey. The Chinese Fortune Calendar describes the monkey as a “smart, wily, naughty, and vigilant animal,” suggesting that in order to be successful in the markets this year, we’ll need to outsmart the monkey. Keep your investment policy statement and financial plan handy and consider reviewing it as we begin the New Year. Stay focused and invest accordingly.

Investing involves risk including the possible loss of capital. There is no assurance that any investment strategy will be successful. Asset allocation and diversification do not guarantee a profit nor protect against loss. The opinions expressed are those of the writer, but not necessarily those of Raymond James and Associates, and subject to change at any time. Information contained in this report was received from sources believed to be reliable, but accuracy is not guaranteed. International investing involves additional risks such as currency fluctuations, differing financial accounting standards, and possible political and economic instability. These risks are greater in emerging markets.

“Certified Financial Planner Board of Standards Inc. owns the certification marks CFP®, CERTIFIED FINANCIAL PLANNERTM, CFP® (with plaque design) and CFP® (with flame design) in the U.S., which it awards to individuals who successfully complete CFP Board’s initial and ongoing certification requirements.”