The Care and Handling of Roses with Thorns 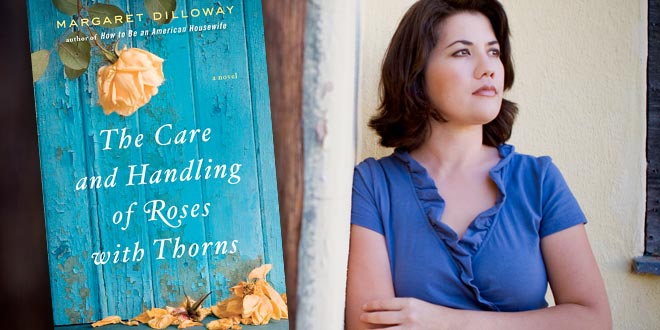 I would be curious to know what percentage of the readers of this column are women and what percentage are men. My gut feeling is that it is the kind of thing primarily read by women, but I could be very wrong. As I have said before, I try to vary the books I read so that at least some appeal to both men and women. I probably haven’t written any “Remarks” that would only appeal to men but I am sure I have written quite a few that lean strongly to the feminine reader. After reviewing the 36 columns that I have written I would say that 14 of them are written about books that either would enjoy. Certainly I don’t want to write about nothing but mysteries, which would appeal to a lot of men and women, though it would be easy for me to do so as I read a lot of them. Since, in my heart, I believe that most of my readers are women I hope I will be forgiven for reviewing another book that they might enjoy.

Galilee “Gal” Garner is a thirty-six year old biology teacher at a Catholic high school. She raises roses as a consuming hobby, hoping to propagate a rose that has never been bred that will win her honors, ribbons and recognition. And she has been waiting for a kidney transplant, after two failures, for eight very long years. Almost all of her life her need for care due to her bad kidney has affected not only her personally, but the lives of both of her parents and her sister Becky. It has affected her physical size. It has affected her personality. She is limited as to what she can eat. She is limited as to how much and what she can drink. And every other night of her life she has to stay in the hospital for dialysis. All of this has left her with little patience for those whose lives are so much easier than hers. She believes in hard work and study and has no trouble failing her students who expect good grades while giving little in return. Her life follows a very set, and boring, pattern and her only real joy in life is her green house and the roses she is growing within it.

Then everything changes when her sister Becky’s teenaged daughter arrives, unannounced, on her doorstep, prepared to stay. Becky has been far from a good mother. She has been into drugs and alcohol, heavily. And now she has followed a job that has taken her to Hong Kong for an unknown amount of time. And her daughter, Riley, has been literally dumped upon “Gal’s” doorstep, black hair, Goth/Ralph Lauren clothing combination and all. To say she is shaken by this unexpected event would be an understatement. We all know what living with a teenaged girl can be like, but it becomes even more difficult when the child has been ignored much of her life and is feeling very much deserted by her mother. Luckily Riley seems willing to try to fit into her Aunt’s life and the new school where she knows nobody. She dyes her hair back to some semblance of its natural color, starts wearing the uniforms required at the school without a fuss and attempts to make friends. But she is not a natural student and has trouble living up to her aunt’s expectations of school work. She does her best to help her aunt by offering to help in the greenhouse but is quickly rebuffed. Gal is more than just particular about who touches anything to do with her roses. She is a fanatic and seems convinced that only she is capable of caring for them and lives in fear that someone else could erase all of her years of hard work in developing a new variety of rose.

Gradually each begins to understand the other and make accommodations for the other’s needs and desires. Slowly, affection develops between the two and they become a family.

When Becky returns for her daughter, claiming that she is no longer a drug or alcohol user, we are torn as to what we want for all three of them. Gal finally begins to realize that much of Becky’s years of rebellion were a cry for attention as a result of her being pushed aside by her parents because so much time had to be spent in caring for Gal.

At the end of the book you understand that we are all roses with thorns. Some of us are pricklier than others, but all of us require special handling and care to grow and flourish.