The Black Mountains and Bay of Kotor 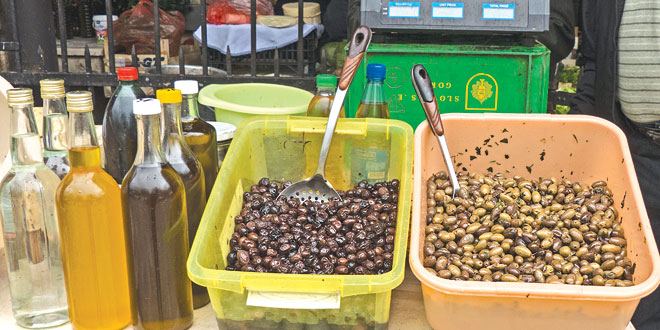 A sampling of the local products at the market outside the walls of Kotor.

In the Middle Ages, the area now known as Montenegro was referred to as Crna Gora; the country’s official name today is Republika Crna Gora, which translates as “Black Mountain.” The name Montenegro, also meaning black mountain, is Venetian in origin. Unlike the interior and its neighboring countries, the coastal region of Montenegro was never under the control of the Ottomans; Venice ruled the coast from the 1400s until almost 1900. South of Croatia along the Adriatic Sea, Montenegro also borders Bosnia and Herzegovina, Serbia and Albania.

Although Montenegrins participated in the Balkan Wars with Serbia against Croatia and Bosnia in the 1990s, they escaped the widespread destruction experienced in some of the other former Yugoslav countries. There was some bombing by NATO forces, but they were primarily military targets. For a while after the dissolution of Yugoslavia, Montenegro joined first a federation and then a loose union with Serbia until a vote for independence in 2006.

Historically, Montenegro, a country slightly smaller than Connecticut, had used the Deutsch Mark as its currency. When Germany changed to the Euro, so did Montenegro although it was not a part of the European Union. It has been a candidate to

Walking the ramparts of Budva. PHOTOS BY VICKIE KELBER

join since 2010. Although officially Montenegro uses both the Latin and Cyrillic alphabet, the Latin predominates particularly along the coast.

Just south of Dubrovnik, the coast of Montenegro is an easy day trip from that city and popular tourist destination. The line of tour buses at the border can be long; if going on your own, try to cross as early in the day as possible to avoid delay.

When Tito ruled, he had a villa in each republic of Yugoslavia. His in Montenegro is just over the border from Croatia and is now a luxury resort. Signs advertising future luxury development attest to the attempt to upgrade that area from its now somewhat rundown aura.

The Bay of Kotor is a UNESCO Natural Heritage Site. Although it is often referred to as Europe’s southern most fjord, it is actually a ria, or submerged river valley. It has a Mediterranean climate, but the day we visited, it was raining. Despite the fog and gloom, the beauty of the area with dark mountains coming down to the sea, jagged coastline, fishing villages and occasional sandy beach or mountain top fortress was evident. I couldn’t help imagining how alluring the reflection of the 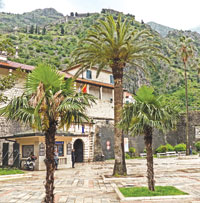 The entrance to the medieval city of Kotor.

black mountains must be on a clear day.

Whether just driving around the bay or going on to visit the historic fortified towns of Kotor and Budva, a short ride on the Lepetanij-Kamenari ferry cuts out almost 20 miles of driving.

Kotor is an ancient port built abutting a cliff. Another UNESCO World Heritage Site, its Old Town — Stari Grad — is encased in walls with fortifications that were built by the Venetians towering above. Entering through the main gate, one is met with the sight of a town square of medieval splendor. There is a Maritime Museum, cathedral, orthodox churches, squares and other buildings

The walled city of Kotor.

of note, but the real pleasure is just wandering about the jumble of streets and alleys. The Old Town is small; you won’t get lost. The restaurants and cafes are inviting. On the gloomy, rainy day when we visited, we looked forward to taking a break for a coffee or cappuccino in a cozy cafe, but the electricity in the Old Town was out. We had to settle on a Coke and a tonic instead. It wasn’t a particularly stormy day, and we learned that power outages were not unusual here.

Just outside of the walls is a small market with wonderful fresh produce, fish and meat. We sampled some olives, candied almonds and dried figs, but walked away without purchasing any of the wonderful pr‰ut, or prosciutto, on display.

One can climb the fortifications, ascending more than 700 feet first to The Church of Our Lady of Health and then on to St. Johns Fortress. The church was so named due to a belief in its healing powers — not because one has to be healthy to make the trek! The views from there are supposed to be magnificent, but, alas, the rain (not to mention my husband’s glare 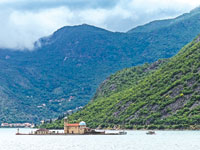 Our Lady of the Rocks in the Bay of Kotor.

at my suggestion to do so) prevented us from making the climb.

Equally attractive but perhaps slightly less charming is the coastal town of Budva. The Old Town, on a site which is indeed one of the oldest outposts of civilization on the Adriatic, is also of Venetian origin. Two earthquakes, the most recent in 1979, have necessitated much restoration. There are churches and a Citadel to be seen, as well as many small shops. One can walk the ramparts around the town enjoying views into the city and out to the Adriatic.

About half an hour south of Kotor, Budva is the gateway to what is known as the Budva Riviera (Budvanska rivijera) due to what are called sandy beaches but which I would describe as pebbly resorts and active nightlife. Adjacent to the Old Town is Budva marina with its many boats and yachts and perhaps testimony to the claim that this area is home to the most millionaires per capita in Europe. It also is claimed to be the smallest town in which The Rolling Stones have held a concert….and a Madonna concert a year later. Stretching out from the marina is the beach and main promenade, site of most of the nightlife.