The Argo Backs into the Sky 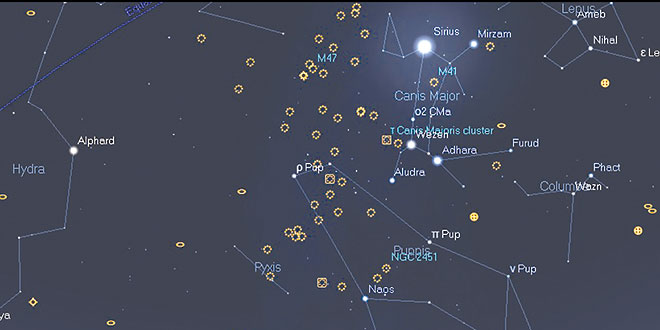 Looking Southeast, 9 PM, Feb. 20. Can you make out the stern of Argo? SUBMITTED PHOTO

Tonight, we look again into the Southeast where the ancient constellation Argo, the ship, is rising stern first into the sky.

Argo is no longer counted as one of the 88 constellations visible in the night sky; about two centuries ago it was found to be inconveniently large so it was broken into four separate constellations, Carina the keel, Puppis the deck, Pyxis the compass and Vela the sails. The old Argo is so large and deep in the southern sky that it never is completely above our horizon at the same time, the stern sinking in the Southwest before the bow rises.

Canopus, hanging low in the South, is the second brightest star in the sky only surpassed by the nearby Sirius. Southern stargazers are rather lucky as Canopus is never visible north of the Tennessee border. The old Argo is buried deep in the Milky Way and sweeping the area with binoculars can be a rewarding experience.

Also rising in the Southeast is Hydra, a rather faint but a very long constellation. It stretches across roughly one-seventh of the whole sky. Hydra started rising about sunset and won’t completely clear the horizon until almost midnight. Despite its great length, it contains only one star of modest brightness, Alphard, appearing rather orange in binoculars.

Now, look at Canis Major; hanging like a tag from the neck of the dog, is M41. This star cluster might be the faintest object ever recorded by ancient astronomers. I have only seen it by naked eye once in the dark skies north of Everglades City; it’s an easy object for binoculars though.

On Feb. 22, Venus and Mars will pass each other only separated by about the diameter of the full Moon. It’s purely a line of sight phenomena; the planets are separated by many millions of miles. Look in the West shortly after sunset, Venus at least will be impossible to miss. This event is called a conjunction, and they are fairly common. In fact, Venus will be in conjunction with every planet except Saturn during the next few months.